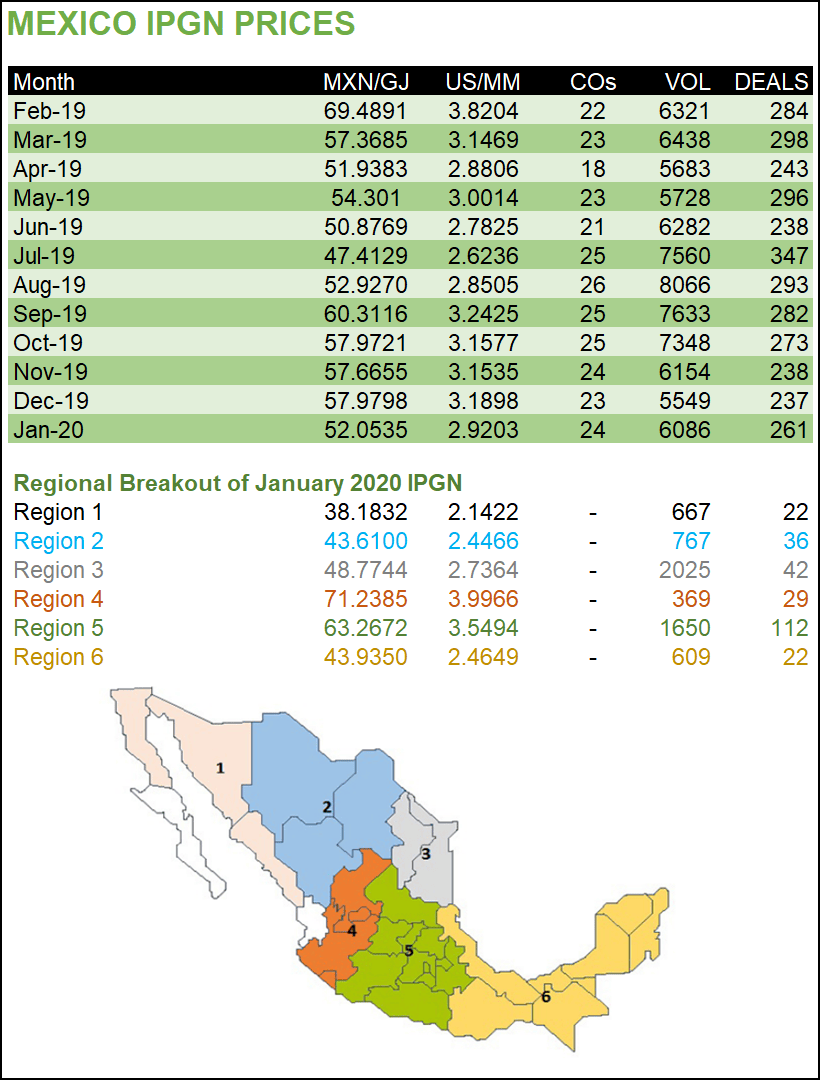 Pipeline exports from the United States to Mexico, meanwhile, averaged an estimated 4.5 Bcf/d during the first half of May, according to Genscape Inc., down from 4.95 Bcf/d reported in May 2019 by the U.S. Energy Information Administration (EIA).

“This average will likely tick up by the end of the month as the Mexican government’s Covid-19 contingency plan allows for a gradual reopening of some industrial/business sectors,” Genscape’s Ricardo Falcon, natural gas analyst, told NGI’s Mexico GPI.

Because of Mexico’s heavy reliance on gas imports from the United States, Mexico prices tend to move more or less in lockstep with U.S. benchmarks Henry Hub, Waha and Houston Ship Channel, with transactions typically priced using one of these plus the cost of transportation.

The IPGN compiles day-ahead spot sales in the Mexico market, and is meant to serve as a reference until third-party indexes emerge at potential gas trading hubs such as El Encino, Monterrey or the Bahío region.

CRE used 274 transactions reported by 26 marketers to calculate the latest IPGN, versus 252 transactions by 18 firms in the year-ago month.

Markets have struggled to get a handle on the impact that Covid-19 may have on the fuel’s supply and demand fundamentals, as evidenced by recent volatility in natural gas futures markets.

The Henry Hub contract for June delivery gained 62 cents to settle at $1.793/MMBtu on Tuesday.

In the United States, the EIA is forecasting that natural gas consumption will fall by 3.4 Bcf/d in full-year 2020, driven by a 1.6 Bcf/d decline in the industrial segment. The forecast is driven by the expected impact of Covid-19 on economic activity, as well as milder-than-normal temperatures already seen in the first quarter that reduced demand for space heating in buildings, EIA analysts led by Stephen York said Tuesday.

Bank of America Corp. (BofA) analysts now expect Mexico’s economy to contract by 10% in 2020 and recover 2% in 2021, down from previous forecasts of an 8% contraction followed by a 4.5% recovery. The revision is because of external and domestic factors, analysts said Tuesday.

In Mexico, BofA sees gross domestic product (GDP) in the second quarter of 2020 falling by 40% sequentially and 12% year/year (y/y).

“We expect the recovery to have an elongated U-shape that will most likely leave the level of GDP below the pre-coronavirus level even by the end of 2021,” analysts said. “Such a deep recession would terminate more than 1 million formal jobs in 2020.”

The formal jobs figure only tells part of the employment story, as the informal economy, i.e. jobs in which workers are paid in cash and do not pay taxes, accounted for 31 million jobs, or 56.1% of employment in the country as of January, according to national statistical and geography institute INEGI.

“Fiscal and monetary stimulus in Mexico is not laying the ground for a quick recovery,” said analysts, citing that fiscal stimulus measures in response to the current economic emergency account for less than 1% of GDP.

“The real interest rate from the central bank is still in positive territory,” analysts said, adding that a central bank program to give loans to small and medium firms impacted by the coronavirus is not yet in effect. Equal to 1.1% of GDP, this would be the largest program to help the economy amid the pandemic, the BofA team said.