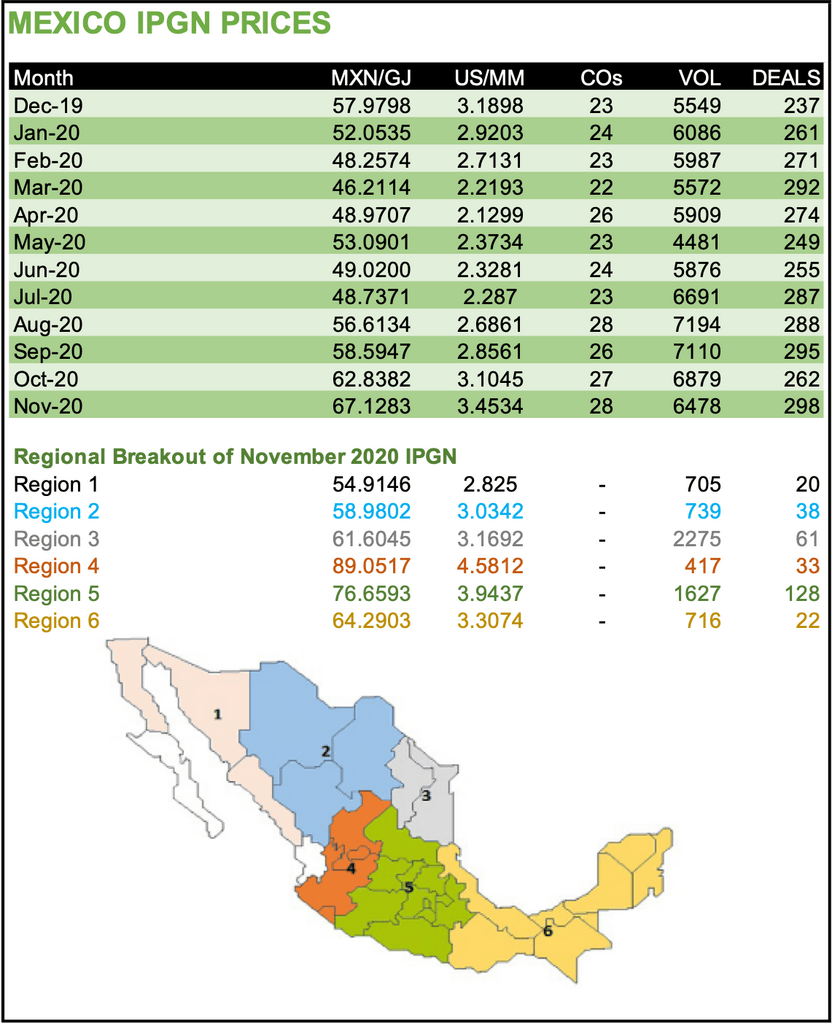 CRE compiles the index based on day-ahead spot prices reported anonymously by marketers.

CRE used 298 transactions reported by 28 marketers for a total volume of 6.48 Bcf/d to calculate the latest index, up from 238 deals from 24 companies for 6.15 Bcf/d in the similar period last year.

U.S. prices were boosted in November by surging exports of liquefied natural gas (LNG), which hit a record monthly high after plunging to their lowest levels in more than two years over the summer amid the Covid-19 pandemic, according to the U.S. Energy Information Administration (EIA).

A cold start to the winter in Asia combined with fewer pandemic-related restrictions has driven spot LNG prices to their highest level in over two years, researchers said.

In its latest Short-Term Energy Outlook, EIA also forecast monthly average spot prices of $3.01/MMBtu for full-year 2021, up from a forecast average of $2.07/MMBtu for 2020.

The dynamism of LNG exports from the United States to Asia points toward continued strong pricing of natural gas over the near-term, said independent Mexico City energy analyst Rosanety Barrios in a webcast panel last week organized by the #WeTweetEnergy collective of Mexico energy experts.

Pipeline gas imports from the United States, which have continued to break records even through the pandemic, should — in theory —  rise further upon the commercial startup of Grupo Carso’s 472 MMcf/d Samalayuca-Sásabe pipeline. The pipeline is in the testing phase and slated to enter service this month or in January, connecting West Texas gas supply with the Sásabe area of northwestern Mexico.

This is good news for the Mexican market, Prud’homme told NGI’s Mexico GPI, although until Sempra Energy’s Guaymas-El Oro pipe enters service, flows on the Carso pipeline are likely to be limited.

Completion of Guaymas-El Oro is held up by a faction of the local Yaqui indigenous tribe that opposes it.

Fellow panelist David Rosales said that the marine pipeline, as well as Fermaca’s recently completed Waha-to-Guadalajara pipeline system, are expected to spur investment in new gas-fired power plants, but that progress on this front has been slow due to permitting delays and energy policies of the current government meant to favor state-owned generator Comisión Federal de Electricidad. 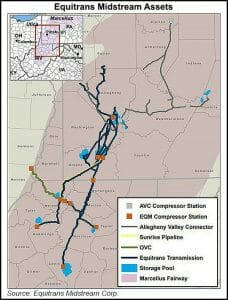 Equitrans Midstream Corp. is making headway to increase natural gas connectivity in the Appalachian Basin, with management evaluating shipper interest received during a recent open season. The binding open season was related to Equitrans’ transmission system. It would increase shipper access to downstream markets in the Midwest and Gulf Coast, primarily through existing delivery interconnects…