The volume of reported natural gas trades in Mexico totaled 7.52 Bcf/d in August, representing a 14.2% jump from July and a year-to-date high. 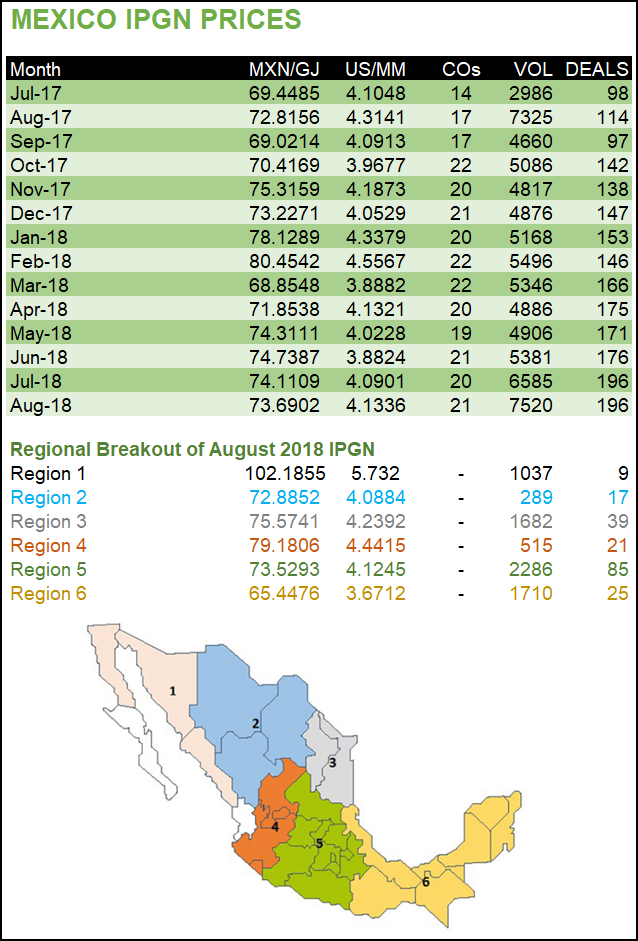 On a year-over-year basis, the volume of gas traded was up from 7.33 Bcf/d, while the IPGN increased from 72.82 pesos/GJ ($4.31/MMBtu). The number of transactions reported in August inched up by two to 207 from July, the report said.

The IPGN is derived from mandatory, monthly post-transaction reports filed by marketers, and reflects the average price/molecule of gas plus transport costs. Market participants typically use the Houston Ship Channel, Henry Hub or Waha benchmarks to calculate the price/molecule. Imports from the United States currently account for about 85% of total gas supply in Mexico, according to data from energy ministry Sener.

In peso terms, prices fell sequentially in August in three of Mexico’s established trading regions and increased in the other three.

The largest price drop was seen in region one, to 102.2 pesos/GJ ($5.73/MMBtu) from 116.1 pesos/GJ ($6.41/MMBtu). Region one contains the northwestern states of Baja California, Baja California Sur and Sonora.

The largest increase in trading volume was reported in region three, which includes the northeastern states of Nuevo LeÃ³n and Tamaulipas, to 1.68Bcf/d from 992 MMcf/d.

The monthly IPGN report is meant to be a transitory measure to approximate gas prices until third-party indexes emerge in the country’s newly liberalized natural gas market.

The ComisiÃ³n Reguladora de EnergÃ­a (CRE) announced in August that it had approved the second and final phase of the contract release program.

Although leftist President-Elect AndrÃ©s Manuel LÃ³pez Obrador has expressed opposition to the reform and to the breakup of Pemex’s vertically integrated model, he has not pledged any gas-specific policy measures, other than a general mandate to reduce dependence on gas imported from the United States.