Mexico may not be able to reverse its current trend of declining natural gas output for another four to six years, a period during which gas demand from the power sector is projected to accelerate, according to the latest analysis by OPIS PointLogic. 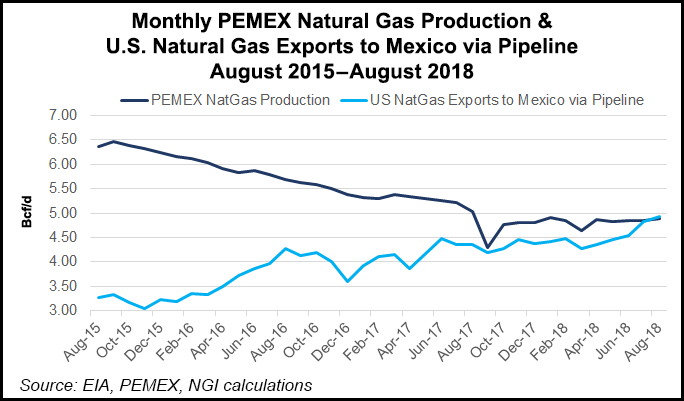 “We don’t see a bottom yet,” PointLogic’s Warren Waite said Monday in San Antonio, TX, at the US-Mexico Natural Gas Forum sponsored by LDC Gas Forums. He noted that Mexico’s gas output plunged by 1.5 Bcf/d between 2015 and 2017, an amount equal to about 19% of the country’s current gas market.

The key unknown variable for production in the near future is the “action or inaction, [the] decisions of what the new administration will be,” said Waite, who is PointLogic’s associate director for energy research and analysis.

What is all but certain, however, is that growth in gas demand from the power sector will outpace the rate of the production decline over the next five years, Waite said. PointLogic expects Mexico gas demand to rise by 1.1 Bcf/d during the span, with production expected to fall by 0.5 Bcf/d.

As a result, Mexico’s total gas imports are forecast to grow by 1.6 Bcf/d between 2018 and 2023, with the northwest, north and northeast regions expected to account for 75% of the demand growth.

Piped gas imports from the United States, which PointLogic expects to average 4.7 Bcf/d this year, are seen growing by another 2 Bcf/d over the five-year stretch, Waite said. Gas sourced from the United States, including both piped gas and liquefied natural gas imports, currently accounts for about 64% of Mexico’s demand needs, a figure Waite said will likely surpass 70% over the coming years.

Mexico has added 13 GW of gas-fired generation capacity over the last five years, with another 10 GW slated to come online by 2023.

Fortunately, Waite said, pipelines with total capacity of 11.4 Bcf/d have been added in Mexico since 2012, and the country has nearly achieved its goal of adding 10,000 kilometers (6,214 miles) of pipeline by 2019.

Another 5.6 Bcf/d of pipelines are slated to enter service in 2018-2019, including the 2.6 Bcf/d Sur de Texas-Tuxpan marine pipeline, which is expected to ease supply shortages in the south, where the decline in domestic gas output has been most acute.