Natural gas marketers in Mexico transacted a record high volume of 8.07 Bcf/d in August, according to the IPGN monthly gas price index published by the Comisión Reguladora de Energía (CRE). 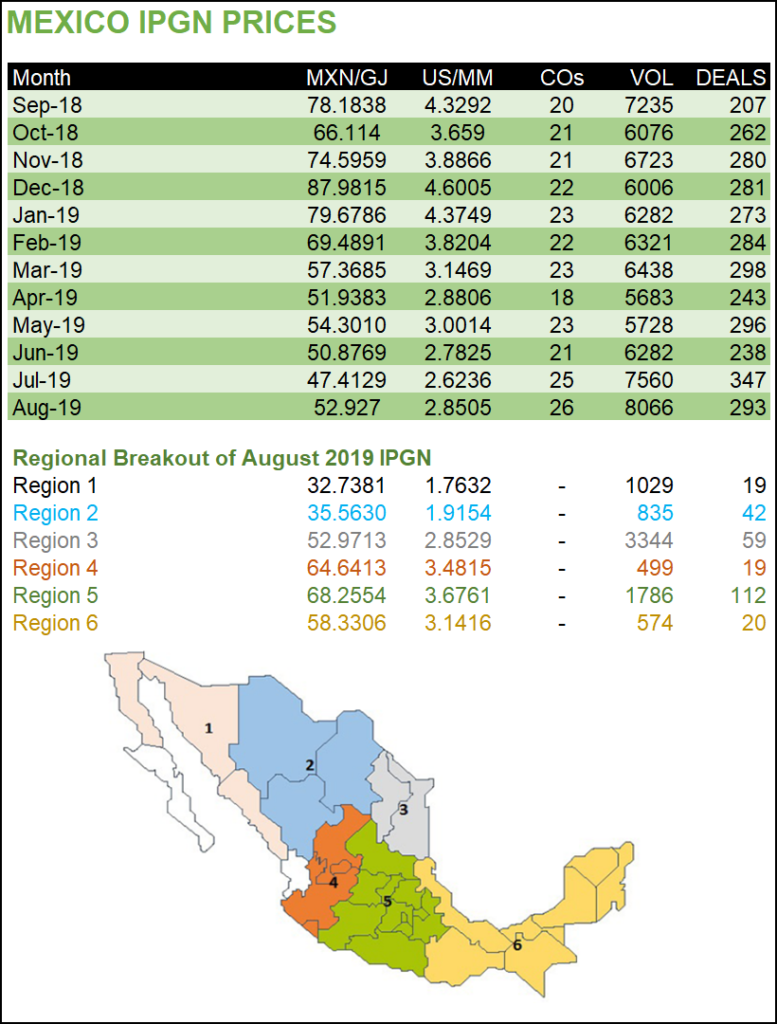 The previous record of 7.56 Bcf/d had been set in July.

Region 1, which covers the northwestern states of Baja California, Sonora, and Sinaloa, reported the lowest average price at $1.76/MMBtu.

Region 3, which comprises the northeastern border states of Nuevo León and Tamaulipas, saw the highest volume of gas transacted at 3.34 Bcf/d.

Created under the framework of Mexico’s 2013-2014 constitutional energy reform, the IPGN is meant to serve as a reference for prices until the gas market attains enough liquidity and transparency for third-party indexes to emerge.

Due to Mexico’s dependence on pipeline imports from the United States, a majority of gas transactions in Mexico are priced using U.S. indexes such as Henry Hub or Houston Ship Channel, plus the cost of transport.

Nationwide production of natural gas, including output from Pemex and the private sector, averaged 3.76 Bcf/d in August, up from 3.63 Bcf/d at the same time last year, according to the Comisión Nacional de Hidrocarburos (CNH).

The government announced on August 27 that CFE had renegotiated the terms of its firm transport capacity agreement with IMG, a joint venture between TC Energy Corp. and Infraestructura ENergética Nova (IEnova).

On Sept. 11, CFE announced a corresponding agreement with Mexican company Fermaca on the final two sections of the informally named Wahalajara pipeline system.

The sections comprise La Laguna-Aguascalientes and Villa de Reyes-Aguascalientes-Guadalajara, which will have the capacity to transport 1.189 Bcf/d and 886 MMcf/d, respectively.

Startup dates for the other pipelines remain unclear.

TC Energy’s Tuxpan-Tula and Tula-Villa de Reyes pipes are held up by the pending completion of an indigenous consultation and archaeological rescue, respectively.

Once these steps are concluded, the remaining construction time for the projects will be 12 months and 11 months, respectively, according to a document published in August by energy ministry Sener.

Grupo Carso said in an August 27 regulatory filing that the 472 MMcf/d Samalayuca Sásabe pipeline was still under construction, but did not provide an expected in-service date.