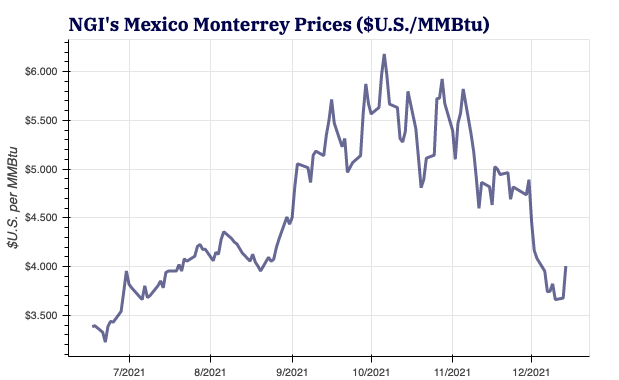 NGI’s Mexico GPI has narrowed down an eventful year to the five key stories that defined Mexico’s natural gas market in 2021. These stories are:

Winter storm Uri in February wreaked havoc not only in Texas but also in Mexico. The freak cold snap caused a 20% plunge in natural gas production in the south-central United States as power demand surged. Texas Gov. Greg Abbott then issued an executive order restricting natural gas exports outside the state. Pipeline natural gas deliveries from Texas to Mexico fell by more than 1 Bcf/d to slightly above 4 Bcf/d at the peak of the cold weather event and for a period over the course of a few days four million Mexican customers lost power.

Prices at the Waha and Houston Ship Channel hubs, both of which are closely linked to gas prices in Mexico, hit $206/MMBtu and $400/MMBtu, respectively, at the height of Uri. The fallout lasted for months with some customers in Mexico unable to pay their bills, resulting in lawsuits and souring trade relationships. The affair also underlined Mexico’s dependence on U.S. gas and pushed plans for natural gas storage in Mexico to the forefront of energy policy. A 6 Bcf/d salt dome natural gas storage project in Veracruz is expected to be announced soon.

Despite this, Mexico imports of natural gas from the United States continued to rise during the year, exceeding 7 Bcf/d on certain days and breaking historical records. TC Energy Corp., whose pipelines in Mexico transport about 25% of the gas consumed in the country, expects Mexico gas imports to grow by nearly 50% to 9 Bcf/d by the end of the decade. State-owned power company Comisión Federal de Electricidad (CFE) during the year announced plans to build 10 new gas-fired combined cycle power plants totaling 6 GW by 2030.

Mexico’s ruling Morena party and its allies lost their supermajority in the lower congressional house in June’s midterm elections, placing a check on President Andrés Manuel López Obrador’s nationalist energy agenda. The president’s coalition still holds simple majorities in the senate and the chamber of deputies, which is enough to pass legislation, but not enough to amend the constitution. Analysts saw the result as a win for democracy and moderation in Mexico, even as the president pledged to continue to change the energy sector to favor state firms CFE and Petóleos Mexicanos (Pemex).

Ever since coming to power at the end of 2018, López Obrador has been critical of the energy reform of his predecessor Enrique Peña Nieto. In September, despite the midterm result, he sent a bill to Congress to drastically overhaul the Mexican energy sector through a constitutional amendment. This was after his previous electricity and hydrocarbon bills were halted by the courts amid a barrage of lawsuits on antitrust and environmental grounds.

For the reform proposal to pass, López Obrador’s Morena party would need to pick up 53 votes from opposition legislators in the lower house, and at least 10 in the Senate. López Obrador has already begun pressuring members of Congress, suggesting he would call them out by name if they didn’t back his plan. Political analysts don’t think the reform is likely to pass. The vote is expected to take place in April of next year.

The most high-profile legal battle in Mexico’s upstream oil and gas segment in 2021 revolved around Houston-based Talos Energy Inc. and the  Zama shallow water oil deposit which it shares with state oil firm Pemex. In early July, Mexico’s Energy Ministry (Sener) granted Pemex operatorship of the block despite an evaluation conducted by Netherland, Sewell & Associates Inc. in 2020 that found that most of the giant discovery was within the Talos block.

In early September, Talos issued a statement saying that the decision constitutes violations of the United-States-Mexico-Canada-Agreement, aka the USMCA. Mexico analyst Duncan Wood suggested that if the case were to be resolved favorably for Talos, it might “open a floodgate” of similar cases through the mechanisms of the USMCA.

Natural gas prices more than doubled during the period between the start of the year and the fall, with major U.S. benchmark prices topping the $6/MMBtu mark regularly in October and November amid fears of inadequate supplies in Europe as well as parts of Asia. Those concerns fueled surging demand for U.S. exports of liquefied natural gas (LNG) at a time when domestic supplies started to increase but were still insufficient to meet needs.

Analysts at the American Gas Association said in November that demand for U.S. gas was up about 6 Bcf/d versus the same period last year, driven largely by export demand for LNG and pipeline gas to Mexico. The pricing situation has stabilized somewhat in December with the supply picture improving and mild weather conditions, but the European market continues to be tight and highly unpredictable.

This pricing situation and the need for LNG also gave renewed impetus during the year to LNG export projects on Mexico’s Pacific Coast.

Mexico Pacific Ltd. LLC (MPL) continues to advance its LNG export project for Puerto Libertad. MPL CEO Doug Shanda told NGI that “more than” 22 million metric tons/year (mmty) of binding offtake capacity is under negotiation for the project. Of that, 14 mmty is potentially contracted through signed memorandums of understanding.