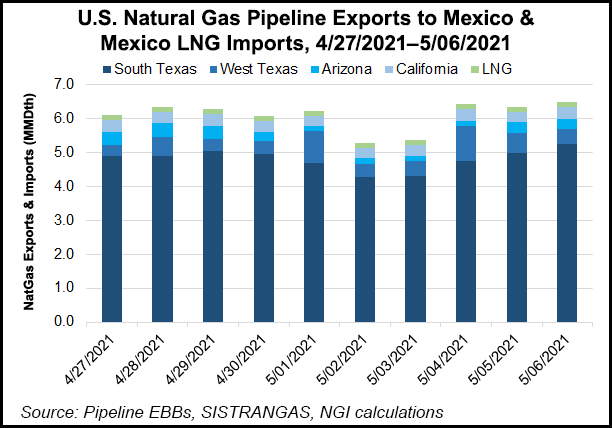 Spurred by new infrastructure and demand on the West Coast, Mexico imports via pipeline from the United States have been unseasonably strong, spiking to a record 7.1 Bcf/d in mid-April. Analysts at Energy Aspects said trade has since “tempered,” although it is still above the pre-spike baseline.

NGI calculations had Mexico imports from the United States at 6.48 Bcf on Thursday.

Deliveries to the Chihuahua II, Norte II and Naco-Nogales natural gas-fired plants are also “consistently higher than those that occurred prior to the spike,” Energy Aspects analysts said.

Another reason for the greater import needs is dropping domestic gas in the market.

State-owned Petróleos Mexicanos (Pemex) reported last Friday (April 30) that production was 3.70 Bcf/d in the first quarter, down slightly compared with 3.71 Bcf/d reported in 1Q2020. However, natural gas flaring shot to 712 MMcf/d from 472 MMcf/d in the year-ago period.

The higher rates of flaring are because of processing and other nitrogen elimination infrastructure deficiencies. As a result, only about 85% of the gas Pemex produces is making it to market.

Demand on Mexico’s Pacific could also continue to rise with the imminent startup of the New Fortress Energy import facility in Baja California Sur. The company is set to supply Comisión Federal de Electricidad power plants the equivalent of about 250,000-500,000 gallons/day (20,000-40,000 MMBtu/d) of liquefied natural gas (LNG). The LNG would be imported via a receiving and regasification terminal under construction in the port of Pichilingue.

“We’re in a great situation competitively, and the buyers that we’re talking to all know that they’re in a competitive situation now,” Shanda said. “So we’ve seen a bit more urgency at the beginning of this year.”

Meanwhile Infraestructura Energética Nova (IEnova) reported growth in volumes and revenue from its natural gas business in Mexico during the first quarter, and said it expects the trend to continue.

Also buoying gas demand is economic growth in Mexico, which the International Monetary Fund pegs at 5% for this year. This could be held back by the state of the coronavirus, however. There were 3,021 new coronavirus cases in the country on Wednesday. Although the seven-day average of new cases is dropping, only 6.6% of the population so far has been fully vaccinated, according to data from Johns Hopkins University.

Mexico gas production fed into the national pipeline system Sistrangas was 1.258 Bcf on Wednesday (May 5) compared to a week earlier (April 28) when it was 1.206 Bcf. The processing centers at Nuevo Pemex (310 MMcf), Burgos (315 MMcf) and Cactus (333 MMcf) in the southeastern part of Mexico were the leading injection points.

The five-day line-pack average on the Sistrangas was 6.788 Bcf on Wednesday (May 5) compared to 6.824 Bcf a week earlier, according to the Gadex consultancy in Mexico City.

The ideal line pack for Sistrangas is 6.86-7.29 Bcf/d to guarantee sufficient pressure in the system. Demand on the Sistrangas was 4.546 Bcf on Wednesday, compared to 4.565 Bcf a week earlier.

In maintenance news, Gasoductos de Tamaulipas is set to undergo maintenance at its Los Indios compressor station from next Tuesday (May 11) to May 17.

Natural gas prices enjoyed gains through the early part of the week and then dipped slightly on Wednesday.

In Mexico, natural gas spot prices were up in the industrial northeast, with Los Ramones up 5.6 cents at close on Wednesday to $3.393. Monterrey skipped ahead 5.5 cents to $3.307.

On the Yucatán Peninsula, the cash price at Mérida closed at $4.565 on Wednesday, up 5.7 cents. The Merida price is estimated using the price at Cactus and adding pipeline transportation costs to Mérida via the Mayakan pipeline.

Storage On Low Side

The South Central region saw a build of 20 Bcf, leading all other regions in the United States. This is the region most relevant to Mexico, which has no natural gas storage facilities.

On Tuesday (May 4) the controversial amendment to the Hydrocarbons Law became official when it was published in the Official Gazette.

The change gives the Energy Ministry sweeping powers over the granting and revocation of hydrocarbons permits, and is seen as being discriminatory to the private sector. Analysts except the amendment will be challenged in the country’s courts.