The dynamics of the nascent Mexican natural gas market are shifting once again with the 2.6 Bcf/d Sur de Texas-Tuxpan marine pipeline on the cusp of becoming the main source of supply into Mexico. 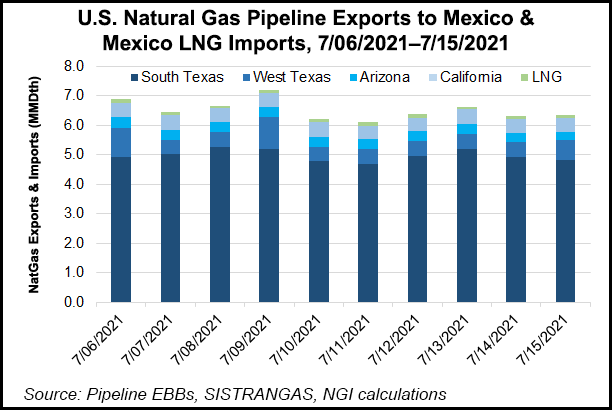 On July 13, the marine pipeline transported 1.339 Bcf into Mexico’s southeast, slightly below the 1.439 Bcf seen on the Ramones I pipeline on the same day. The Ramones system in northern Mexico has been the traditional main point of supply into Mexico.

Analysts have said that the Tula-Villa de Reyes pipeline (886 MMcf/d), due to enter service this year, will add additional demand on the marine pipeline. Meanwhile, dropping domestic injections at the Burgos processing plant are not being felt on the national Sistrangas pipeline system as cross-border volumes and U.S. injections increase.

“There is no reason to expect supply shortages this summer,” Gadex energy consultant Eduardo Prud’homme told NGI’s Mexico GPI. “What we are seeing in pipelines and flow data shows that we are in good shape. Any problems would arise from clumsy commercial management of contracts. I would say Mexico is in the best condition ever for meeting summer demand. Hopefully I am right and we are going to have a very boring remainder of the summer.”

In a recent note, BofA Merrill Lynch Global Research analysts noted that U.S. pipeline imports into Mexico, which they estimate as nearing 7 Bcf/d, are helping to support strong natural gas prices this summer.

Both liquefied natural gas (LNG) and exports to Mexico from the United States “have surpassed forecast estimates this summer, helping tighten the supply/demand balance and set the stage for a move higher,” the BofA analysts said.

In infrastructure news, New Fortress Energy Inc. on Wednesday formally began operations at its import terminal and associated 135 MW power plant in Mexico’s Baja California Sur. The small-scale terminal at the Port of Pichilingue in La Paz has a processing capacity of 1.8 million gallons/day. The state lacks connectivity to natural gas pipelines in Mexico and the United States.

Despite the increasing number of injection points, Mexico’s Sistrangas five-day line pack average was 6.773 Bcf/d on Wednesday, once again below the optimal line pack of 6.86-7.29 Bcf needed to guarantee sufficient pressure in the system.

Demand on the Sistrangas picked up on Wednesday (July 14) to reach 4.311 Bcf, compared with 4.290 Bcf a week earlier. Mexico gas production fed into the Sistrangas also rose week/week to 1.282 Bcf on Wednesday from 1.198 Bcf. The processing centers at Nuevo Pemex (323 MMcf), Burgos (287 MMcf) and Cactus (335 MMcf) were the leading injection points.

In Mexico, natural gas spot prices rose in the industrial northeast, with Los Ramones up 1.5 cents at close on Thursday to $4.200. Monterrey also rose 1.5 cents to $3.954.

On the Yucatán Peninsula, the cash price at Mérida closed at $5.239 on Thursday, up 1.2 cents.

On Thursday, the U.S. Energy Information Administration (EIA) reported a slightly higher than expected 55 Bcf injection into storage for the week ending July 7. Natural gas futures fell on the news.

Bespoke Weather Services said that even though the build was bearish relative to median expectations and the similar week in 2020, inventories were still light for this time of year.

South Central stocks rose by 4 Bcf in the latest storage figure, including a 7 Bcf injection into nonsalt facilities and a withdrawal of 3 Bcf from salts, according to EIA.