The July Nymex contract on Thursday rose for the seventh time in eight trading sessions to $3.253/MMBtu, up two-tenths of a cent day/day, as temperatures across the United States rose and demand for natural gas across many parts of the world remained strong. 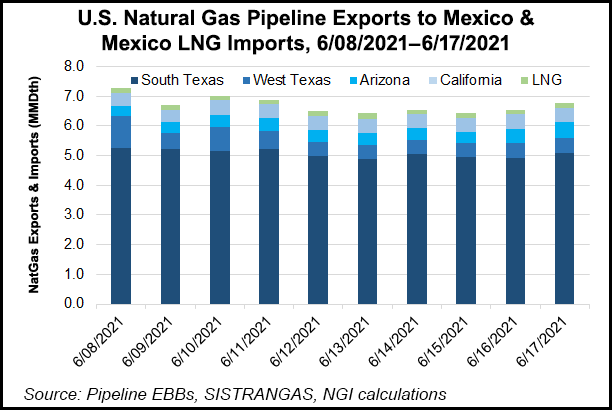 “We remain on pace to come close to record hot levels for June as a whole” in the United States in terms of national gas-weighted degree days, “with the expectation that the hotter bias of the pattern rolls on into July,” said analysts at Bespoke Weather Services.

In May, Mexico’s economy grew 24.8% year/year, according to preliminary estimates from the country’s Instituto Nacional de Estadística y Geografía (INEGI). Secondary activities, which include manufacturing, were up by 36.4% from May 2020.

The Central Bank has said the economy could grow by 6% this year after slumping 8.5% last year. It would be the first year of growth under President Andres Manuel Lopez Obrador.

Meanwhile, the public consultation of the natural gas market by pipeline operator Cenagas and signs of Comisión Federal de Electricidad (CFE) making moves to open up capacity on its pipelines are fueling optimism in the natural gas market, according to market participants consulted by NGI’s Mexico GPI.

If CFE’s pipeline space is released to competitors, “it could work to increase capacity utilization of the more than 3.0 Bcf/d of takeaway capacity from Waha to Mexico,” said NGI’s Patrick Rau, director of Strategy & Research.

NFE’s liquefied natural gas (LNG) import terminal and associated 135 MW power plant in Mexico’s Baja California Sur state is slated to come online by the end of this month. The small-scale terminal at the Port of Pichilingue in La Paz is to have a processing capacity of 1.8 million gallons/day. The state lacks connectivity to natural gas pipelines in Mexico and the United States.

In a press conference on Thursday, officials at CFE downplayed reports of looming power shortages given soaring temperatures and booming power demand.  CFE executive Mario Morales Vielmas said the country had more than 86 GW of power capacity and peak demand was estimated at 49 GW for June and July.

Mexico’s Sistrangas line pack was again on the low side this week. The five-day line pack average was 6.650 Bcf/d on Wednesday. An optimal line pack of 6.86-7.29 Bcf/d is needed to guarantee sufficient pressure in the system.

Mexico gas production fed into the Sistrangas fell week/week to 1.261 Bcf on Wednesday from 1.321 Bcf. The processing centers at Nuevo Pemex (359 MMcf), Burgos (296 MMcf) and Cactus (300 MMcf) in the southeastern part of Mexico were once again the leading injection points.

In maintenance news, the Chinameca to Los Choapas section of the Cactus-San Fernando pipeline is scheduled to undergo daily 12-hour maintenance next Tuesday and Thursday (June 22 and 24).

In Mexico, natural gas spot prices rose in the industrial northeast, with Los Ramones up 0.6 cents at close on Thursday to $3.478. Monterrey rose 1 cent to $3.393.

On the Yucatán Peninsula, the cash price at Mérida closed at $4.638 on Thursday, down 1.4 cents.

On Thursday, the U.S. Energy Information Administration reported a significantly lower than expected injection of 16 Bcf into natural gas storage for the week ended June 11. The result was skewed by a one-time adjustment in the Pacific that resulted in a steep decrease in working gas stocks in that region.

The South Central build of 12 Bcf included a 15 Bcf injection into nonsalt facilities and a withdrawal of 3 Bcf from salts. This is the region most relevant to Mexico, which has no underground gas storage facilities. However, Cenagas has said developing domestic storage was high on its priority list and is assessing where it is needed most in the ongoing Consulta Pública.