Storms and accidents have rocked Mexico’s natural gas market in recent weeks, with buyers now faced with the highest prices to date through the end of the year. 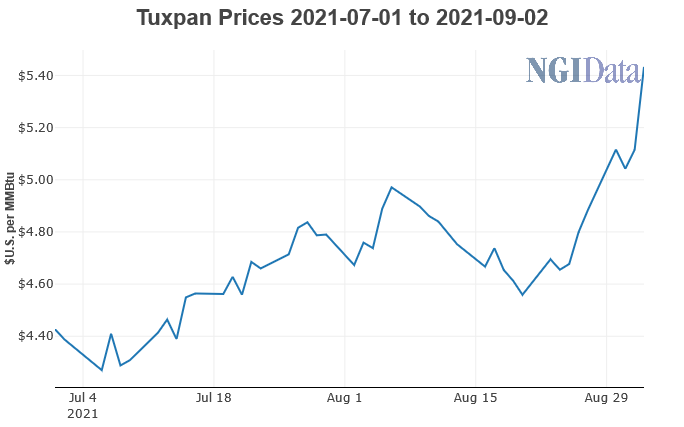 The September 2021 New York Mercantile Exchange (Nymex) gas futures contract, meanwhile, rolled off the board this week at $4.370.

Four days after the worst of Ida thrashed the state of Louisiana, the U.S. Department of Interior’s Bureau of Safety and Environmental Enforcement said based on data from offshore operators as of midday Thursday, 91.29% of the gas produced, or 2.035 Bcf/d was shut in. Around 93.55%, or 1.70 million b/d, of the oil produced also was offline.

Reports indicated it could be weeks before power is restored across the region and the GOM oil and gas industry is fully back to work.

Meanwhile Mexico’s hydrocarbons industry was also trying to get back to normal after a GOM fire in August on an offshore platform run by Petróleos Mexicanos (Pemex) knocked off a quarter of the nation’s oil production. Despite a production hit that lasted more than a week, however, the Mexican natural gas market held up relatively unscathed.

“This reinforces Wood Mackenzie’s perception that this supply component was largely resilient to the impact of the latest Pemex accident, considering both this year’s overall performance and the Mexican market’s ability to respond with offsetting imports of U.S. piped natural gas,” Falcón said.

Tudor, Pickering, Holt & Co. analysts said import flows to Mexico from the United States were up to around 7 Bcf/d last week. Through Thursday, NGI estimated that the 10-day average for U.S. imports into Mexico was 6.41 Bcf/d.

Overall, the summer came to an end with the Mexican natural gas market in good shape, despite the prospect of higher prices facing the market through the remaining months of the year.

“We had no critical alerts this summer,” Gadex consultant Eduardo Prud’homme told NGI’s Mexico GPI. He attributed the solidity of the gas market to the 2.6 Bcf/d Sur de Texas-Tuxpan pipeline, which is now the biggest importer of U.S. gas in the country.

“We can say that with the marine pipeline, we can see the benefits of having a huge injection point in the Gulf of Mexico,” he said. “It’s something we really need to appreciate as a country. It’s an example of something decided long in the past that we are seeing the benefits of today. This summer in the main areas of Mexico natural gas demand was very manageable because of the increase in flows.”

This reliability coincides with a flurry of natural gas projects being promoted by state utility Comisión Federal de Electricidad (CFE) in Mexico. These include a cross-isthmus pipeline, a liquefied natural gas (LNG) facility to serve Asian markets, and the development of commercial gas storage.

In his annual address to the nation on Wednesday, which also marked the halfway point of his presidency, President Andrés Manuel López Obrador hailed the state energy companies. He called ending privatization of the energy sector “the most important part” of his energy policy. He also said his proposed reform to the electric power sector would be sent to Congress later this month.

Mexico’s Sistrangas five-day line pack average was 6.996 Bcf/d on Wednesday, in the sweet spot of the optimal line pack of 6.86-7.29 Bcf needed to guarantee sufficient pressure in the system.

Demand on the Sistrangas on Wednesday (Sept. 1) was 4.490 Bcf, compared with 4.660 Bcf a week earlier. Mexico gas production fed into the Sistrangas rose week/week to 1.344 Bcf on Wednesday from 1.281 Bcf. The processing centers at Nuevo Pemex (363 MMcf), Burgos (297 MMcf) and Cactus (377 MMcf) were the leading injection points.

Natural gas futures on Thursday reached a 2021 high for a third straight session. The October Nymex contract advanced 2.6 cents day/day and settled at $4.641/MMBtu. The prompt month had soared 31 cents over the two previous days.

The South Central region reversed the overall U.S. trend and posted a withdrawal of 22 Bcf that included a pull of 8 Bcf from nonsalt facilities and a 15 Bcf pull from salts.