Mexico natural gas prices jumped to $3.74/MMBtu in May compared to April prices of $3.38 and year-ago prices of $2.37, according to the latest IPGN monthly index published by the Comisión Reguladora de Energía (CRE). 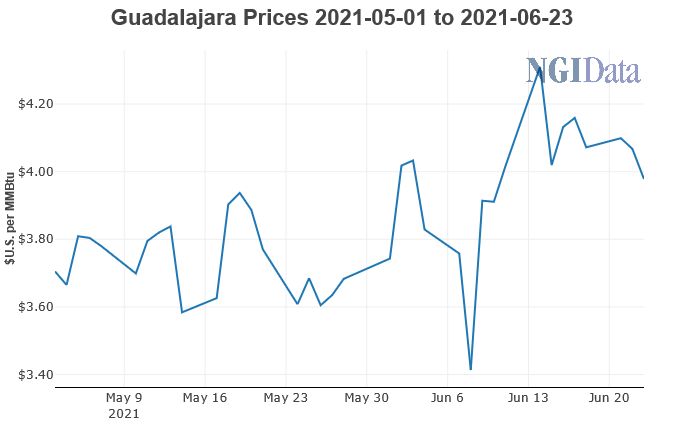 The May prices were the highest monthly prices reported in Mexico in the last 12 months, with the exception of February, when prices soared tenfold because of the freakish cold snap in Texas.

The number of deals, marketers and volumes reported in May was the highest recorded in the past 12 months.

The industrial northeast reported the highest volume of transactions at 2.297 Bcf/d, followed by the gas region encompassing Mexico City, which saw transactions of 1.930 Bcf/d, a jump of 300 MMcf/d month/month.

Imports from the United States have stayed strong, averaging above 6.5 Bcf/d so far this month.

This week, New Fortress Energy Inc. (NFE) received its first cargo of liquid natural gas (LNG) at its import terminal and associated 135 MW power plant in Mexico’s Baja California Sur. The small-scale terminal at the Port of Pichilingue in La Paz has a processing capacity of 1.8 million gallons/day. The state lacks connectivity to natural gas pipelines in Mexico and the United States.

Mexico net natural gas trade has shown continued strength as the peak cooling season proceeds, according to Energy Aspects. Heat in Baja California is still supporting high flows through Ogilby, which are trending 0.1 Bcf/d higher month/month as temperatures in Mexicali persist at between 110 and 115 degrees.

“Flows through Presidio are up by nearly the same amount, as is the case further down the pipe on an interconnect feeding TransPecos gas to Ojinaga,” Energy Aspects said. “We expect similar levels near 6.8-7.1 Bcf/d for the remainder of the peak cooling season.”

Global gas demand including from Mexico is also behind the improved price outlook from the U.S. Energy Information Administration (EIA). The EIA sees 2021 Henry Hub spot prices averaging $3.07/MMBtu this year, according to its June Short-Term Energy Outlook (STEO), an increase of $1.04 from 2020. The latest forecast for 2021 comes in slightly higher than the $3.05 average Henry Hub price forecast last month.

As a sign of a hot economy, Mexico’s Central Bank, meanwhile, announced a 25-basis point benchmark interest rate hike on Thursday, the first such move since 2018. Goldman Sachs analysts see the Mexican economy growing 6% this year, up from a previous forecast of 5%, while Barclays analysts have upped their forecast to 5.9% from 5.3%.

Mexico’s seven-day average of new coronavirus cases was 3,011 on Wednesday, according to the health ministry. About 15% of the population has been vaccinated with both doses of a coronavirus vaccine.

Mexico’s Sistrangas line pack came back to normal levels over the past week. The five-day line pack average was 6.875 Bcf/d on Wednesday. An optimal line pack of 6.86-7.29 Bcf is needed to guarantee sufficient pressure in the system.

Demand on the Sistrangas was 4.675 Bcf on Wednesday (June 23), basically flat compared with 4.691 Bcf a week earlier.

Mexico gas production fed into the Sistrangas week/week rose to 1.292 Bcf on Wednesday from 1.261 Bcf. The processing centers at Nuevo Pemex (396 MMcf), Burgos (296 MMcf) and Cactus (286 MMcf) in the southeastern part of Mexico were once again the leading injection points.

One gas buyer in Mexico City said that Waha was no longer as attractive a pricing option as it once was. Buyers who source gas from West Texas now do so more “for availability than for pricing,” he told NGI’s Mexico GPI.

In Mexico, natural gas spot prices fell in the industrial northeast, with Los Ramones down 0.8 cents at close on Thursday to $3.518. Monterrey fell 0.9 cents to $3.429.

On the Yucatán Peninsula, the cash price at Mérida closed at $4.699 on Thursday, up 0.3 cents.

On Thursday, the EIA reported a modest 55 Bcf injection into storage. The latest EIA figure came in 60 Bcf below last year’s injection and 28 Bcf below the five-year average and is seen as being indicative of a tightening natural gas market.

The South Central withdrawal of 4 Bcf included a 1 Bcf injection into nonsalt facilities and a withdrawal of 4 Bcf from salts. This is the region most relevant to Mexico, which has no underground gas storage facilities. However, Cenagas has said developing domestic storage was high on its priority list and is assessing where it is needed most in the ongoing Consulta Pública.