Imports of natural gas from the United States continue to dominate Mexico’s natural gas supply, but they have dropped slightly this month on lower demand. 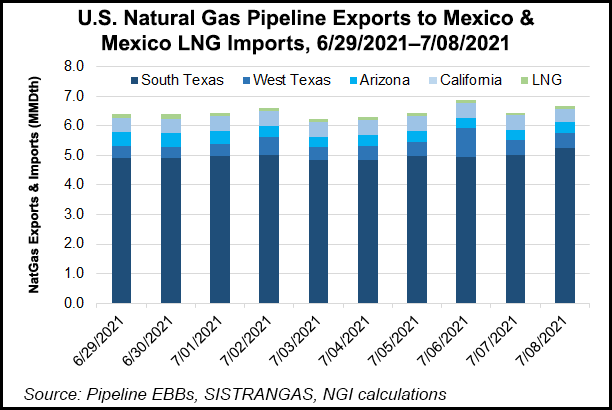 To date this month, Wood Mackenzie reported that Mexico imports from the United States were 6.7 Bcf/d, 2% lower than in June. NGI calculations had the 10-day average through Thursday at 6.48 Bcf/d.

Mexico’s meteorological service expects a stronger-than-usual hurricane season this year, with up to 19 formations potentially reaching categories 1-5 against a 1991-2020 average of 15, Falcon said. “Wood Mackenzie believes, however, that the summer’s typical upward push on power/industrial gas consumption will prevail over the storms’ downside effects, which will be temporary and rather mild on a larger scale.”

There could be market opportunities on the horizon impacting demand.

The gas would serve the western part of Mexico on pipelines that have recently started  operations. About 500 MMcf/d is sought, according to the source.

Mexico’s Sistrangas pipeline operator Cenagas is also concluding its public consultation process this Friday to determine demand in the market. This could potentially result in an open season, the source said.

Meanwhile, imports from the United States into Mexico are set to rise by an estimated 10% from 2020-2024, the International Energy Agency (IEA) said,

Gas flows via pipeline to Mexico jumped by 45% between 2016 and 2020, and climbed 15% year/year during the first half of 2021, researchers said in IEA’s latest quarterly gas market report. This happened despite a temporary decline in February because of Winter Storm Uri.

IEA researchers noted that commissioning new pipelines on both sides of the border has eased access to the Mexican market for Permian Basin producers. They cited recent capacity additions such as the 472 MMcf/d Samalayuca-Sásabe pipeline and the 2.1 Bcf/d Permian Highway Pipeline as well as the pending Tula-Villa de Reyes pipeline (886 MMcf/d), due to enter service this year.

Gas demand in Mexico is expected to grow by 1.3% annually through 2024, “as growth in gas-fired generation slows and increases in industry-related uses are partially offset by declining needs from the energy sector on lower domestic production.” Declining domestic production, however, could mean the higher need for imports.

Mexico’s Sistrangas five-day line pack average was 6.765 Bcf/d on Wednesday, below the optimal line pack of 6.86-7.29 Bcf needed to guarantee sufficient pressure in the system. Demand on the Sistrangas was down significantly on Wednesday (July 7) to 4.290 Bcf, compared with 4.600 Bcf a week earlier.

Mexico gas production fed into the Sistrangas also fell week/week to 1.198 Bcf on Wednesday from 1.354 Bcf. The processing centers at Nuevo Pemex (319 MMcf), Burgos (293 MMcf) and Cactus (242 MMcf) in the southeastern part of Mexico all showed weekly declines but were still the leading injection points.

In Mexico, natural gas spot prices rose in the industrial northeast, with Los Ramones up 2.1 cents at close on Thursday to $3.795. Monterrey also rose 2.1 cents to $3.702.

Tuxpan in Veracruz saw the spot price up 2.0 cents on Thursday to $4.308. In the West, the Guadalajara price was flat day/day at $4.561. Farther north in El Encino, prices were $4.127, unchanged from the previous day.

On the Yucatán Peninsula, the cash price at Mérida closed at $4.978 on Thursday, up 1.9 cents.

On Thursday, EIA also surprised the market by reporting a smaller than expected 16 Bcf injection into storage for the week ending July 2. Natural gas futures jumped on the news.

Also surprising was the fact that South Central stocks fell by 14 Bcf in the latest storage figure. Lower gas production in Texas and lower wind generation were behind the draw, analysts said on the The Desk’s online energy chat Enelyst. Texas is the principal supplier of natural gas to Mexico.