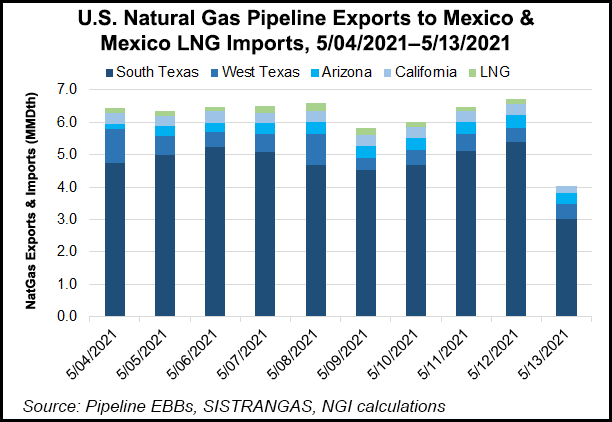 The higher prices, based on strong liquified natural gas (LNG) demand and rising U.S. consumption, will translate to higher prices for Mexico, which is importing in excess of 6 Bcf/d on cross-border pipelines from the United States.

“In 2022, we expect the Henry Hub price will fall to an average $3.02 amid slowing growth in LNG exports and rising production,” EIA researchers said.

So far this month, Mexican dry gas output has averaged slightly more than 2.4 Bcf/d, according to Wood Mackenzie estimates. “This volume exceeds the average of the preceding two months by about 12%. Due to several operating and nontechnical risks, domestic dry gas processing and production saw record lows between February and March this year. If continued, this trend could induce some offsetting effect on U.S. piped gas exports to Mexico.”

Wood Mackenzie said imports from the United States are averaging 6.2 Bcf/d so far in May, based on preliminary estimates.

NGI estimates put the Wednesday import figure, including LNG at the Altamira terminal, at 6.73 Bcf.

In an apparent sign that the government wants to ramp up the domestic production of gas, Petróleos Mexicanos (Pemex) CEO Octavio Romero said during a press conference on Wednesday that the company is looking to develop the Lakach deepwater gas field in the Gulf of Mexico.

Lakach contains proved and probable resources, i.e. 2P reserves, of close to 1 Tcf. It was discovered in 2008 and saw development halted for budgetary reasons ahead of the 2013-2014 energy reform.

Mexico gas demand is also bolstered by the improving economic situation. The Mexican economy grew 0.4% in the first quarter.

After contracting for two years, Mexico’s economy should grow by 4.5% this year, according to the latest Central Bank survey of economists. New coronavirus cases in Mexico on Wednesday were 3,009, down slightly compared to last Wednesday, with 7.44% of the population now vaccinated with both doses, according to data provided by Johns Hopkins University.

Reflecting the higher domestic output, Mexico gas production fed into the national pipeline system Sistrangas rose to 1.390 Bcf on Wednesday compared to 1.258 Bcf a week earlier (May 5). The processing centers at Nuevo Pemex (371 MMcf), Burgos (310 MMcf) and Cactus (401 MMcf) in the southeastern part of Mexico were the leading injection points.

The five-day line-pack average on the Sistrangas was 6.910 Bcf on Wednesday (May 12) compared to 6.788 Bcf a week earlier, according to the Gadex consultancy in Mexico City.

The ideal line pack for Sistrangas is 6.86-7.29 Bcf/d to guarantee sufficient pressure in the system. Demand on the Sistrangas also rose substantially week/week and was 4.832 Bcf on Wednesday (May 12), compared to 4.546 Bcf a week earlier.

In Mexico, natural gas spot prices fell in the industrial northeast, with Los Ramones down 4.6 cents at close on Thursday to $3.185. Monterrey shed 4.6 cents to $3.100.

On the Yucatán Peninsula, the cash price at Mérida closed at $4.366 on Thursday, down 4.4 cents. The Merida price is estimated using the price at Cactus and adding pipeline transportation costs to Mérida via the Mayakan pipeline.

On Thursday, the U.S. Energy Information Administration (EIA) reported a 71 Bcf injection into storage inventories for the week ending May 7, basically in line with expectations.

The South Central region saw a build of 21 Bcf, leading all other regions in the United States. This is the region most relevant to Mexico, which has no natural gas storage facilities.

Last  Friday (May 7), a federal judge granted a provisional suspension of the amendment to the Hydrocarbons Law, pending an underlying lawsuit against it filed by five companies that hold permits in a regulated segment of the hydrocarbons sector.

The amendment gives the Energy Ministry sweeping powers over the granting and revocation of hydrocarbons permits, and is seen as being discriminatory to the private sector.

Next week representatives from Mexican business group Confederación de Cámaras Nacionales de Comercio, Servicios y Turismo (Concanaco) are set to meet with government officials to discuss energy sector matters. Some of the discussion will include natural gas supply issues, what was learned from the Texas freeze, and potentially opening up capacity for independent players on Comisión Federal de Electricidad (CFE) pipelines.

“The government seems open to dialogue, which is a good sign,” a gas market participant told NGI’s Mexico GPI.

All eyes now shift to the June 6 midterm elections, which could have important ramifications for the energy sector. With about three weeks to go before the vote, there was still no clear sign of any major electoral change in the country.