This week was yet another reminder of the interconnectedness of energy markets as soaring temperatures in disparate parts of the Pacific Northwest in the United States and tight market conditions drove natural gas prices for Mexican end-users higher. 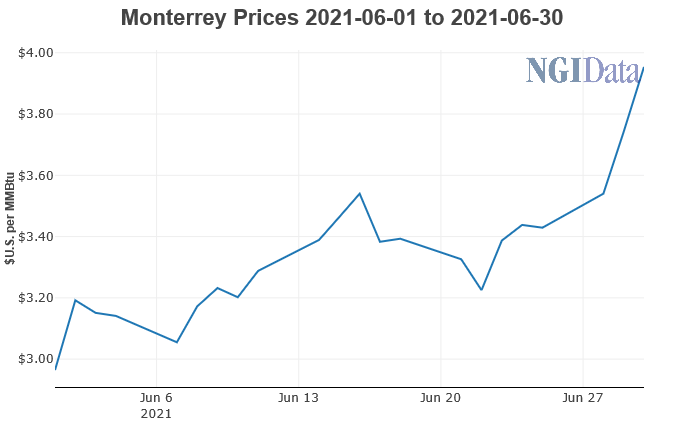 Nymex futures rose for eight straight trading days through Thursday, with the August futures contract settling 1.1 cents higher day/day at $3.661 and September edging up eight-tenths of a cent to $3.632.

With summer in full swing in Mexico, imports from the United States remain strong and were 6.44 Bcf on Thursday, according to NGI calculations. The 10-day average through Thursday was 6.52 Bcf/d.

Mexico production is also on the up as state oil company Petróleos Mexicanos (Pemex) said it is increasing investment amid higher commodities prices.

Natural gas production in Mexico totaled 3.84 Bcf/d in May, up from 3.61 Bcf/d in May 2020, according to the latest data from upstream regulator Comisión Nacional de Hidrocarburos (CNH). Pemex supplied 3.63 Bcf/d of the total, up from 3.37 Bcf/d in the year-ago month and 3.53 Bcf/d in April.

Pemex said it plans to double capital expenditures (capex) this year in comparison with last year to 225 billion pesos, or about $11.3 billion. In 2022, capex is forecast to be 324 billion pesos ($16.3 billion).

One important gas project gaining steam is the 320 MMcf/d Jaltipán-Salina Cruz natural gas pipeline that would cross the Mexican isthmus and expand supply from coast to coast.

Comisión Federal de Electricidad (CFE) would spearhead the project, according to a gas market participant who spoke to NGI’s Mexico GPI. The new pipeline would supply refinery and petrochemical plants. It also may fuel a liquefied natural gas (LNG) export facility proposed for Salina Cruz by the current administration. The pipeline project requires capex of $434.8 million and on paper is slated to enter service next year.

Meanwhile, Sempra CEO Jeffrey Martin this week said the top infrastructure priority is the first phase of its Energía Costa Azul LNG project on Mexico’s western coastline. The project was sanctioned last year and remains on time and on budget, he said.

“We’ve got about a $2.4 billion capital program to support that project, which we hope to turn into operation by the end of 2024,” he said.

Mexico’s Sistrangas five-day line pack average was 6.866 Bcf/d on Wednesday. An optimal line pack of 6.86-7.29 Bcf is needed to guarantee sufficient pressure in the system. Demand on the Sistrangas was 4.600 Bcf on Wednesday (June 30), basically flat compared with 4.675 Bcf a week earlier.

Mexico gas production fed into the Sistrangas week/week reflected higher production and rose to 1.354 Bcf on Wednesday from 1.292 Bcf. The processing centers at Nuevo Pemex (419 MMcf), Burgos (294 MMcf) and Cactus (314 MMcf) in the southeastern part of Mexico were once again the leading injection points.

System operator Cenagas said Tennessee Gas Pipeline is “contemplating” carrying out maintenance work between EC 1 Freshwater and EC 409 Edinburgh. The pipeline delivers gas into Mexico from South Texas through the V033 injection point. Maintenance would begin on July 14, with potential for “pressure and flow impacts.”

In Mexico, natural gas spot prices fell in the industrial northeast, with Los Ramones down 3.7 cents at close on Thursday to $3.876. Monterrey fell 3.6 cents to $3.782.

On the Yucatán Peninsula, the cash price at Mérida closed at $5.058 on Thursday, down 4.5 cents.

On Thursday, the U.S. Energy Information Administration surprised the market by reporting a larger than expected 76 Bcf injection into storage for the week ending June 25. Bespoke Weather Services said the boost was “much looser, balance wise,” than last week’s 55 Bcf build. However, it is “still a little tighter than the five-year average supply/demand balance.”

After falling last week, South Central stocks rose by 14 Bcf in the latest storage figure. This included a 12 Bcf injection into nonsalt facilities, the region most relevant to Mexico, which has no underground gas storage capacity. However, Cenagas has said developing domestic storage was high on its priority list and is assessing where it is needed most in the ongoing Consulta Pública.