Mexico natural gas prices dropped to $3.37/MMBtu in April, the lowest average monthly price so far this year, according to the latest IPGN monthly index published by the Comisión Reguladora de Energía (CRE). 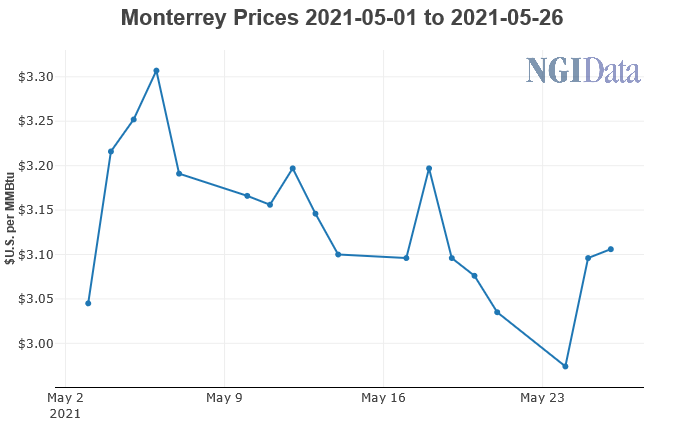 The prices, however, were more than $1 higher compared with April 2020, when the CRE reported prices of $2.13/MMBtu.

The CRE used 277 transactions from information provided by 28 marketers to calculate the April index. The industrial northeast reported the highest volume of transactions at 2.201 Bcf/d, followed by the gas region encompassing Mexico City which saw transactions of 1.682 Bcf/d.

According to data from upstream regulator Comisión Nacional de Hidrocarburos (CNH), Mexico’s natural gas production averaged 3.74 Bcf/d in April, down from 3.93 Bcf/d in the same month a year ago. State oil firm Petróleos Mexicanos (Pemex) supplied 3.53 Bcf/d of the total, down from 3.71 Bcf/d in April 2020.

Given stagnating local production and growing imports, a major gas buyer in Mexico City told NGI’s Mexico GPI that “today the Mexican natural gas market acts like an extension of the American market.”

The Mexican economy, meanwhile, continues to heat up. Goldman Sachs analysts see the economy growing 6% this year, up from a previous forecast of 5%, while Barclays analysts have upped their forecast to 5.9% from 5.3%.

The outlook for the pandemic has also improved. Mexico’s Health Ministry said there were 50 coronavirus-related deaths on Sunday (May 23), the lowest daily figure in more than a year.

The five-day line pack average on Mexico’s natural gas pipeline system Sistrangas fell to 6.599 Bcf/d on Wednesday, below the optimal line pack of 6.86-7.29 Bcf/d needed to guarantee sufficient pressure in the system. The system is “under close observation,” according to the Gadex consultancy in Mexico City.

Users that do not stick to their injection and reception obligations face the risk of penalties, Gadex said.

Mexico gas production fed into the Sistrangas fell to 1.357 Bcf on Wednesday compared with 1.206 Bcf a week earlier (May 19). The processing centers at Nuevo Pemex (461 MMcf), Burgos (300 MMcf) and Cactus (287 MMcf) in the southeastern part of Mexico were the leading injection points.

In related news, a market source told NGI’s Mexico GPI that Sistrangas operator Cenagas is looking to open up capacity on routes originating in Zapotlanejo and Montegrande.

A Mexico gas buyer told NGI’s Mexico GPI his team foresees higher prices this summer and “a bit of a roller coaster” for prices in the next few months.

The July Nymex contract, in its debut as the front month, dropped 6.9 cents day/day and settled at $2.958/MMBtu. It had closed above $3.00 on Wednesday.

In Mexico, natural gas spot prices fell in the industrial northeast, with Los Ramones down 8.8 cents at close on Thursday to $3.094. Monterrey shed 8.6 cents to $3.010.

On the Yucatán Peninsula, the cash price at Mérida closed at $4.281 on Thursday, down 9.2 cents.

On Thursday, the U.S. Energy Information Administration (EIA) reported another high-side build to underground storage. For the week ending May 21, 115 Bcf of natural gas was injected into storage.

The South Central build of 43 Bcf led all regions and included a 27 Bcf injection into nonsalt facilities and an increase of 16 Bcf into salts. This is the region most relevant to Mexico, which has no underground gas storage facilities.