Despite concerns about the energy policies of Mexico’s current government, there is plenty of reason to be optimistic about the country’s nascent natural gas market, according to NGI’s Christopher Lenton, senior editor for Mexico and Latin America. 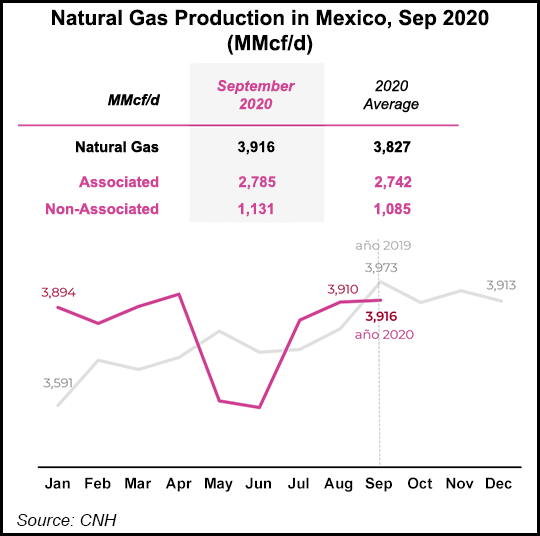 Lenton spoke last week at the LDC Natural Gas Forum 2020 about his reasons for optimism, which include newly completed and planned infrastructure, rising gas imports from the United States and increasingly savvy industrial consumers in the Mexican market.

He noted that pipeline gas flows from the United States to Mexico are at an all-time high despite the severe economic impacts of the coronavirus. Mexico’s economy, which was forecast to contract this year even before the pandemic, is now expected to shrink by an estimated 10% this year.

Lenton said the resiliency of Mexico’s gas imports in the face of these factors shows the molecule’s importance for Mexico’s economy and the government of President Andrés Manuel López Obrador, commonly known as AMLO.

“AMLO himself has talked about Texas gas being the cheapest in the world,” Lenton said. Elvira Daniel, the general director of Mexico’s Centro Nacional de Control del Gas Natural (Cenagas), has made similar comments.

Cenagas is a state entity that operates the Sistrangas natural gas pipeline grid.

Although about 25 natural gas marketers are active in the Mexican market, CFE dominates the importation and marketing of natural gas in Mexico through subsidiaries CFE Internacional and CFEnergía.

Although Mexico’s domestic natural gas production has stabilized somewhat under López Obrador, it will be difficult for the country to grow the current production of 3.8 Bcf/d to the government’s goal of 5 Bcf/d by the end of the president’s term in 2024, Lenton said. This means Mexico will likely rely on U.S. gas for the foreseeable future.

Sempra Energy announced this week it has reached a final investment decision (FID) for the Energía Costa Azul (ECA) liquefaction project in Baja California state. ECA, the first LNG export project in the world to reach FID in 2020, will require investment of $2 billion for the first phase, with production expected to start in late 2024.

The project would allow LNG sourced from the United States to bypass the Panama Canal and reach Pacific demand centers, namely in Asia.

In addition to these projects, Lenton highlighted an open season announced last month by Engie SA to gauge shipper support for the firm’s Mayakan pipeline system in southeastern Mexico.

Although CFE and Pemex will undoubtedly remain the dominant players in Mexico’s natural gas market, the market is underpinned by strong growth fundamentals and should become more transparent and liquid over the coming years, he said, paving the way for third-party indexes to eventually form.