Mexico’s demand for natural gas has not been impacted by the ongoing price surge, according to buyers and sellers of the fuel who spoke at the recent Mexico Gas Summit in San Antonio, TX. 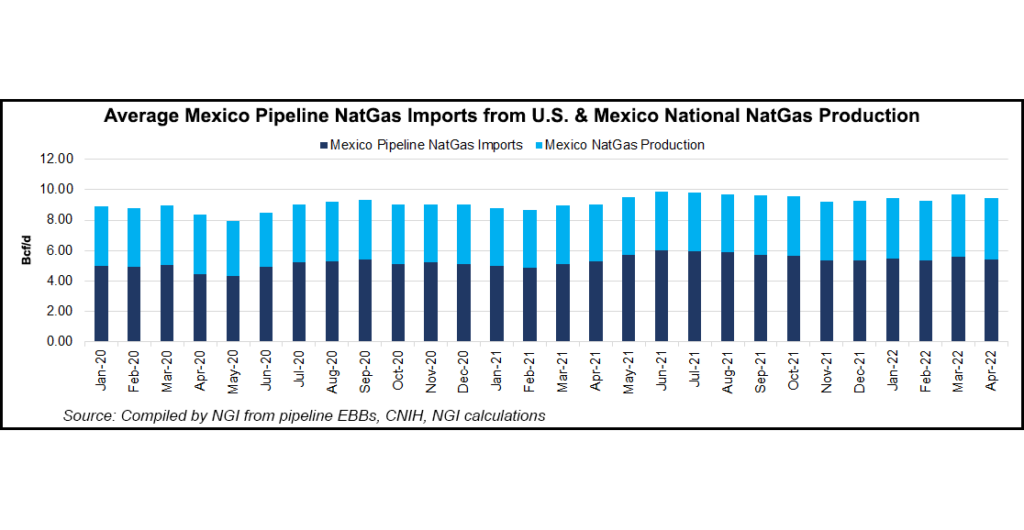 “Demand is very inelastic,” said Santa Fe Gas LLC CEO Santiago Garcia during the event organized by Industry Exchange LLC. “The best alternative right now is to continue burning gas. We have not seen any demand destruction, and we are not expecting demand destruction.”

He said demand is actually growing on Fermaca’s Wahalajara gas pipeline system, which runs from Waha, TX, to the industrial zone of Guadalajara in central Mexico. Santa Fe markets the gas on the system and projects demand growth for the next three to five years.

Tenaska Marketing Ventures’ Geoffrey Street said “you don’t really see any decrease in volumes. You see some gas migrating from south to west Texas but year-on-year we are pretty even.” Tenaska sells natural gas at the U.S.-Mexico border to Mexican clients.

Imports of natural gas into Mexico from the United States via pipeline were 5.315 Bcf on Tuesday, according to NGI calculations. Piped gas imports have been in the 5.5-6 Bcf/d range over the past month and have trended upward over the past two years.

Invenergy LLC’s Ignacio Castro Foulkes, director of commercial transactions, said Mexico gas demand “is inelastic, and there is no way to substitute” for natural gas. He said that 60% of Mexico’s power comes from gas and “not much would change that in the short term.” He said per MMBtu, “gas is still competitive” and “demand is still growing.”

The company developed and operates a 768 MW gas-fired power plant in Monterrey, Mexico. He said the needs of the power plant are hurt more by operational limitations than pricing.

“We have very few tools” in the Mexico market to optimize gas supply, Foulkes said. “The lack of storage is just increasing our cost structure,” he said. He called the development of natural gas storage in Mexico “mandatory.”

There was talk at the event of now being the time to increase domestic production. With the Dos Bocas refinery being built, along with potentially six combined-cycle power plants and liquefied natural gas (LNG) export projects, demand is only set to rise.

“We are seeing more and more domestic production hitting the local market,” Santa Fe’s Garcia said. But, “Mexico will continue to depend on imports.”

Comisión Nacional de Hidrocarburos (CNH) Commissioner Hector Moreira said “natural gas is becoming more important” in Mexico and “it might be the most important fuel input at a national level.”

He said there are 476 areas for exploration and development that haven’t been assigned in the country, and 224 Tcf of prospective resources, equivalent to 100 years of natural gas.

“We are starting to see the first uptick in gas and are in a period of growth with higher investment,” he said. He also said that given the high price environment, state oil company Petróleos Mexicanos “has the opportunity to be a solvent company.”

But the challenge is, “how do we produce more? We have reserves, but we need to produce more.”

He warned that the high pricing environment could produce “a social disturbance” in Mexico, widening economic divides. More domestic production is needed, he said.

Levy added that Mexico needed “to get out of the idea that natural gas needs to be connected to pipelines.” His company has developed micro LNG capability and virtual pipelines from the wellhead to market.

The COO of E&P Verdad Exploration LLC Carlos Machado said “if you think about the Rio Grande basin, it is basically a mirror image of the Burgos.” He said his company would participate in oil and gas auctions in northern Mexico if they were to be restarted.

But, he added, the lack of natural gas infrastructure and logistics on the Mexican side meant higher costs, “especially coming from the luxury of Louisiana and Texas.” 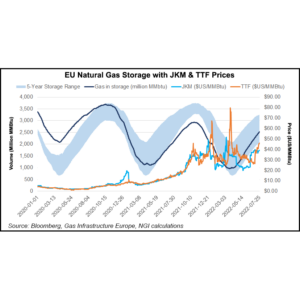