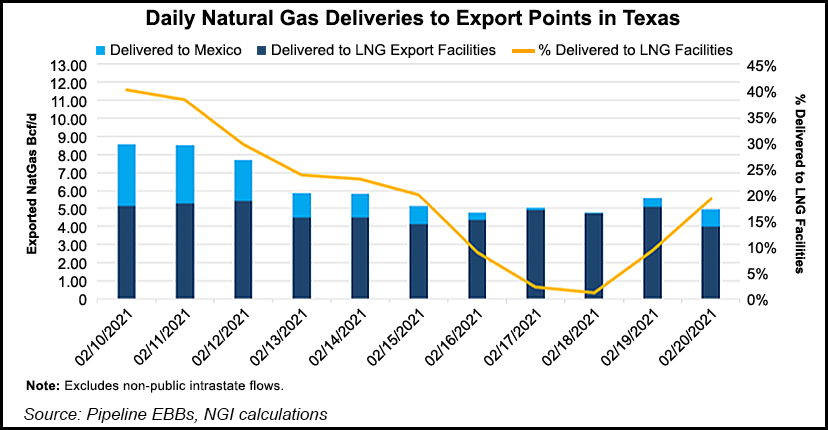 Amid a historically tight global gas market, Mexico is more dependent than ever on pipeline imports from the United States, said NGI’s Christopher Lenton, senior editor for Mexico and Latin America, who keynoted day one of the conference.

The cold snap in February, which caused a 20% plunge in natural gas production in the south-central United States as power demand surged, showed the risks of Mexico’s dependence on U.S. gas supplies.

Mexican gas buyers “always bring it up when I speak to them,” Lenton said. “They were slammed by it completely unprepared, and there are still consequences from that event.”

Pipeline natural gas deliveries from Texas to Mexico fell by more than 1 Bcf/d to slightly above 4 Bcf/d at the peak of the cold weather event, according to NGI calculations based on pipeline electronic bulletin boards.

Prices at the Waha and Houston Ship Channel hubs, both of which are closely linked to gas prices in Mexico, hit $206/MMBtu and $400/MMBtu, respectively, at the height of Uri. As a result, “we did see some market players unable, or unwilling, to pay their bills and it was a very difficult time,” Lenton said.

“The one thing I hear when I talk to Mexican buyers of natural gas is that they’re very, very nervous going into this winter,” he said. “A lot of that has to do with prices, but there’s also an element that has to do with the winter storm last year.”

Mexico’s vulnerability to disruptions in gas supply “clearly is a top-of-mind issue for many customers because many of them were exposed to shutdowns due to lack of physical availability,” said Igasamex’s Carlos Arriola, director general, during a panel at the forum. The firm develops and operates natural gas systems in Mexico.

“In some cases they were exposed to tremendously high natural gas prices during that week, and those two issues are what keep us awake at night and keep our customers awake at night.”

In preparation for the upcoming winter, some gas buyers are looking at hedging instruments, while others are opting to purchase gas on a monthly basis, rather than in the spot market, Lenton said. Citing NGI’s most recent survey of Mexico’s natural gas market conducted in April, Lenton said there was a sizable year/year bump in the number of buyers purchasing gas in the month-ahead market.

He highlighted that Mexico is the world’s sixth largest importer of natural gas behind Italy and the eighth-largest natural gas market in the world, larger than Germany and the UK.

Adding to the challenge, Lenton said, is a lack of natural gas storage capacity in Mexico, as well as the lack of a robust secondary market to optimize unused pipeline transport capacity.

Where Are Mexico’s Gas Supply Challenges?

Although Mexico’s gas market challenges vary by region, a common thread is concern about “gas availability, primarily related to the situation that we had back in February,” said Arriola. Abbott’s executive order on gas exports “brought into the front how politically sensitive these types of issues can be, and how vulnerable to a great extent our current gas supply chain is due to lack of local production and to lack of storage.”

Luxem Energía’s Norberto Catalan, managing director of the energy trading firm, said during the same panel that part of the problem is that Cenagas “doesn’t allow us, as a market participant, to help them” through a secondary market for unused firm transport capacity.

Mexico’s previous government laid the groundwork for a secondary capacity market, and for the development of underground gas storage capacity.

As a result, she said, the main objective of Cenagas has become ensuring gas supply for CFE.

Nonetheless, there is plenty to be optimistic about in Mexico’s gas market, said Arriola. He highlighted that a few years ago, gas buyers in Mexico could purchase natural gas only from Pemex. Today gas can be sourced from numerous marketers. U.S.-to-Mexico pipelines such as the Sur de Texas-Tuxpan offshore pipeline and the Wahalajara system also have improved optionality and energy security, he said.