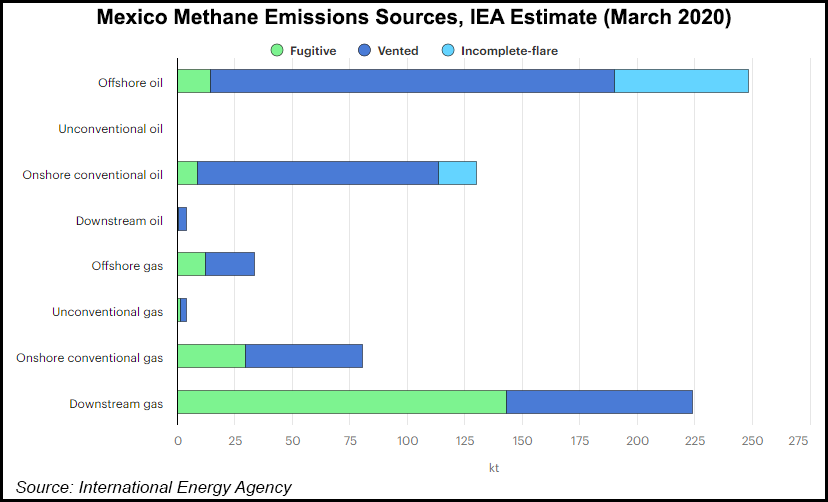 Mexico will struggle to meet its targeted reduction in methane emissions from oil and gas operations if existing regulations are not improved, according to new analysis by Talanza Energy Consulting.

The regulations were hailed by the Environmental Defense Fund (EDF) as putting Mexico “on a clear pathway to meet a trilateral commitment between the U.S., Canada and Mexico to reduce emissions by 45% by 2025.”

However, “the particularities of the Mexican regulation imply a high risk in implementation and fulfillment for the government and regulated companies, respectively,” said Talanza CEO Marco Cota and legal services partner María Serna in a research note.

They said that while companies in the United States and Canada must follow commonly accepted leak detection and repair (LDAR) practices, “ASEA’s guidelines are less transparent as they regulate on a case-by-case basis, with three additional requirements.”

The extra requirements comprise the measurement of total emissions in a base year, documented in a methane emissions baseline, or MEBL; a six-year planning document for preventing and controlling methane emissions, known by its Spanish initials PPIEM; and a favorable technical opinion of the MEBL and PPCIEM from a qualified third-party emissions expert.

“These three additional requirements impose a heavy bureaucratic burden with no apparent benefit,” Cota and Serna said, explaining that if the LDAR is well regulated, implemented and reported, it will fulfill the purpose of the MEBL and PPCIEM on its own.

“Additionally, the implementation of both [the] PPCIEM and MEBL requires a robust capacity of third parties,” they continued, noting that there are currently no third parties in Mexico authorized to sign off on firms’ methane emission reduction plans.

This is due in part to ASEA’s failure to publish a call for an authorized third-party registry in time, Cota and Serna said, but also to the difficulty of meeting the official requirements to become an authorized expert.

As a result, ASEA in December granted a 19-month window for companies to submit the PPCIEM and MEBL, which firms now must submit by June 7, 2021.

However, there is still “a high risk” of not having enough third-party capacity in place by June 2021, Cota and Serna said.

Talanza is recommending that ASEA improve the methane regulations by focusing them on the LDAR mechanism instead of PPCIEM and MEBL.

“Methane emissions regulation is a recent global practice with an extremely urgent need for implementation,” Cota and Serna said, adding, “Our lack of implementation is terrible news, [especially] if the reason behind it is just the auto-imposed regulatory burden.”

The Talanza assessment comes amid published reports that U.S. President Donald Trump’s administration is planning to roll back federal regulations on oil and gas methane emissions implemented under his predecessor, Barack Obama.

States such as New Mexico and Colorado, meanwhile, have recently taken steps to strengthen controls on methane emissions from the sector.

U.S.-produced natural gas, already a major component of Mexico’s energy mix, is expected to play an ever-growing role in Mexico as new pipeline infrastructure comes online, allowing the molecule to supplant dirtier energy sources such as fuel oil and coal.