More than two decades ago, the U.S. natural gas pipeline industry was restructured to provide open access to shippers. Anyone who missed it might want to head down to Mexico to witness something of a reprise — and perhaps make a few pesos, too. 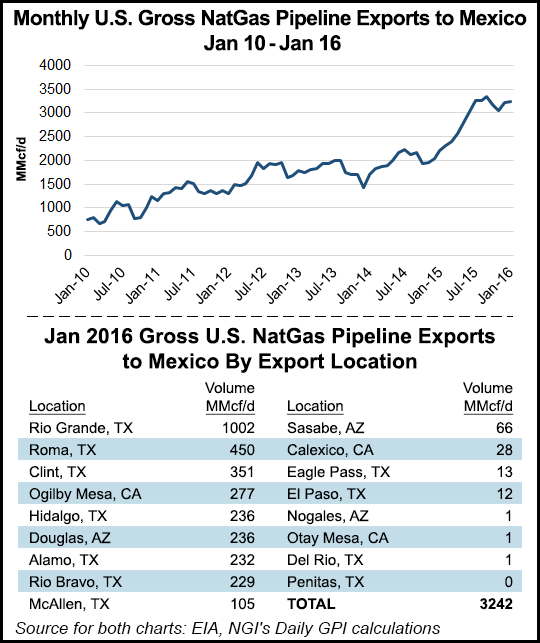 Mexico’s existing gas pipelines have been removed from vertical integration with national oil company Petroleos Mexicanos (Pemex). And the country’s Comision Federal Electricidad (CFE), has been engaged in a robust buildout of the gas grid, awarding contracts for several projects to date. These pipelines are to feed new gas-fired power generating plants and those converted from fuel oil.

Excess capacity not needed in the CFE pipelines to fuel power generation will be marketed on an open-access basis. Meanwhile, the former Pemex gas pipelines are under the authority of the recently created and state-owned Cenagas, which is to function as an objective system operator that is not committed to any particular interests, such as those of Pemex.

When the new pipe is in the ground, filled with gas from South Texas bound for power plants and industrial end-users, it and the gas market eventually should look something like what exists in the United States, observers say.

“This is all very new to Mexico, just like it was new in the United States 25 years ago, and so I would not expect the process to be smooth. I would expect it to be bumpy and lumpy, just like it was here in the U.S….” consultant and midstream developer John Hopper told NGI. Hopper has been visiting Mexico with midstream projects in mind, but it’s too soon to talk about them, he said.

The interim “bumpy and lumpy” period when regulators, developers and market-makers are still figuring things out is the time to get in and make money, Hopper said. When the dust settles and volatility dies down — after several years, most likely — Mexico’s gas market will be less exciting. And that’s what Cenagas is hoping comes to pass.

“Even though we have very old pipelines, as an entity we are very young,” Eduardo Prud’homme, Cenagas head of technical system operations, said at the recent 2nd Mexico Gas Summit in San Antonio.

While the old Pemex pipelines are in the hands of Cenagas now, those hands don’t have all the experience they’re going to need. The assets are currently being managed by Pemex veterans, Prud’homme said. However, they are working for Cenagas, not Pemex.

“That’s the message that I want you to have today,” he said. The relationship between Cenagas and Pemex is a contractual one. “We want to get rid of those contracts as soon as we develop the abilities and the capabilities in our staff to be by ourselves…We are going to be like a conductor in an orchestra. We are going to decide which is the better way to supply gas…”

For interested observer Hopper, there are still questions about how the developing pipeline grid — spearheaded by CFE — will be integrated with the legacy assets under Cenagas. At least during the initial stages of development, and perhaps longer, the new pipelines and their capacity will be under the jurisdiction of CFE, not Cenagas.

“To me, that doesn’t make a lot of sense,” Hopper said. “They ought to be integrating the whole grid down there, operating it as one. It would be much more efficient to do it that way.”

There are other aspects of Mexico’s natural gas market that are not yet clear, according to Wood Mackenzie Ltd.’s Greg Hopper, head of Americas gas and power consulting.

“You have the makings of a system, but what you don’t have is a set of rules in Mexico that will clarify how that will trade,” he said at the FT Energy Infrastructure Forum in Houston. “You still don’t have the producer community necessarily ready to supply both Mexico and Texas…

“For people in our business, we draw from the U.S. experience of trading in Canada to see how different regimes regulated their various intrastate, interstate and midstream systems, and I think the rules are still being clarified in Mexico that will ultimately determine how much prices converge.”

Wood Mackenzie sees about 6 Bcf/d of power generation demand for gas and another 1 Bcf/d of industrial demand growth between now and 2025, Hopper said. That would take the market from 3-4 Bcf/d to 9 Bcf/d or more, he said.

What Mexico stands to ultimately gain is ready access to abundant and low-cost U.S. gas. Much of the nation’s pipeline system will be new with low losses to leaks, and the power sector will have new plants with low heat rates, the Wood Mackenzie consultant said. “At the very least you’ll bring both gas prices and retail power prices back toward U.S. standards,” he said, adding that it remains to be seen how much traders ultimately arbitrage the price difference out of the two markets.

“The market will figure it out,” developer Hopper said. “It will all eventually work the way it’s supposed to…They have, at least, the model of what happened in the United States as a go-by.”

He said he understands that CFE is setting up its own gas marketing operation. “Good for them. That makes sense that they would do that.” Private equity-backed groups also have been getting into Mexico. “I think to some extent some are already playing in those markets down there. It’s an opportunity for people to play in that market just like it was here 25 years ago,” he said.

“You can make some pretty good money. When it gets all smooth and there’s no volatility, then there’s not as much opportunity to do that. It’s just like here. It’s more difficult to make money buying and selling gas than it used to be. You have to be more creative. That will happen down there, too.”