As Mexico’s natural gas market continues to evolve, next year will see the beginning of transaction data reporting to the government. Eventually, trading hubs are expected to emerge, and a financial market should come into being to complement physical trading, according to the head of the regulatory unit of Mexico’s Comision Reguladora de Energia (CRE). 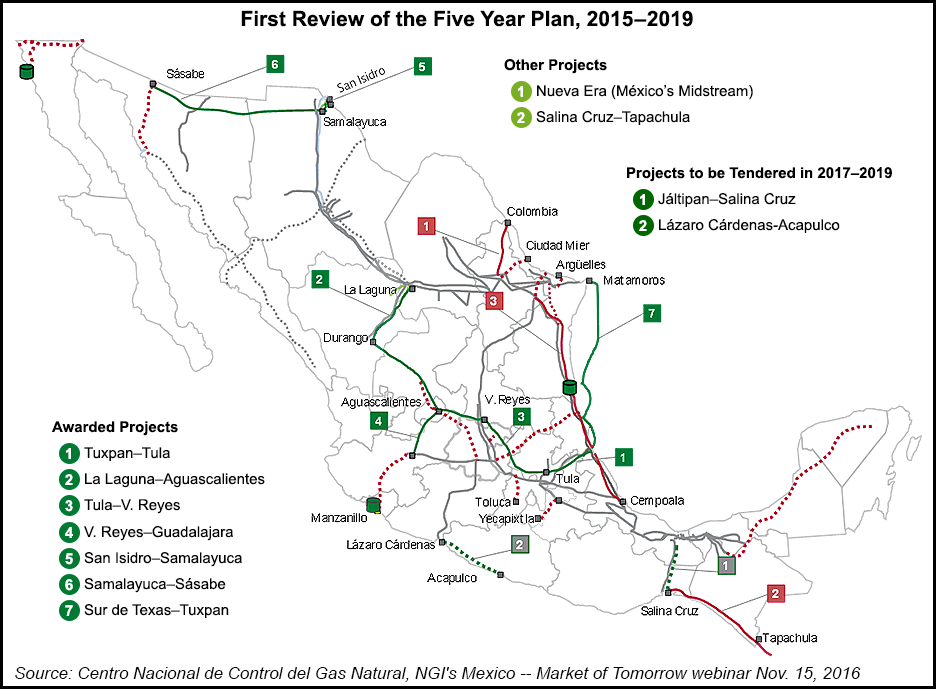 Beginning next year there will be an obligation for companies trading gas in Mexico to report transaction data every day to the CRE, Meney De La Peza, head of CRE’s regulatory unit, said during NGI‘s webinar Tuesday: Mexico Natural Gas Infrastructure — Drill Down Into the Market of Tomorrow With the Leaders Who Will Shape It.

The proposed reporting rules are currently being circulated for comment, she said. Once approved by CRE, the rules will allow for the government entity to publish daily average prices for gas. Specific information reported by traders will remain anonymous, with the data being published at the aggregate level.

The rules will “…require reporting to CRE every day volumes, prices and some other elements of information regarding daily transactions,” she said. “It’s going to be a very simple reporting system with the minimum possible cost for reporters, but it is an obligation of all traders with a permit to trade in Mexico to report their transactions.”

“…[T]he release of the information will give transparency and will facilitate more liquidity in the trading of natural gas from 2017 on,” she said.

Currently, first-hand sale prices of natural gas are regulated by CRE throughout Mexico, with the methodology seeking to reflect the opportunity cost of gas in the international market, De La Peza said. For instance, the price in Reynosa is based off of gas prices in South Texas plus transportation cost to the Mexican border. In the southern portion of the country, at Ciudad Pemex, the price is based off of that at Reynosa plus a netback based on transportation, she said.

“This first-hand gas price will be released partially in 2017,” she said. “The price in Reynosa will be set by market conditions; it will no longer be regulated by CRE, and the price in the south will be adjusted in terms of this methodology to represent in the most precise way the opportunity cost for this gas in the south. We will probably be announcing the specific details of this liberation process in the first quarter of next year. We are still analyzing and working on that.”

Eventually, it is expected that a nodal market, similar to what exists in the United States, will develop. First, though, the initial wholesale market needs to take root, De La Peza said. “It will probably take some time. We don’t expect that [nodal market] to happen in the very short term…Eventually it’s going to look like that.”

As the market blooms, there will be more price transparency and volatility, said Centro Nacional de Control del Gas Natural (Cenagas) Director General David Madero. “We should let the market start trading gas in wholesale markets, and then we will see where we get these transactions,” he said. “And that will establish, I think, the hubs, which will allow us to have domestic price markets, which should be more volatile than that which we observe today at Henry Hub.”

De La Peza said in the medium term it is expected that private price reporting agencies will develop methodologies for establishing price references in Mexico, which will be independent of references in the United States or other markets.

It also will take time for a financially settled gas market to emerge in Mexico. “I think we have to go step by step,” De La Peza said in response to a question about whether there will be financially settled trades. “We have to give the market some time to develop all the accessories to complement the physical market that will start next year, and eventually yes, we would ideally look for having a financial market in place, but I think we need the information, the bigger number of transactions, the liquidity in the market for some time before we see that happening in Mexico. So I think it’s going to be a medium-term objective, not something that will happen probably next year.”

Madero was asked about the longer-term outlook for gas demand in Mexico and whether the country might meet some of that demand by developing more of its reserves in the future. Demand is growing by about 0.5 Bcf/d per year while domestic production is declining at a rate of about 0.1 Bcf/d per year. Imports of around 4 Bcf/d currently are expected to increase to around 7 Bcf/d within the next five years, Madero said.

“Do I expect it to reverse at some point…I believe it will not,” he said. “We believe that we will have some increase in gas production after those five years and that Mexico has great prospectivity in exploration and production. There is no reason that technology should not flow from the United States, which has had a major breakthrough in exploration and production, particularly for shale and tight reservoirs, which should allow us to increase production.”

He added that Mexico’s gas reserves in the deep and shallow waters of the Gulf of Mexico also are under-explored. Domestic production should increase in the years ahead “…maybe in such a way that it will allow us to begin to reduce our imports and eventually to try to become an exporter of gas at some point in the future.”

Mexico’s liquefied natural gas (LNG) import terminals will see their role changing as the country imports more gas from the United States, Madero said. The LNG terminal on the country’s east coast, at Altamira, has been cutting back its regasification activity, he said. Meanwhile, the terminal on the west coast, at Manzanillo, has not seen such a reduction. The terminal at Altamira came in handy earlier this year when there was an outage at the King Ranch gas plant in Kleberg County, TX, Madero said. Regasified LNG helped make up for a shortage of pipeline gas from Texas during the outage. “That’s basically what we think will happen to these LNG terminals. They will become…terminals that will regasify on demand when conditions are right,” Madero said.

Nick Panes, a senior partner with Control Risks Mexico, is an independent consultant working with companies such as those that would like to do business in Mexico’s natural gas sector. He stressed the significant business opportunities afforded by the gasification of the country’s power generator sector and the liberalization of the gas market.

“We are likely to see more investment, more resources and more steps forward as it relates to this issue,” he said. “Part of that we’ve seen this year with the final approval of the enabling legislation for the new national anti-corruption system. We have an important window between now and the beginning of 2018 to see government implement some of the key elements of that new national anti-corruption system…[I]t enables existing structures and creates new structures to drive greater transparency, allow greater investigation and potentially prosecution as it relates to these issues. It will be critical and incumbent upon the current administration to really push forward on the implementation of the new anti-corruption system.”

There is much at stake country-wide in Mexico, not least of all in the natural gas sector.

“What has happened in Mexico over the last three or four years is a seismic change,” Panes said. “It’s a change that has required not insignificant political collaboration and the current administration should be lauded for that. The repercussions of that are that there has been massive change in legal and regulatory structures…I think it merits pause to recognize how much has changed in such a short time…It’s moving very quickly and at an appropriate pace.”