Mexico has big plans to become an LNG export powerhouse, but it might not have the pipelines or available capacity to do so, according to experts. 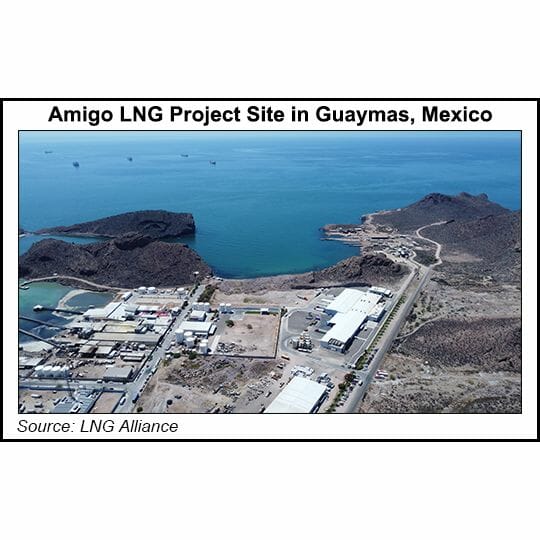 “Is there enough capacity and pipelines to support these projects? I don’t think so,” said the head of the Gadex consultancy, Eduardo Prud’homme, on Monday at the LDC Gas Forums’ U.S.-Mexico show in San Antonio, TX.

“There are a lot of moving parts that need to work in cohesion for these Mexico LNG projects to happen,” NGI’s Andrew Baker, senior editor, said during the event. Baker helmed a panel that included Prud’homme and Mexico energy expert Rosanetty Barrios.

“There is spare capacity in Mexico,” Barrios told the audience. The Comisión Federal de Electricidad (CFE) is “giving the signal it wants to use this spare capacity for LNG export projects.”

She said Mexico could still open up pipeline capacity to private sector companies, but only once the current administration of Andrés Manuel López Obrador is complete. The rules of the energy reform as enshrined in the constitution remain in place. “But if these LNG export projects go ahead, someone has to build new pipelines.”

So far, only the first phase of the 3 million metric tons/year (mmty) Energia Costa Azul (ECA) export project in Baja California, Mexico, is progressing, albeit with some delays. The project is sponsored by Sempra Infrastructure.

Prud’homme said New Fortress Energy Inc. (NFE) in conjunction with CFE could also see some advances. NFE executives last week said they expect to finish building their first “Fast LNG” unit by March. Operations could begin by mid-year offshore Mexico’s east coast, with several more units to follow. These include two at Altamira and one at the Lakach deepwater natural gas field off Veracruz state in a deal with state oil company Petróleos Mexicanos, aka Pemex.

Barrios, however, highlighted that Pemex has lost $43 billion so far in this administration, and the CFE another $7.59 billion, meaning the state companies may not be depended on for financing big-ticket projects.

There are other LNG export projects planned, too. President López Obrador said in September an LNG terminal could potentially be built in the port of Coatzacoalcos in southern Veracruz to export supply to Europe.

López Obrador said the potential project already had guaranteed gas supply and a project site. Coatzacoalcos is set to be the first stop of the 1.3 Bcf/d Southeast Gateway underwater pipeline, with gas originating in South Texas. Prud’homme said this underwater pipeline was the only major natural gas infrastructure project that would be completed during this administration.

Meanwhile, Singapore-based LNG Alliance Ltd. is developing the 7.8 mmty Amigo project in Sonora State. Mexico Pacific Ltd. LLC plans a project in the same state with a combined liquefaction capacity of 14.1 mmty. And Sempra is looking at another project, Vista Pacifico LNG, in Topolobampo, Sinaloa. The CFE also has floated an export project idea for Salina Cruz.

CFE is also in the process of developing the Mérida, Valladolid, Tuxpan, Baja California Sur, San Luis Río Colorado and González Ortega combined-cycle plants. There aren’t many details about their progress.

“These plants are going to get done. They have contracts,” Barrios said. “But only Tuxpan has the certainty of gas supply, with the marine pipeline. I’m not sure how the others are going to secure their gas.”

Prud’homme added that the potential in Mexico for natural gas demand and projects remained enormous.

“There is a lot of money. A lot of projects,” he said. “My question here is the local governments. To really have an industrial cluster, you need a lot of permits…So, we are going to see growth, but not at the level with all the potential there is.”