Mexico President Andrés Manuel López Obrador said during his daily press conference on Tuesday that an LNG terminal could potentially be built in the port of Coatzacoalcos in southern Veracruz to export natural gas to Europe. 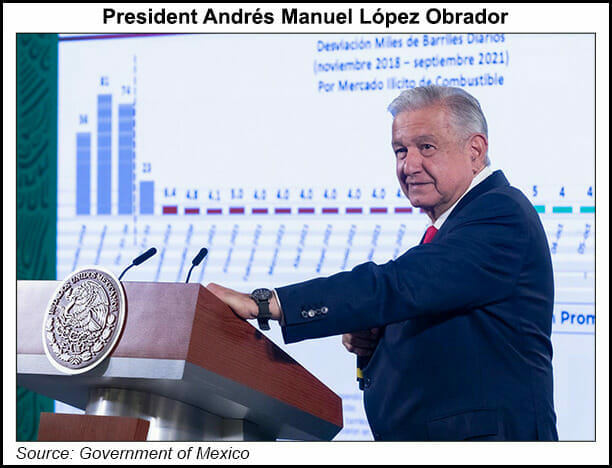 It’s not the first time López Obrador has talked about shipping gas to Europe as the continent reels from a dire energy crisis. Last week, German President Frank-Walter Steinmeier said during bilateral talks with Mexico, López Obrador “offered to step up cooperation on liquid gas.”

Recent high level talks between Mexico and the United States have also included discussions over cooperation on LNG projects given the new geopolitical landscape. Many of the discussed LNG projects sited in Mexico would source U.S. natural gas.

While a slew of liquefied natural gas projects have long been planned for Mexico’s West Coast, with one under construction, the idea of exporting from the Mexican Gulf Coast only arose after Russia’s invasion of Ukraine.

López Obrador said the potential project already had guaranteed gas supply and a project site. Coatzacoalcos is set to be the first stop of the 1.3 Bcf/d Southeast Gateway underwater pipeline, with gas originating in South Texas. Veracruz is also the richest hydrocarbon producing region in Mexico, and home to gas-rich fields such as Ixachi.

The Mexican president said the LNG project would cost $4-5 million. He did not provide a timeframe for construction.

LNG export projects, however, take many years from inception to the molecules actually being ready to be sent out in vessels.

One U.S. company may have a solution. Over the summer, New Fortress Energy Inc. (NFE) said it was looking to develop up to four fast LNG (FLNG) projects offshore Mexico’s Gulf Coast amid the global natural gas supply crunch.

At the port of Altamira, NFE plans to deploy up to three FLNG units, each with a capacity of 1.4 million metric tons/year. Feed gas for these units would be sourced from Texas via the 2.6 Bcf/d Sur de Texas-Tuxpan offshore pipeline, for which Mexican utility Comisión Federal de Electricidad (CFE) is the sole capacity holder.

NFE management said only 20% of the capacity on the offshore pipeline was being used, making it a win-win for both the CFE and NFE.

CFO Christopher Guinta said the Mexican government had agreed to expedite the permitting process. Last year, NFE unveiled the technology for the projects, which take about 14-16 months to be built.

Another FLNG unit would be deployed at the gas-rich Lakach offshore field, where NFE and Petróleos Mexicanos (Pemex) plan to jointly complete seven wells already drilled.

The opposite coast of Mexico is also home to up to four additional planned LNG export projects that would use gas sourced from the United States, principally from the Permian Basin.

The first phase of Sempra’s Energía Costa Azul (ECA) LNG project in Baja California is under construction, with 3.25 million metric tons/year (mmty) of capacity set to come online in 2024.