Mexico’s upstream hydrocarbons regulator on Thursday authorized a new auction for shallow water natural gas and oil exploration and production (E&P) leases, while also dropping a block from its ongoing deepwater round. 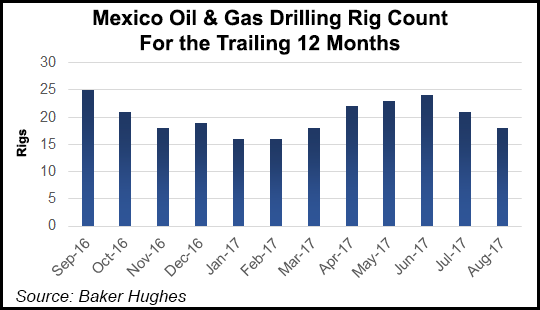 At its 48th extraordinary session of 2017, the National Hydrocarbons Commission (CNH) approved the bidding terms and schedule for round 3.1, the first auction of the third licensing round. Participants will bid on 35 shallow water blocks in four different basins in early April next year.

The commission published the call for bids in the official gazette and uploaded the auction terms to the Rondas de Mexico website on Friday.

CNH commissioners also voted to remove block 30 from consideration in round 2.4, so that environmental regulators could carry out additional impact studies. The auction, scheduled for the end of January, will now offer 29 deepwater blocks.

The blocks in round 3.1 span 26,265 square kilometers (16,320 square miles) in the shallow waters off the Mexican Gulf Coast. The acreage holds a combined 1.988 billion boe of risk-adjusted resources, or 70% of the shallow water resources that remain in the government’s five-year auction plan.

“According to crude production forecasts by the International Energy Agency, by 2025 output from shallow water projects will contribute the largest share of the country’s oil production, or approximately 51%,” Energy Minister Pedro Joaquin Coldwell said at a press conference Thursday. “This is mainly because projects located in these areas require less time to develop compared to other offshore projects.”

About 38% of Mexico’s estimated 25.7 billion boe in offshore resources are in shallow water areas, while the remainder are located in deepwater regions.

For round 3.1, the Mexico Energy Ministry, Sener, has allotted the 35 blocks to three different sectors encompassing four basins: the Burgos in the northeast, the Tampico-Misantla and Veracruz in the central region, and the Sureste in the south.

The acreage on offer includes various areas with the potential for natural gas production. Burgos contains 14 blocks with mostly wet gas and light oil prospects, while Tampico-Misantla and Veracruz hold 13 blocks of mainly dry gas prospects, as well as some light oil and wet gas.

Round 3.1 is the first auction to offer offshore leases in the Burgos field, the largest producer of non-associated gas in Mexico. It also includes eight blocks in the Sureste basin with light and superlight oil resource potential, as well as some heavy oil prospects.

“It’s worth noting that four of these 35 contractual areas fall under the regime of exploration and extraction clusters and contain eight discovered fields,” CNH’s Christian Uriel Moya Garcia, director of oil and gas resource evaluation, said during a webcast of the session on Thursday morning.

Two of these four areas are located in Tampico-Misantla and Veracruz and are leftovers from the most recent shallow water tender, round 2.1, while the other two are in the Sureste basin, Moya said.

With similar results to round 2.1, which awarded 10 blocks in June, the upcoming auction could allow Mexico to boost its production by up to 120,000 boe/d, according to Coldwell.

All of the leases in round 3.1 are to be offered as 30-year production-sharing contracts with two optional five-year extensions, following the same model used for round 2.1.

Bidders are to submit economic offers consisting of two variables — the state share in operating profits and an additional investment commitment, via an exploration work program of zero to 2 wells. The Mexican finance ministry will set the minimum and maximum government takes.

The bidding terms for round 3.1 also include changes to the bonus cash payments, previously used for tie-breakers. With the new tender, CNH will automatically open the bonus offers of bidders who max out their economic proposals and will charge the winner regardless of whether there is a tie.

“In the past we only went to the bonus payment if there was a tie,” CNH president Juan Carlos Zepeda said. “Now if you want to bid the maximum royalty or profit stake, you have to fill out the line that says, ”I will pay this bonus,’ and you will be charged even if you are the only one.”

Companies interested in round 3.1 can sign up for prequalification until Jan. 19, and the data room is open from Oct. 16 to Jan. 16. CNH will carry out the prequalification process Feb. 22-26 and release a final list of bidders on March 19. Bids are due March 27 and will be opened on April 2.

Round 2.4 is to take place Jan. 31 and include deepwater and ultra deepwater blocks in the Perdido Fold Belt and other areas in the Gulf of Mexico. So far, two companies, Total SA and BHP Billiton, have initiated the prequalification process.

The commission agreed to drop block 30 from the bidding at the request of the energy ministry. The block is north of the Yucatan Peninsula, about 24 kilometers (15 miles) outside of a buffer zone surrounding the Scorpion Reef National Park and 65 kilometers (40 miles) from the reef itself.

“To even further ensure the environmental integrity of this protected natural area,” Sener asked the Agency for Safety, Energy and the Environment, ASEA, to evaluate “if those distances and arrangements are adequate,” the ministry said Wednesday.

“Since the time required for the environmental study exceeds the timeline for carrying out the oil and gas round, Sener has requested that CNH exclude this contractual area from round 2.4.”

The commission has scheduled another Pemex farmout, for the Nobilis-Maximino deepwater discovery in the Perdido Fold Belt, to coincide with round 2.4 on Jan. 31.