With or without proposed federal energy reforms, Mexico holds increased prospects and challenges for San Diego-based Sempra Energy, which is eyeing more pipeline work, expansion into natural gas liquids (NGL) and the hurdle of increased taxes by the Mexican federal government. 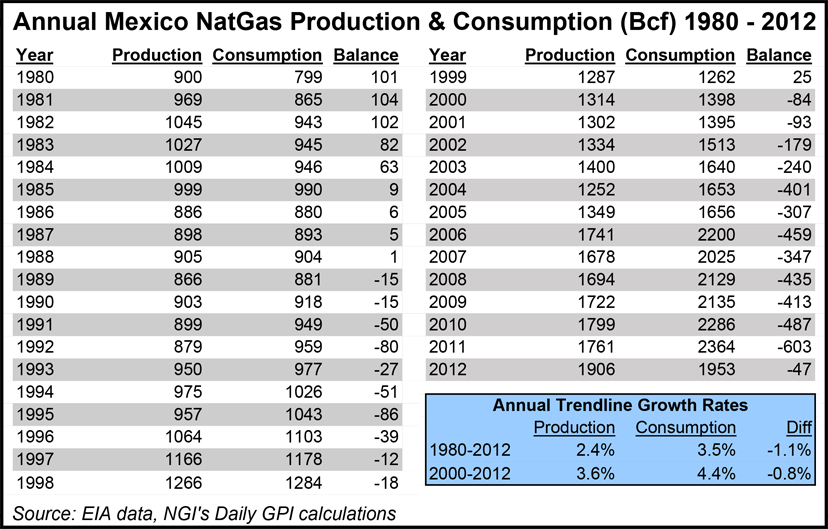 Sempra CEO Debra Reed and other senior executives outlined expanded opportunities for their already substantial Mexico operations as part of a 3Q2013 earnings conference call Tuesday. The company reported higher net income but reduced profits in Mexico, due mostly to the creation earlier this year of Mexican subsidiary IEnova.

After Petroleos Mexicanos (Pemex) aborted a competitive bidding process to build a second phase of its Los Ramones Pipeline, Sempra is negotiating with the Mexican oil/natural gas company to take a share of the $1 billion, 275-mile project (see Daily GPI, Oct. 16).

Sempra did not bid on Los Ramones II originally because it felt it did not have sufficient time to prepare a proper bid, according to President Mark Snell. “The bids Pemex got didn’t conform with the instructions or meet [Pemex’s] expectations, so they were rejected,” Snell said. “They came back and talked to the prospective bidders to get the project back on track.

“They came back and talked to us because we’ve had a long history with them, and we have a joint venture [IEnova] in place that is very successful. As a result, we are negotiating to get this project going and will take at least 25% of it.”

Reed said the second Los Ramones project is “important to Mexico” as it will help “ensure a reliable supply of natural gas to growing industrial centers. We will be working with Pemex to define the terms of the project in the coming weeks, and we expect [IEnova’s] participation will be at least 25%. Pemex will execute a long-term take-or-pay contract for all of the pipeline capacity.”

In the meantime, Sempra’s Mexican unit has begun construction of the Sonora Pipeline project, which is scheduled to come online in the second half of 2014. Two other joint venture projects with Pemex — another pipeline and the Los Ramones II natural gas pipeline — are expected to go into service next year, Reed said. A joint venture LPG terminal in Guadalajara also is expected to start operations before the end of this year.

Overall, Sempra has $2.5 billion in projects scheduled to start by the end of next year.

In response to analysts questions, Reed and Snell offered their spin on the proposed Mexican reforms, both in terms of energy projects and taxation. They emphasized that many of the reforms are focused on the oil side of Pemex.

“We have some interest in Sempra going into gathering and processing,” said Reed, adding that Mexican officials are looking to get more financial help in some offshore areas and leaseholds so Mexico can concentrate its own funding on more traditional onshore plays. “There are good opportunities for us to expand out of natural gas. We’re doing that right now with Pemex building an ethane pipeline.

“We see a lot of gas opportunities, too, with the push for more gas-fired electric generation, but we need not be limited to just gas.”

Snell added that even without reforms, Sempra is “well positioned” south of the border to build out the Mexican energy infrastructure. “As there is much more emphasis in Mexico in the need to invest in E&P, there are going to be new opportunities for us to fund more of their infrastructure projects.”

Natural gas consumption in Mexico is growing faster than the country’s production and has been for some time, according to Energy Information Administration data. Between 1980 and 2012 consumption outstripped production by 1.1%.