Mexico’s weakening economic growth prospects could be additionally hurt by a lack of reliable supply of cheap natural gas and electricity, several experts have warned in recent days. 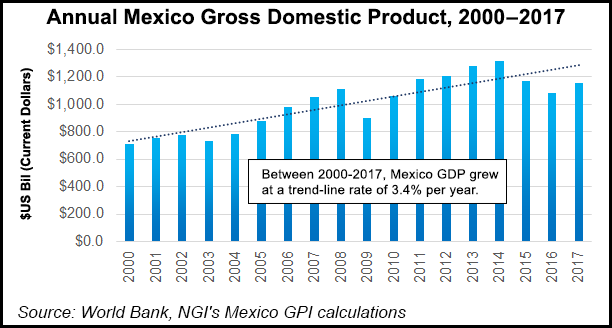 The outlook for both appears less than certain over the near-term, amid declining hydrocarbon output by national oil company Petróleos Mexicanos (Pemex), pipeline bottlenecks preventing the arrival of cheap shale gas from the United States, and government efforts to delay the shuttering of legacy thermal plants powered by diesel and fuel oil.

Central bank Banxico is forecasting economic growth of between 1.1 and 2.1% for 2019, and between 1.7 and 2.7% for 2020, both downward revisions from the bank’s previous projections.

If gas supply challenges for industrial consumers persist, recent experience shows that growth could slow even further, according to Bank of Mexico (Banxico) economist Carlo Alcaraz.

In a webcast interview earlier this month with Mexico City-based think tank Pulso Energético, Alcaraz cited the example of 2013, a year in which Mexico’s economy grew by 1.4%, down from forecasts of 3% at the beginning of the year.