Calling natural gas flaring “a wasted resource,” Commissioner Jim Wright of the Railroad Commission of Texas said the problem in Mexico needs to be solved by improving markets. 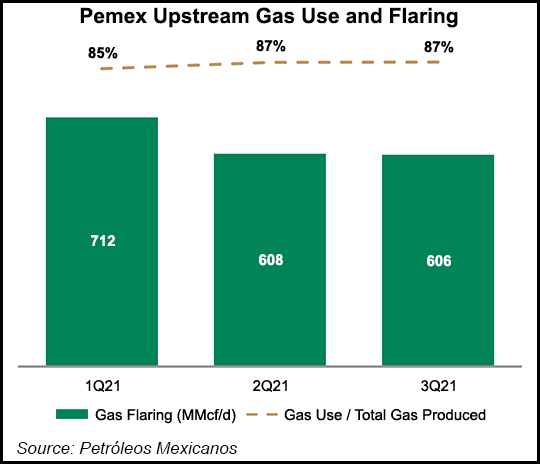 Speaking Tuesday at the U.S.-Mexico LDC Forum in San Antonio, TX, Wright cited the fact that flaring was plunging in Texas and was now at half a percentage point of produced gas; whereas Petróleos Mexicanos (Pemex) flared 13% of its gas in the third quarter, or 606 MMcf/d.

“A sustainable natural gas market will eliminate waste and most needs to flare,” Wright said. “The solution to the flaring problem is at the market,” and “not at the wellhead,” he added.

Pemex CEO Octavio Romero Oropeza said in October that Pemex wanted to get the flaring number down to 2% next year, without providing details. According to the World Bank’s Global Gas Flaring Tracker, flaring in Mexico rose year/year in 2020 for a third straight time to 5.77 billion cubic meters (Bcm) from 4.48 Bcm in 2019.

Wright said before Mexico invested in exploration and production for new gas it needed to spend on transport infrastructure and markets to enhance its ability to maximize produced gas. Part of that spending, he added, should be on natural gas storage.

“Storage is key,” he said. He added that additional storage was needed on both sides of the Rio Grande to “prevent what happened in February” from happening again. He was referring to Winter Storm Uri, which interrupted natural gas supply in Texas, sent prices into the stratosphere, and knocked out power to four million Mexican homes.

“I think that we were all surprised by what the winter storm presented for us. It showed us how important natural gas movement was across the state,” he said. “We got a call from the governor’s office that the gas needed to be moved to human needs and we had to put out a directive” telling pipelines to keep gas in-state. “I wasn’t sure we had the authority to do that and I still today think we don’t have the ability to do that.”

He said natural gas storage in Texas was even more important than winterization and that operators since February “have put a great focus on reliability.”

He added that storage in Mexico would not only provide backup supply but help spur projects to get Texas gas to Asian markets. He said Texas was “constrained by capacity and transportation issues” which presents “severe additional challenges” and prevents firm delivery of more liquefied natural gas (LNG) exports to Asia.

As many as four LNG export projects are under development on Mexico’s western coast. The gas would mainly be sourced in Texas.

The Baker Institute for Public Policy’s Tony Payan said during the same event that Mexico’s current trajectory didn’t bode well for the upstream segment, especially if the proposed counter reform in the electric power industry goes ahead.

“The reform would be a disaster for Mexico,” he said. “It disincentivizes all investment. The president really believes the future of Mexico is burning fuel oil for electricity and refining more oil. He thinks it’s worth the price.”

The National Renewable Energy Laboratory (NREL), a division of the U.S. Department of Energy, said in a recent report that the reform would lead to Mexico increasing its carbon emissions by between 26% and 65%. The counter reform also seeks to eliminate independent regulators in the energy industry in Mexico, decreasing oversight of the market.

Payan said the reform wouldn’t get through the nation’s congress, but he doesn’t see the business environment in Mexico improving until the next government in 2024.

Mexico President Andres Manuel Lopez Obrador “won’t be able to eliminate regulators, but he’s already co-opted them. The 2022 budget cuts the funding for them. He won’t wipe them off the map, but he’ll starve them,” Payan said.

He added that the frontrunners for the next president include Mexico City mayor Claudia Sheinbaum and foreign secretary Marcelo Ebrard, both of whom are part of the president’s Morena party but are seen as more moderate than Lopez Obrador.

“The next president is going to have to face the music and make some serious changes,” Payan said. “They will probably see that the only way to recover is to go back to the neoliberal model. The potential for Mexico to become a powerhouse is incredible. The potential is there. This will be a wasted period.”