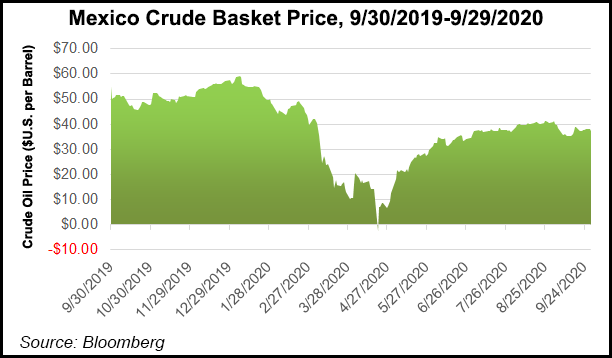 Additional credit rating downgrades of Mexican national oil company Petróleos Mexicanos (Pemex) and of the sovereign are among the biggest internal risks facing the country’s economy as it struggles to emerge from a still-raging coronavirus pandemic and economic downturn, according to local authorities.

In its latest summary of risks facing the economy issued Tuesday, Mexico’s Consejo de Estabilidad del Sistema Financiero (CESF), or financial system stability council, warned of a rocky road ahead for Mexico and the world as Covid-19 cases continue to surge and/or resurge, depending on the country.

Board members of Mexico’s central bank Banxico also warned at an August meeting of  potential Pemex and sovereign downgrades, citing a survey conducted by an investment bank in which a majority of respondents expected these to occur in 2021 or 2022.

Banxico board members warned of the company’s “operational deterioration,” as well as looming debt maturities that could require greater fiscal support from the government.

Pemex, the world’s most indebted major oil company, reported a quarterly loss of $24 billion in April after a net loss of $18 billion for full year 2019. It also had reported a staggering 1,431 coronavirus deaths among workers, retirees, family members and outside contractors as of Tuesday.

President Andrés Manuel López Obrador has sought to resurrect Pemex as an engine of “energy sovereignty” while stifling new investment opportunities for the private energy sector.

“The administration’s vision for the energy and hydrocarbon sectors is rooted in a deeply nationalistic sentiment regarding the role of the state in the control of strategic national resources, notably oil,” said the Natural Resource Governance Institute’s (NRGI) Alonso Hidalgo, Latin America officer, in a September 22 analysis.

“Well into the second year of the administration, the government’s struggle to turn Pemex around has been well documented. Now, with the pandemic in full swing – and no relief in sight for oil producers – there are reasons to question this strategy.”

Longer term, Hidalgo said, “the propping up of Pemex as the economic backbone of the country could entail huge risks for Mexico’s overall financial stability,” especially if an accelerated global energy transition leads to lower long-term oil prices.

As for the economy, “global and national financial conditions are subject principally to the pandemic,” CESF said.

After a severe contraction in March and April, since May there has been a “certain recovery” in global economic activity, council members said. However, the recovery has been unevenly distributed among countries, and the outlook for its strength and duration remain highly uncertain.

“Additionally, the number of infections in the United States and Latin America remains elevated, and has rebounded in some European and Asian economies,” they continued, meaning “it could be necessary to implement new confinement measures, with the risk of limiting the economic recovery.”

After the extreme volatility observed in global financial markets during March and April, the subsequent months showed “a more organized behavior, reflecting the gradual reopening of the economies, as well as the effects of fiscal, monetary and financial stimulus adopted in the advanced economies, which also fostered a better environment in emerging economies.

“In this context, Mexico showed a reduction in risk premiums and interest rates for government bonds showed moderate movement throughout the yield curve.”

The Mexican peso also has strengthened against the dollar since April, although it has been pressured again in recent days due to resurgent volatility in international markets, the CESF team said.

Mexico’s pipeline natural gas imports from the United States have stayed resilient amid the pandemic as well, amid steady demand from the power generation and industrial segments.

Mexico had recorded 77,163 coronavirus deaths as of Wednesday, according to Johns Hopkins University.