Mexico President Andrés Manuel López Obrador surged to power in 2018 on a campaign that centered around defeating rampant corruption, but a new index published by Americas Society/Council of the Americas (AS/COA) and consultancy firm Control Risks shows a relative lack of progress in the country in comparison to its regional peers. 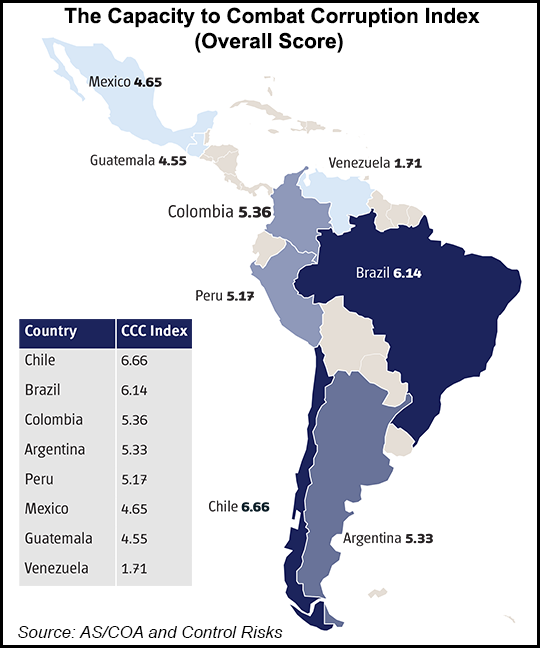 The inaugural edition of the Combating Crime and Corruption (CCC) index covers Argentina, Brazil, Chile, Colombia, Guatemala, Mexico, Peru and Venezuela, or almost 90% of Latin America and the Caribbean’s gross domestic product (GDP). It measures 14 variables, from independence of judiciary to strength of investigative journalism.

The country with the highest overall score was Chile; Mexico came in a distant sixth.

“An anti-corruption wave has been sweeping Latin America for the past five years, putting powerful figures in jail and shaping electoral outcomes. The CCC Index provides us a comparative tool to better understand this phenomenon,” said AS/COA’s Roberto Simon, senior director of policy.

In Mexico, “a key area of concern is judicial efficiency and independence: courts generally remain prone to political meddling and face a major backlog of cases,” the CCC index indicated. “Also, the implementation of a new accusatory judicial system designed to expedite judicial processes remains patchy.”

At the end of May, Mexico took a massive step in demonstrating its commitment to fighting corruption when it charged the former chief of Petróleos Mexicanos (Pemex), Emilio Lozaya, with tax fraud and receiving bribes related to the company’s purchase of a fertilizer plant.

The days of corruption at Pemex “are over,” López Obrador told oil and gas workers at the Ixachi field in late May. “It’s going to end.”

Lozoya is also accused in a case related to Brazilian construction firm Odebrecht’s payment of hundreds of millions of dollars in bribes to officials throughout Latin America to win government contracts. It remains unclear however whether Lozoya will be prosecuted.

Mexico is late to the crackdown on the Odebrecht scandal. Although the Brazilian group signed a leniency deal with U.S. and Swiss authorities confessing to its corruption and paying $2.6 billion in fines in 2016, Mexico Attorney General Alejandro Gertz Manero has said he will present his case against Odebrecht in the country by the end of July.

Current debate in Mexico’s Congress to remove immunity for all government officials, including the president, in corruption-related cases, will be key to further efforts.

“The appointment of an anti-corruption attorney general in February has not yet resulted in an intensified crackdown on corruption,” according to the CCC index. “Most public officials involved in major corruption scandals over the past five years…remain uninvestigated despite documented evidence of wrongdoing.

“Enforceability of anti-corruption legislation remains deficient compared to other countries, while corruption cases investigated by authorities are often seen as politicized.”

López Obrador’s resolve will also be tested as members of his National Regeneration Movement (Morena) party face corruption allegations. “A case in point involves the Morena federal delegate in the state of Jalisco who faces conflict of interests allegations in the awarding of contracts to provide medicines to state hospitals through pharmaceutical companies owned by him,” according to the CCC index.

The government has countered by saying that the effort to fight corruption at the beleaguered state oil company is already showing tangible results. Energy Minister Rocío Nahle has said that in the fight against fuel theft, a key part of the anti-corruption message of the new government, at least 1,000 arrests have been made, and those accused are being prosecuted.

Pemex cites lost revenue of upwards of $6 billion in 2017-2018 related to fuel theft. López Obrador said recently his government’s actions, which have included sending in the armed forces to overlook operations at refineries, storage and distribution terminals, have so far resulted in a decrease of 95% in illegal taps.

Still, analysts are unimpressed, arguing the effort hasn’t improved the bottom line at the state firm. Earlier this month Fitch Ratings downgraded Pemex bonds to “junk” status, while Moody’s Investors Service lowered its outlook for the state-owned giant to “negative” from “stable.”