Mexico not only aims to conclude its Round 2 upstream auctions with one covering nonconventional sources, but energy officials now are eyeing a Round 3 that also would include one covering shale and tight resources before the end of 2018, according to the energy secretary. 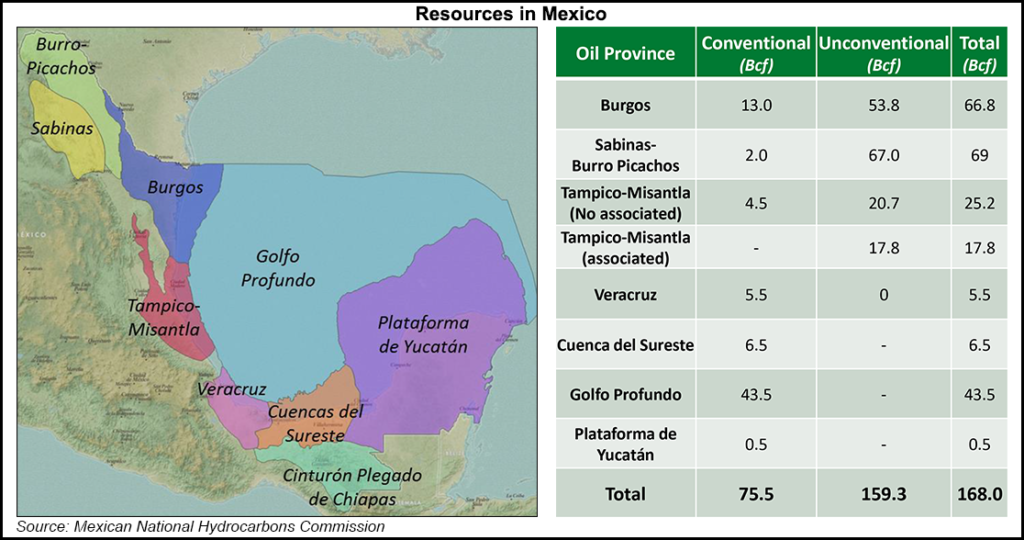 Mexico Energy Secretary Pedro Joaquin Coldwell discussed the status of the auction process at a recent conference in Mexico City organized by magazine Energia a Debate.

While oil may be a primary target for explorers, the decline in Mexico’s natural gas production “represents a risk for the nation’s energy security,” he said.

The industry regulator National Hydrocarbons Commission recently reported that Mexico currently imports 81% of the natural gas it consumes. And gas production is dropping sharply. The most recent production report by state-owned Petroleos Mexicanos said gas output in the first week of August was 5.05 Bcf/d, about 2 B/cfd less than in 2009.

“We can’t go on increasing the current level of dependence on imported gas,” Joaquin Coldwell said.

The successful auctions of Round 2.2 and 2.3 were the first under the country’s energy reform to feature natural gas on a prominent scale. However, the auctions also featured conventional resources.

“And about half of the nation’s hydrocarbon resources are nonconventional, but are almost untouched,” Joaquin Coldwell said.

The next auction in Round 2.4, is for deepwater blocks. Details of Round 2.5, further disclosed last Monday at the U.S.-Mexico Gas Forum in San Antonio, likely would include onshore parcels in the Burgos Basin, which extends from Texas, and in the Misantla Basin, on the Mexico coastal state of Veracruz.

Terms are to be announced “within a matter of weeks,” the energy secretary said.

One concern for some energy advocates is Mexico’s political calendar, which sets next July for the next presidential election, while the inauguration of a new president is due in December 2018.

President Enrique Pena Nieto, the architect of the energy reform, is not a candidate as presidents have six-year terms and may not be reelected. While a few political analysts worry the next regime could slow or sabotage the energy reform process, Joaquin Coldwell appeared to reject that suggestion.

Plans are already underway for Round 3 of the reform, he said. Auctions initially are to feature conventional sources in shallow waters and on land, as in the first two rounds. Auctions likely would be held beginning in September 2018, with a deepwater auction and one for nonconventional sources “before the end of the administration” in December 2018, Joaquin Coldwell said.