Eyeing increased federal revenues from the opening of the nation’s energy plays to foreign investment, Mexico’s federal government recently established a special fund in the Bank of Mexico, the nation’s central bank. 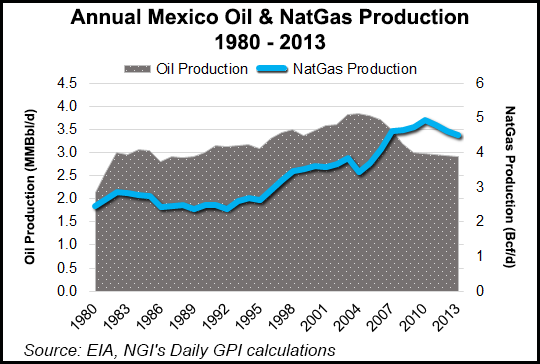 Income from oil and natural gas activities will be distributed by the Mexican Oil Fund for Stabilization and Development to the federal government’s budget and to a long-term savings account. This is a fiscal response to the actions earlier this year by the Mexican government to overhaul its energy industry and invite in more private investment (see Daily GPI,May 7).

In a statement issued by the central bank, officials indicated that they have been closely following the work of the Mexican Congress in enacting the reforms of the energy sector, including a role for the bank, which has now been formalized in an agreement signed last Tuesday between Bank of Mexico and the Ministry of Finance. It calls for “full transparency” of the fund’s operations.

“It is clear that a fund needs to be an organism that would provide in a timely, accurate and clear manner, the information necessary to society relating to the receipt, management and use of resources resulting from the production of oil and other hydrocarbons,” said Bank of Mexico officials, noting the historic role the central bank has played as the federal government’s financial agent.

The bank stressed that the new fund will be geared toward ensuring that “income derived from the extraction of oil, owned by the nation, will produce benefits for present and future generations.” The constitutional mandate for the fund is that it invest in “savings instruments with long-term objectives.”

Finance Minister Luis Videgaray also announced the creation of three other funds to promote local contractor participation in the energy sector; to bring electricity to more remote rural areas; and to help small savers with investment opportunities expected to emerge from the nation’s energy reforms.

Videgaray called the larger oil/gas fund “a fundamental instrument” that should help stabilize public finances in the coming years. He called it “an instrument of long-term savings” that Mexico has never had before.

Officials in Mexico City are hoping this brings a windfall of additional taxes and royalties that will bolster the nation’s public finances and the Mexican economy. Currently, Pemex provides about a third of the nation’s budget through distributing all of its profits to the central government.

Under the new oil fund, oil/gas revenues will go to the federal budget until they reach a threshold of equaling 4.7% of Mexico’s gross domestic product. After that, revenues will be added to the long-term savings fund. Additional oil revenues are expected from the private investment, which is expected to reverse the current decline in the nation’s oil production.