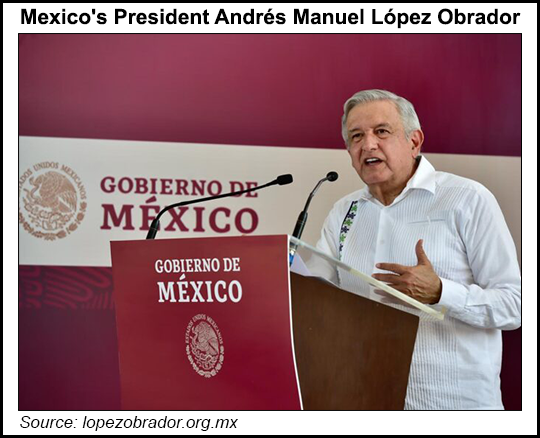 The news, which was first reported by local outlet Expansión, sent shockwaves through Mexico energy circles, and follows the circulation of a memorandum attributed to the president outlining his vision for giving preferential treatment to Pemex and CFE.

NGI’s Mexico GPI independently confirmed the news through a CRE source with direct knowledge of the meeting.

A CNH spokesman said the upstream regulator did not have information on the meeting, while the other regulatory bodies had not responded to requests for comment as of Wednesday afternoon.

The memorandum lays out a list of 17 objectives, which include freezing any increase in real terms of gasoline, diesel, gas and electricity prices; ceasing oil exports, in order that Mexico only produce the amount of crude needed to supply its domestic refineries; achieving oil production of 1.8 million b/d in 2020 and 2.2 million b/d by 2024; and giving CFE-owned power plants priority in the dispatch order.

Daniel Salomón Sotomayor, an associate with Mexico City-based law firm Gonzalez Calvillo, told NGI’s Mexico GPI that if the regulators follow through on López Obrador’s directive, “companies and social organizations may file lawsuits arguing that such changes contradict the main principles of the constitution and hydrocarbons law.”

He added, “I think companies will have chances to win however, in fact the functions of CRE will be paralyzed.”

Eduardo Prud’homme, founder of the Gadex consultancy, expressed a similar view with regard to the natural gas segment, saying that while authorities are unlikely to revoke existing permits, they could slow the awarding of new ones.

Former commissioners of the CRE, which is similar to the U.S. Federal Energy Regulatory Commission, have warned that Mexico’s energy regulators are losing their independence and autonomy under the current regime.

The new commissioners “have no sense of what they’re there to do…and that is important because in the very end of things, what happens is investment goes to zero,” added former commissioner Montserrat Ramiro.

Tuesday’s meeting is part of a larger effort by the current government to weaken the 2013-2014 energy reform, which ended the monopolies formerly held by Pemex and CFE.

The director, Alfonso Morcos Flores, was appointed by López Obrador when the new government took power in December 2018. The motive behind his resignation was not yet known.

He will reportedly be replaced by Carlos Gonzalo Meléndez Roman, a sub-director of strategy and regulation at CFE.

The resignation of Morcos Flores had not yet been confirmed by CENACE at the time of writing.