“I feel like Mexico is really standing at the edge of a cliff and deep down at the dark bottom of that cliff is Venezuela,” said Marcelo Mereles Gras, veteran Mexico energy expert and partner at HCX Hydrocarbon Exchange, in reference to the legislation proposed by President Andrés López Obrador on Oct. 1 to undo the constitutional reforms that opened the industry to private investment. 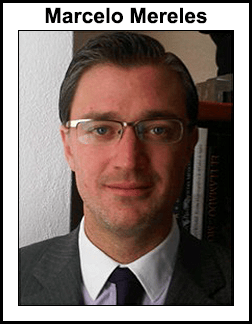 “The effects of this legislation, if approved, are going to be brutal for the Mexican economy. Just brutal,” he said.

Since 2011, Mereles has been a partner at HCX Hydrocarbon Exchange, a consultancy firm based in Mexico City and Houston that specializes in project analysis, development, startup and operational management. Previously, Mereles worked at Petróleos Mexicanos (Pemex) from 2001-2009, where he served as the head of international relations and as a financial analysis coordinator, overseeing project investment evaluation for Pemex Exploration and Production (PEP) and the refining unit.

He also worked as the head of the international relations unit and chief advisor at the Labor and Social Welfare Ministry (STPS) from 2009-2011. His resume also includes a stint at the state Attorney General’s Office (PGR) in 2006 and as deputy director of international information in the Mexican presidential offices from 1996-1999.

NGI: What were your initial thoughts on the electricity reform bill presented by López Obrador on Oct. 1?

Mereles: The initial thoughts are that this is a very aggressive move from the Mexican government. They are going way beyond what they promised. An electricity reform had been promised and this obviously goes way beyond that.

This is a move that would affect not just the electricity sector, but the hydrocarbon sectors as well. It’s a move that is going to render the country much more helpless to regulate the sector and to prevent changes in the future. Because if you leave regulation to Comisión Federal de Electricidad (CFE), [whose leadership] is presidentially appointed, and to the Energy Ministry, which is also presidentially appointed, somewhere down the line, a government with a radically different vision is likely to come in. Nothing’s going to stop them, with just a swirl of the pen, to change everything back again or go even farther in the opposite direction. That is a problem.

The technical safeguards and roadblocks in place that assure an institutional framework are going to be gone. It’s just going to be the president giving a call to the secretary of energy and the director of CFE and saying, “hey, I want you to change this and this,” and it could be done. So, if this is approved, there’d be nothing in place to stop these changes from being done — maybe a few secondary laws — and that’s also true if there’s a radical change in the opposite political direction. A new president could come in, reopen the market and grossly favor private companies or whomever they want.

López Obrador says that the 2013 reform wanted to favor private companies. That’s a lie. The 2013 reform was designed to favor no actor in particular. It aimed to favor the consumer and create a competitive environment where everybody could compete on a level playing field. With these changes that are being proposed, if somebody comes in with a totally different agenda, within months, they could say, ‘destroy the CFE because my best friends are the private generating companies,’ and there’s not going to be anyone to stop that because there’s no longer regulatory or technical bodies. By undoing the regulatory bodies, they could eliminate safeguards and barriers, which could cause a lot of problems.

NGI: Of the new legislation proposed, what do you consider the most shocking or surprising elements of it?

Mereles: I think there are three three main factors that surprised me and made me realize this reform aims to go further than I thought and is more radical than expected.

One of them is eliminating the regulators, which have already been weakened by the state. It’s not even necessary to eliminate them. They’re not even standing in the way now. So that is one surprise because it’s institutional destruction.

Number two: I was very surprised by the fact that CFE is going to be all-powerful and that the Finance Ministry may not even have any say in the pricing of power tariffs. The final consumer pricing is thus whatever CFE wants to make it. This is a company that requires huge subsidies and extensive financial planning on the budgetary side, so if they’re setting market pricing, their income is going to rise a lot or fall a lot and will impact national inflation for consumer prices, as well as public finances. So that was pretty shocking.

Another was the cancellation of all private generation contracts, meaning existing contracts will have to be renegotiated under different terms. That has implications we cannot even fathom right now and will mean the loss and exit of a lot of companies. All contract arbitration may end up in courts and international tribunals, which could cost billions of dollars.

The third part is the announcement of eliminating the Clean Energy Certificates (CELs). There’s not even a reason given for getting rid of the CELs in the proposal. Just a statement. We’re supposed to be in the middle of a global energy transition and many of the brightest minds in the world have said that this is the biggest challenge that humanity has ever faced. And at the same time, the Mexican government is just saying: “We’ll cancel one of the few mechanisms we have to ensure that energy generated is cleaner.”

So that is also pretty shocking.

NGI: You mentioned renegotiating contracts and the potential for international arbitration. What kind of impact do you think that could have on the energy sector and economy in general?

Mereles: Huge scale impact. Godzilla-sized impact. Really disruptive, not just to the power sector but to the entire economy.

NGI: And if there are more contract renegotiations or cancellations, particularly with U.S.-based companies, do you think the U.S. government might try to intervene at some point?

Mereles: It’s a bit hard to say because the Biden administration’s response towards a lot of things that have been going on in Mexico has been perplexing. Currently, the migration story is obviously the dominating topic. As for other topics of bilateral interest, the U.S. is just kind of letting it flow. Organized crime hasn’t been as big of a topic of late, and neither has any of the changes in the energy sector. I find that perplexing.

I know the U.S. is dealing with a lot of difficult international issues right now and the legislative agenda of the administration is under threat as we speak. They have their hands full with China, Russia. There’s a lot going on there but I don’t think it’s a good idea to neglect one of your top trading partners and next door neighbor, particularly in energy, which is so vital to the economies of both countries.

I can’t really say with any certainty that the U.S. is going to participate in these bilateral energy dealings. I’d hope they do take a stance on this soon and at least apply some pressure, given the economic interests on both sides, but I don’t know if I have a lot of hope for that. I don’t think the solution lies there, actually. It looks like the solution is going to lie in the courts and the companies, many of which have a lot of resources and lawyers that will likely try to solve these issues in international arbitration or foreign courts because there’s not a lot of trust in the Mexican legal system.

NGI: How do you think that will impact investment in the sector and the Mexican economy?

Mereles: If the understanding is that CFE is the all-powerful authority in the electricity sector that is regulating the price of power, it’s hard to imagine any company in the world, Mexican or foreign, is going to want to invest a single penny in either a new operation or expanding or modernizing an existing operation. For like 90% of all industries, electricity is one of the top three or four most vital inputs in operation cost.

Who is going to want to invest a penny in a country where you don’t know if — from one month to the next — you’re going to have enough electricity, what its quality is going to be, what the price is going to be and in a place where you have no way to defend yourself against arbitrary changes in pricing?

Who is going to want to launch a greenfield project? Or invest a few million dollars to renew their plant? The industry will begin to resemble Venezuela, where if you go to any private factory that is still operating, it’s rusty, corroded. The owners have not invested a single penny in their facilities because they know that they can be expropriated at any time or the army can come in and shut it down. So basically, you stop investing and your company runs until everything cracks and can run no more. So that’s what  could happen in Mexico. Nobody’s going to want to invest a single penny, not just in new projects, but in the upkeep of existing factories and manufacturing facilities.

That’s the seriousness of all this. That’s why I feel that we’re standing on the edge, the very edge of a cliff. And if we take this step, we fall all the way down to Venezuela.

NGI: Do you think this bill could pass in the legislative houses?

Mereles: I think that putting the country’s destiny in the hands of the PRI party is a very, very risky proposition. The PRI has shown over the years that they are willing to wheel and deal and bargain for their own benefit.

I think Morena needs like 54 legislators from the opposition to vote in favor of the bill.

And there’s likely to be some coercion, pressure, or use of favors on the part of PRI legislators in an attempt to get the bill through. There’s also the possibility and risk of monetary bribes or kickbacks to get what they want approved. That’s the way these things can play out.

So to answer the question, I think it’s feasible that this legislation could pass. The PRI hasn’t shown any signs of repudiating the reform. On the contrary, all they say is, ‘this has to be analyzed.’ Other opposition parties came out and said very clearly, ‘this is incredibly harmful to the country.’ You don’t need more than 24 hours to study the proposal and see what the effects of this are going to be. So the fact that the PRI has not spoken out against the proposal says a lot. It says volumes.