“There’s been a lot of talk about a downturn in the Mexican energy industry but I don’t necessarily see it that way. There are plenty of gems that are there for the taking in Mexico if you know where to look,” said Dino Barajas, partner at the law firm DLA Piper. “As a potential investor, it’s like going to a big sale. If you get there first, you’ll have first dibs on whatever you want. It’s really about knowing where to look for opportunity and having someone who knows the industry to advise you on that process.” 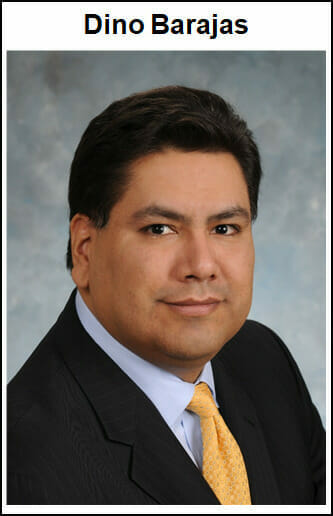 Barajas added that “a lot of companies entered Mexico looking to develop projects in the gold rush period following the energy reform. Many of them have since left the country while the smart ones, the ones who understand energy is a long-term game, have stayed put.”

Barajas, who has been partner and co-head of U.S. infrastructure and projects and energy mergers and acquisitions at DLA Piper LLP since last year, has worked on energy deals in Mexico and Latin America since 1993. A veteran of the energy industry in the Americas, he was previously a partner at Akin Gump Strauss Hauer & Feld LLP from 2010-2020 and has worked on transactions in Argentina, Brazil, Chile, Colombia, Costa Rica, Curaçao, Dominican Republic, El Salvador, Guatemala, Honduras, Mexico and Nicaragua, as well as several other international locations.

He graduated with a J.D. from Harvard Law School in 1993 and earned his bachelor’s degree in communications studies from the University of California, Los Angeles (UCLA).

NGI: As someone who keeps an eye on the entire region, in your opinion, which country or countries are currently the most promising in terms of energy project development?

Barajas: Brazil is always a market that has good development potential given its size, vast needs and demand. The population is large and there are good development opportunities across the country, either in renewables or in other technologies. The risk with Brazil is that, historically, it functions on boom or bust cycles. At times the doors are wide open and project development is rampant, though historically there are downturns and times where the country is less investor friendly. For any investor considering Brazil, it’s important to understand the boom and bust cycle and to be prepared for it and know how to deal with it when it occurs.

Another one is Chile, where energy projects are often tied to commodity development projects. With so much energy needed for commodities development, such as in the mining industry, there are plenty of opportunities for renewable projects to act as an energy source for those projects. The risk there, however, is commodity prices. If commodity prices fall for example, demand falls and therefore less energy generation is required. With dramatic swings in commodity prices, energy project developers need to understand that risk.

Central America is also an attractive market, albeit a much smaller one. The region has vast and diverse energy sources available, such as wind, solar or geothermal, and most regional countries have good opportunities for smaller scale project development. Typically the processes to develop a project can be slow in these countries, where there are sometimes hiccups that can complicate the progress of new plant construction so it’s important to be in a position to be flexible and creative.

NGI: How does Mexico compare to other regional peers?

Barajas: Mexico is always an attractive energy market. There is such an important relationship with the United States, particularly in northern Mexico and along the U.S. border, and there are always opportunities on both sides to strengthen ties and improve energy efficiency. There is also a large population in Mexico with high demand for energy and lower prices.

There’s been a lot of talk about a downturn in the Mexican energy industry but I don’t see it that way. There are plenty of gems that are there for the taking in Mexico if you know where to look. Even during a complicated stretch, Mexico is an attractive market for energy development.

NGI: You mentioned that there are gems in the Mexican energy industry rife for development if you know where to look. What, in your opinion, are those gems that could be developed in Mexico?

On the power side, I think if you’re a large corporate and especially if you’re an industrial company, you’d better start looking at opportunities for your own power supply. Simply because you need to get ahead of the wave of there not being sufficient investment in the electricity sector by the government for the last three years, and likely there won’t be much in the next three years. So, if energy usage is something that affects your business, you may want to be in a position to help yourself when the market — in terms of policies and lack of investment — isn’t going to be able to provide and fulfill your needs.

Also, from a private equity perspective and especially from the opportunity fund perspective, there are tons of projects that I know about that you can pick up right now that are “little to no money down” type of deals because the original investors have written down the investment. When you think about it from an accounting perspective, when you have to close out the books at the conclusion of a fiscal year, you have to determine the real value of an asset. So, if you have an asset that’s been impaired, there are financial reporting requirements that will force you to reevaluate the true value of an asset on your books. And, now that López Obrador, or AMLO, has been in office three years and enacted some of his policies that have impaired assets in the country, that’s reflected on your books.

For the owners of those companies, you’ve already taken a hit. Though, as a potential investor, this could be a time of opportunity. Assets have been written down, in some cases to zero, and owners are looking to sell to salvage something from their original investment. So, as a potential investor, it’s like going to a big sale. If you get there first, you’ll have first dibs on whatever you want. Right now, it’s really about knowing where to look for opportunity and having someone who knows the industry to advise you on that process. There are plenty of diamonds in the rough out there if you know where to look, and, in my perspective, those are the opportunities in Mexico.

Barajas: The smart ones do. In terms of international companies, the smart ones will stay in Mexico because they’re playing the long game and they know the market will come back. Those are the ones that should be evaluating future opportunities in the market.

What I am telling clients is to start looking at the opportunities now. It’s important to start evaluating the challenges now because they need to be ready ahead of the entrance of the new administration. In terms of the current administration and AMLO’s policies, because Morena lost the majority in congress, they now need to work with other parties in order to get anything passed, which means that some of the legislation he pushed for previously will have to be dialed back as more negotiation will now be required prior to passing anything. I think it’s a less volatile environment for investors going forward because you won’t have the massive swings from pro-business to anti-business sentiment in proposed legislation. Ultimately, the other parties, as well as AMLO, don’t want to harm the Mexican economy because that would ultimately affect the working poor in terms of higher food prices and higher inflation across the board.

NGI: What do you expect in the Mexican energy industry in the final three years of the current administration?

Barajas: What has happened as a result of some of the anti-business and anti-foreign investment legislation and sentiment is a stoppage of the introduction of new technologies, new efficiencies and the betterment of services on all fronts. Prices were coming down and Mexico’s energy industry was improving.

In the short term, when economies come roaring back as the pandemic hopefully slows down, you’re going to find that Mexico has high energy demand and might not have all the capacity  to meet that demand, whether it’s on the natural gas side or the power side. That’s simply because, during the first three years of this administration, there hasn’t been the needed investment to maintain what was there, much less build additional capacity and redundancy to improve services. And then there will be an increased demand for energy which can only be met by paying for it, which makes Mexican companies less competitive on the world stage. So, if Mexico’s government doesn’t begin to invest more in the energy sector now and demand increases as the pandemic eases, there will be effects both on price as well as quality of service. So, that’s definitely a concern going forward over the next few years.