Mexico’s central bank (Banxico) has downwardly revised its 2019 and 2020 economic growth forecasts for the country, citing both external factors and uncertainty over the government’s policies at home, as well as concern over the outlook for national oil company PetrÃ³leos Mexicanos (Pemex). 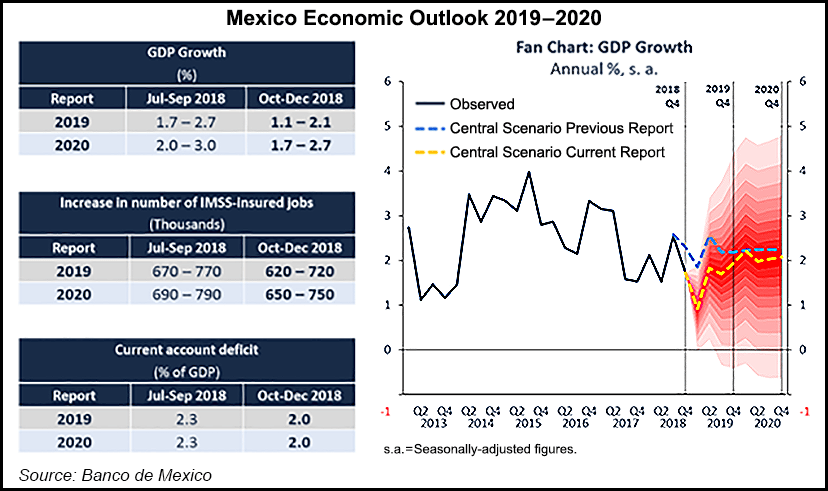 “Internally, we have observed a more pronounced than expected loss of dynamism in global commercial and economic activity, which is expected to influence the evolution of Mexico’s external demand,” Banxico said.

“Externally, in the second half of 2018 and especially at the end of the year, we observed a slowdown that was more pronounced than estimated in the previous report. This led to a lower GDP level at the end of 2018, which at the same time generates a lower growth base for 2019.”

Fitch Ratings in January downgraded Pemex’s debt by two notches, “which will mean higher financing costs for the company,” Banxico said. The downgrade also reflects “the challenges that [Pemex] faces, highlighting its importance for the country’s economy and, in particular, public finances.”

Fitch cited Pemex’s onerous tax burden, inability to stabilize oil and gas production, and diversion of capital allocation from exploration and production (E&P) to the less profitable refining segment, as factors that led to the downgrade.

Pemex on Wednesday reported that it had trimmed its fourth-quarter net loss by 58% year-on-year in peso terms to 125.5 billion pesos ($6.4 billion).

Banxico also cited a continued decline in oil production by Pemex as contributing to the revised 2019 and 2020 growth forecasts.

Banxico said that in 4Q2018, “uncertainty associated with some policies of the new administration” led to high volatility in local financial markets and a depreciation of the Mexican peso against the U.S. dollar, “as well as an increase in long-term interest rates and risk premiums in general.”

Prior to Fitch’s downgrade of Pemex debt in 1Q2019, both Fitch and HR Ratings also revised their ratings outlook for the Mexican sovereign to negative from stable during 4Q2018, Banxico highlighted.

According to local paper El Financiero, Pemex this week instructed industrial gas consumers in central Mexico to reduce their consumption by 27%, “due to distribution problems” at one of Pemex’s gas processing centers in Veracruz state.

Consejo Coordinador Empresarial (CCE) president Pablo CastaÃ±Ã³n told the paper that while the business group’s members expected gas rationing from Pemex in early 2019, “we are feeling it with a bit more intensity than we expected.”

Earlier this month, Mexican employers’ association ConfederaciÃ³n Patronal de la RepÃºblica (Coparmex) publicly stressed the importance of concluding the delayed pipelines in order for natural gas “to arrive where it is needed.”