The Mexican government said its second auction of shallow-water oil and gas lease blocks in the Gulf of Mexico (GOM) fared much better than the first, with three blocks successfully sold to international firms for a combined $3.1 billion over the next 25 years. 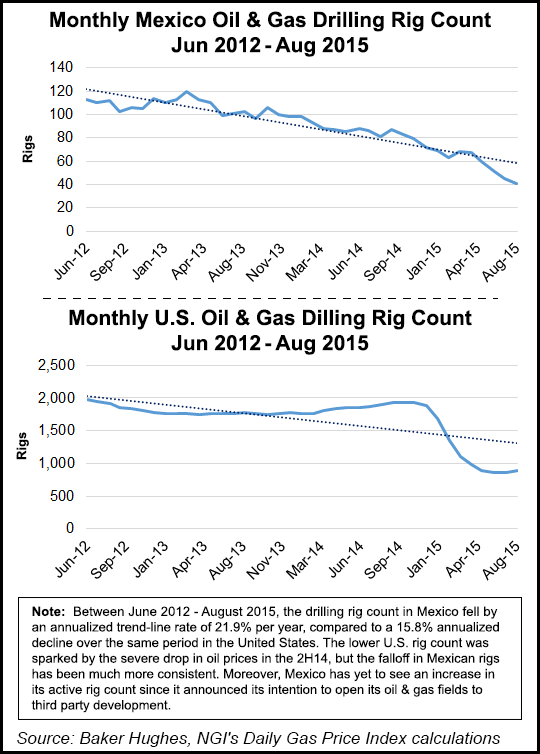 The CNH said it expects production from the three successfully auctioned blocks will average 90,000 boe/d, or 61.8 million boe. Two additional blocks offered at the auction did not sell.

“These results show that despite the challenging environment from low crude oil prices, Mexico presents ideal geologic and contractual conditions for competitive investment over the long term,” the CNH said in a translated statement. “Participation from well-known companies from around the world is clear evidence that our energy reforms as a whole are providing economic stability for our country.”

According to the CNH, Eni offered the Mexican government 83.75% of the profit from oil sales, before taxes and royalties, in its winning bid for the Amoca, Mizton and Tecoalli offshore blocks. Meanwhile, while the Fieldwood/Petrobal consortium pledged 74% for the Ichalkil and Pokoch blocks, and the Argentine companies offered 70% for the Hokchi blocks.

The agency added that the companies will be subject to a base tax rate of 82-90%, but a mechanism was in place to increase it to 85-92% under certain conditions.

“The contract contains a progressive fiscal scheme so that, in case of an increase in oil prices, or if greater volumes of oil and discovered, Mexico shall receive a greater percentage of the profits,” CNH said.

The two groups of blocks that did not sell are Mison and Nak, and Xulum.

Earlier this month, in an effort to generate more excitement for the auction, CNH and the Secretariat of Finance and Public Credit modified the minimum bids for the five blocks (see Daily GPI, Sept. 16). The revised minimum bids range from 30.2% to 35.9% of operating profit.

Last July, nine companies and consortia — fewer than half of the 38 exploration and production companies qualified for the tenders — chose to submit offers for the 14 blocks in the southern GOM (see Daily GPI, July 15). Several blocks received no offers, and other bids failed to meet the minimum threshold for profit sharing with the government. CNH awarded two shallow GOM lease blocks to a consortium of Mexico’s Sierra Oil & Gas, Houston’s Talos Energy LLC and the United Kingdom’s Premier Oil plc.

CNH launched what it has dubbed “Round 1” last December, inviting oil and gas companies to bid on 14 offshore exploratory blocks in the shallow GOM (see Daily GPI, Dec. 11, 2014). The lease sales are part of sweeping energy reforms enacted by President Enrique Pena Nieto.

Between June 2012 and August 2015, the drilling rig count in Mexico fell by an annualized trend-line rate of 21.9% per year, compared to a 15.8% annualized decline over the same period in the United States. The lower U.S. rig count was sparked by the severe drop in oil prices in the second half of 2014, but the falloff in Mexican rigs has been much more consistent. Moreover, Mexico has yet to see an increase in its active rig count since it announced its intention to open its oil and gas fields to third party development.