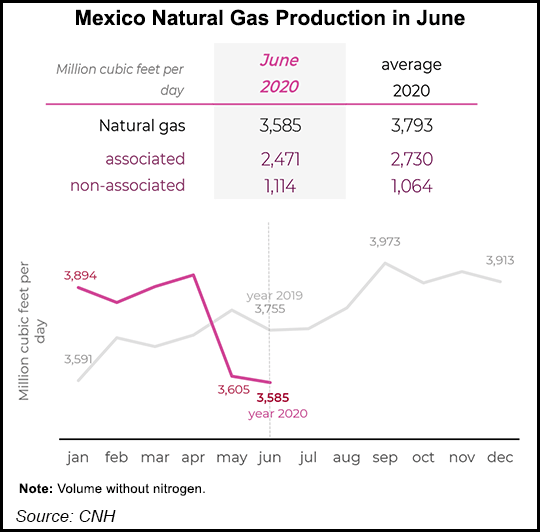 On Tuesday (Aug. 11), CNH approved six shallow water exploration plans submitted by Pemex, all for areas in Campeche Sound in the Gulf of Mexico, requiring combined investment of $461.7 million in a base case scenario, and up to $1.13 billion in an incremental scenario.

The approvals also included one for Pemex to drill an appraisal well at the Quesqui onshore gas and condensate project, which has been highly touted by the government. The well is expected to require $55.3 million of investment.

The plan includes acquiring and processing 3-D seismic data, and drilling up to four appraisal wells, with a possible sidetrack well from one.

The Xaxamani discovery was made at offshore Block 31, which was awarded through CNH’s Round 3.1 bidding process in 2018.

Located in the Burgos Basin, Misión is the largest natural gas-producing contract awarded under Mexico’s market-opening 2013-2014 constitutional energy reform. The area produced 116.5 MMcf/d in June, up from 95.5 MMcf/d in June 2019, CNH data showed.

SMB, a 50/50 joint venture between Tecpetrol SA and Industrial Perforadora de Campeche (IPC), holds a 49% operating interest in the block, while Pemex holds a 51% stake.

In 2018 Pemex and SMB agreed to migrate SMB’s service contract at Misión to an exploration and production (E&P) contract under the framework of the reform. The well is expected to require total investment of $2.9 million for drilling, completion and abandonment, and target prospective natural gas resources that total 18.69 Bcf. The well has an estimated 27% chance of geological success, CNH said.

Last Thursday also saw CNH give Pantera Exploración y Producción 2.2 SAPI de CV permission to drill an appraisal well at onshore Block 7 in Tamaulipas. The well targets a contingent gas resource of 5.1 Bcf, with an estimated 65% chance of geological success, according to CNH.

Pantera, a Canadian-Mexican joint venture, produced 7.22 MMcf/d of gas in June from the blocks it won in Mexico’s Round 2.2 tender, up from 6.2 MMcf/d a year ago.

Natural gas production by private sector-operated projects totaled 231.1 MMcf/d in June, up from 191.8 MMcf/d in the same month a year ago, CNH data show.

Under a curtailment agreement with the Organization of the Petroleum Exporting Countries and its allies, Mexico pledged to slash May and June oil production by 100,000 b/d from a baseline of 1.753 million b/d. However, Mexico declined to extend the cuts through July.The International Energy Agency recently forecast that Mexico’s oil output would likely stay around current levels through 2021, with the natural decline of Pemex legacy fields offsetting any production gains from new developments.