Mexico’s National Hydrocarbons Regulator (CNH) gave a green light to PetrÃ³leos Mexicanos (Pemex) for the exploration and production of the Suuk field last week, the 17th “priority” area approved for development by the state oil and natural gas producer in the past 12 months. 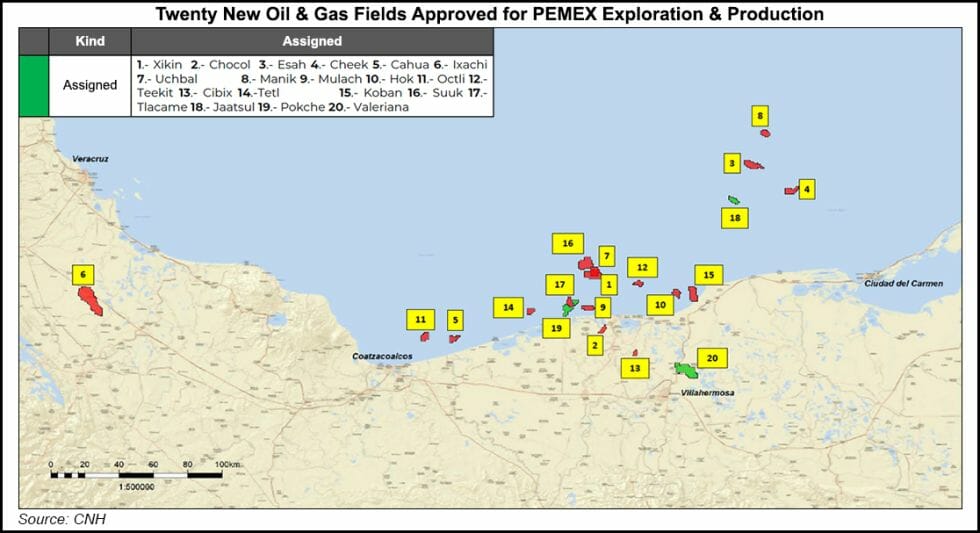 Considered a key field for development by Pemex, the company intends to invest $710 million in the 46,000 square kilometer (28,500-mile) area in the shallow waters of the Gulf of Mexico to produce as much as 61 million barrels of crude and 40 Bcf of gas through 2047, according to a CNH statement. The Pemex plan includes the drilling of six new wells and the company intends to begin production as soon as next year, forecasting 12,000 b/d of new crude output by 2021.

Suuk is one of 20 priority fields Pemex plans to develop as part of its strategy to boost hydrocarbon production in Mexico, where oil and natural gas output has declined for more than a decade. In the past year, the CNH has approved more than $16 billion for hydrocarbon development plans in the 17 Pemex fields. Through the drilling of 119 new wells, the fields are estimated to increase national oil production by 307,000 b/d and gas production by 893 MMcf/d by 2022.

While the commitment to invest more to recover the country’s hydrocarbon output appears positive, industry experts agree the plans might be insufficient to halt plummeting production, both in oil and natural gas.

“At first glance the strategy sounds very positive but it doesn’t incorporate the effect of the depletion of other fields,” Rosanety Barrios, industry expert and former Energy Ministry official, wrote in a message to NGI’s Mexico’s GPI.

Other industry experts agree. In order to halt the production skid, Mexico and Pemex must pick up the pace of hydrocarbon investment, said Gonzalo Monroy, managing director of GMEC and a Mexican industry expert and consultant.

“Suuk at its peak will produce 12,000 b/d, it’s not a game-changer of any kind,” Monroy told NGI’s Mexico’s GPI. “At this pace, it does not change the path” of Mexico’s declining production, he said, adding that Suuk may actually have a negative net present value after taxes. More discoveries similar to the size of the Ixachi field are needed to recover production and meet Pemex’s output goals, he said.

Pemex CEO Octavio Romero Oropeza said in May that Pemex will invest 56 billion pesos, or about $3 billion, in the natural gas-rich Ixachi field in Veracruz with the aim of reaching production of 80,000 b/d of crude and 600 MMcf/d of gas by 2023. The field, considered one of the biggest finds in the past two decades in Mexico with proved, possible and probable reserves of 1.5 billion boe, is already producing 30 MMcf/d of gas and 3,600 b/d of condensate, according to Romero’s comments.

“The large majority of the fields that Pemex has announced focus efforts on recovering oil production,” Rosas told NGI’s Mexico’s GPI. “Few will have an important production of natural gas.”

As a result, Mexico will continue to lean on the United States for natural gas as local output declines. According to CNH forecasts, natural gas imports from its northern neighbor will increase by at least 25% by 2024. Natural gas exports to Mexico from the United States are forecast to reach more than 6.74 Bcf/d in 2024, 25.5% more than 2017 levels of 5.37 Bcf/d, according to estimates from the Energy Ministry.

David Rosales of Talanza Energy, who worked as the Director General of Natural Gas and Petrochemicals at the Energy Ministry during the previous administration, agreed that Pemex’s development plans lack clarity in terms of natural gas.

“All increases should come with a confirmation of how the additional production will be transported to gas processing complexes,” Rosales told NGI’s Mexico’s GPI. “In some cases, there isn’t infrastructure in place to gather it. Also, they should say how much of the production is wet gas and how much is dry gas in accordance with the production forecast. Then petrochemical plants will know how much production will be available.”

Additional natural gas production in Mexico would require more infrastructure and transportation investment, which, at a time when Pemex is short on capital, fails to make economic sense. Importing natural gas from the United States continues to be the best available option, Rosales said.