Mexican natural gas prices held steady in July at just over 74 pesos/gigajoule (GJ) for a third consecutive month, while trading volumes continued climbing to reach a year-to-date high, according to the energy regulator. 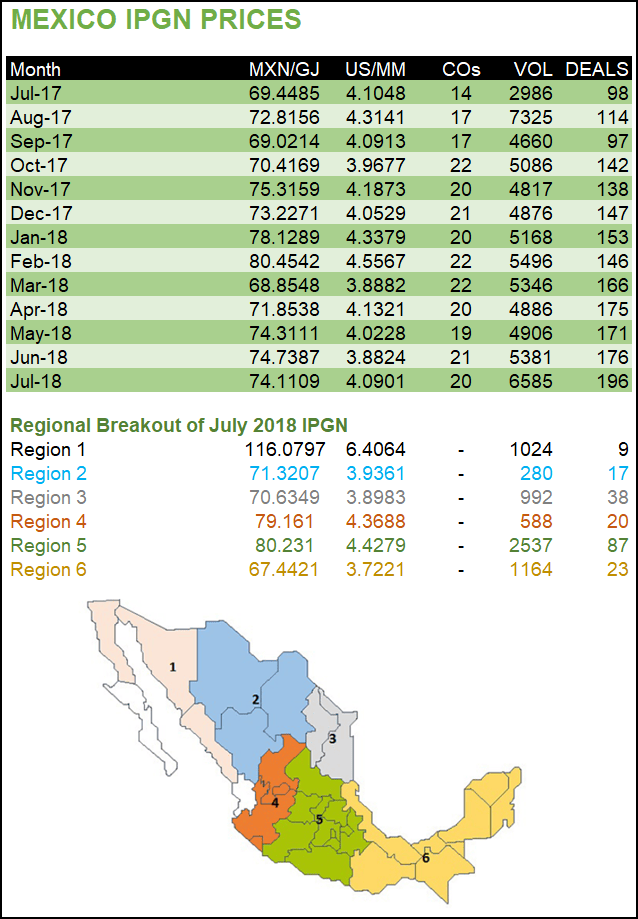 By volume, July trading was up 1.38 Bcf/d from the 5.38 Bcf/d transacted during June. Volumes were also more than double the 2.99 Bcf/d recorded in the year-ago month, although just 14 companies reported 101 deals for that first edition of the index, known as the IPGN.

This year, 20 marketers reported 205 deals in July. The CRE screened out nine atypical trades before calculating the index.

The IPGN is derived from the monthly post-transaction reports that are mandatory for all gas marketers billing trades within Mexico. It shows the average monthly cost of natural gas, combining the price per molecule and transport costs.

The regulator has published the national IPGN for 13 months. At the beginning of this year, it also began issuing a regional breakout of the index showing prices across six trading regions in Mexico.

Most of Mexico’s pipeline imports from the United States flow into Region 3, supplying power and industrial consumers near the border, or continuing farther south to reach demand centers in Region 5, which includes Mexico City. Prices in Region 5 averaged 80.231 pesos/GJ ($4.428/MMbtu) in July, compared to 83.202 pesos/GJ ($4.322/MMbtu) in June.

However, the July index also reported a roughly three-fold increase in trading volumes for southeast Region 6 to 1.16 Bcf/d, compared to .39 Bcf/d in June. The regional price of 67.442 pesos/GJ ($3.722/MMbtu), the index’s lowest for July, also shaved off 17.349 pesos from the June average of 84.791 pesos/GJ ($4.405/MMbtu). At time of publication, the CRE had not responded to inquiries by NGI’s Mexico GPI to verify the regional figures.

Region 6 typically suffers from gas shortages, namely on a pipeline system in the southeast Yucatan Peninsula. However, a pipeline project anchored by a transport agreement with federal power utility Comision Federal de Electricidad (CFE) is expected to help ease those shortfalls after it comes in-service later this year.

The 2.6 Bcf/d Sur de Texas-Tuxpan subsea pipeline would expand the supply of imported gas in Central-east Mexico, displacing domestically produced gas that is currently shipped up from the south and thus boosting the molecule’s availability in the Yucatan.

The marine pipeline extends from the maritime border with the United States to the Mexican port of Tuxpan in Veracruz. It is a joint-venture between TransCanada Corp. and Infraestructura Energetica Nova (IEnova), the Mexico subsidiary of Sempra Energy.

“Offshore construction of the Sur de Texas pipeline was completed in May and continues to progress towards an anticipated in-service date of late 2018,” TransCanada CEO Russ Girling said in a recent call to discuss second quarter results.

The marine pipeline includes a 500 MMcf/d interconnect with the Sistrangas, Mexico’s national transmission system, as well as connections to TransCanada’s existing Tamazunchale pipeline at Naranjos and to the company’s still under-construction Tula pipeline at Tuxpan.

The Tula system would head west to connect with TransCanada’s Villa de Reyes project, also under construction. CFE is the anchor customer for the two pipelines, which are both behind schedule.

“The Villa de Reyes project and the Tula project are anticipated to be in-service in 2019 and 2020 respectively,” Girling said. “While both projects are facing some delays, we continue the work toward finalizing amending agreements for both pipelines with the CFE, and the interim payments are being received in accordance with their respective transportation service agreements.”

TransCanada in July put into service the 670 MMcf/d El Encino-Topolobampo project running through the states of Chihuahua and Sinaloa. The pipeline completes a link from the Permian Basin in West Texas and southeastern New Mexico to gas consumers in northwestern Mexico.

Additional pipeline infrastructure due online later this year should allow more Permian gas to flow south of the border into Mexico’s Pacific Northwest, which includes regions 1 and 2.

CRE reported a July trading volume of 1.02 Bcf/d for Region 1 at an average of 116.08 pesos/GJ ($6.406/MMbtu), the highest regional price reported for the month. This western-most region also includes several interconnects to U.S. pipeline systems on the California border. Prices in Region 2 averaged 71.321 pesos/GJ ($3.936/MMbtu) with a total volume of 280 MMcf/d.

The regulator’s price reports are intended to be indicative and temporary, to be replaced by third-party indexes once the market is able to develop its own. Most transactions in the Mexican gas market are currently priced using U.S. benchmarks like Henry Hub and Houston Ship Channel, plus transport costs.