No Mexican shippers submitted bids at a small auction held Sunday to release capacity on the NET Mexico pipeline, which carries gas from the Agua Dulce hub in South Texas to the Texas border town Rio Grande City.

The tender offered 39 MMcf/d at an exit rate of 37 cents/MMbtu, with one-year contracts running from October 1 through the end of September 2018.

CFEi had originally planned to tender an additional 2.2 Bcf/d of capacity on Sunday, mostly on pipelines connecting the Waha region in West Texas to Chihuahua state in northwestern Mexico. However, on September 4 the company withdrew those pipelines from the bidding, a source at Cenagas told NGI on Monday.

CFEi has not yet indicated whether it would schedule additional auctions at a later date, according to the Cenagas source.

Mexican shippers have so far sat out all auctions for capacity on CFE’s international pipelines. Cenagas previously ran tenders for the same CFE pipelines in West Texas back in July and August. The auctions both offered contracts with one-year terms. In August, the pipeline operator also held three daily auctions for CFE’s NET Mexico capacity.

“The main reason exports from Waha haven’t grown all that much yet is that several downstream pipelines in Mexico are still under construction,” said Pat Rau, NGI director of strategy and research.

“Those pipelines are El Encino-La Laguna (1.5 Bcf/d), La Laguna-Aguascalientes (1.2 Bcf/d), and Villa de Reyes-Aguascalientes-Guadalajara (roughly 0.9 Bcf/d),” he added. “They should come into service at various times, but the entire link will likely not be online until sometime in 2018, assuming no major additional construction delays.”

Cenagas has signed agreements with CFEi and MGS to administer excess capacity on their natural gas import pipelines.

In February, the operator concluded its first cross-border capacity auction for MGS on NET Mexico. It assigned 29% of the 735 MMcf/d on offer to one supplier, BP’s Mexico subsidiary, and two large end-users, Industria del Alcali, and Fabrica de Envases de Vidrio del Potosi. The winners all paid an exit rate of 31 cents/MMBtu. 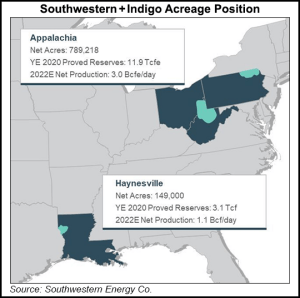 Southwestern Energy Co. this week said it would become the nation’s first exploration and production (E&P) company to certify that its natural gas is responsibly produced from all of its wells across an entire basin. The company reached an agreement for Project Canary to continuously monitor emissions and certify responsibly sourced gas (RSG) from all…