“Widespread uncertainty is impacting energy companies in Mexico on a daily basis,” David Enríquez, senior partner at the Mexico City-based law firm Goodrich, Riquelme y Asociados, told NGI’s Mexico GPI. “Some companies don’t even know if they will continue to exist in the next few months or if they’re going to have a permit to continue to operate, or if they’ll be able to pay employees’ salaries in six months or a year.” 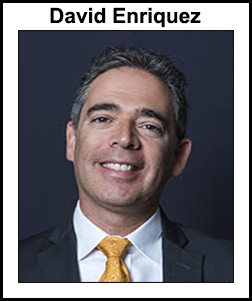 He added: “Practically all of them have some form of credit obligations to pay, and they don’t know at this time if they’ll be able to make their payments. There is enormous uncertainty across the sector.”

Enríquez is one of the most distinguished and recognized figures in the Mexican energy industry, and is regularly ranked as one of the top lawyers in Latin America by the Legal 500, including for 2022. He has been with Goodrich since 2000 and specializes in energy, infrastructure, and maritime sectors, from both transactional and regulatory perspectives. His practice also includes commercial and investment arbitration related to those industries.

In addition to his work at Goodrich Riquelme, Enríquez is a member of the International Bar Association, the Institute for Energy Law and the Association of International Petroleum Negotiators. He has been a law lecturer at the Instituto Tecnológico Autónomo de México (ITAM) and has authored numerous articles and nine books on Maritime Law, International Economic Law and Energy Law.

Enríquez holds a PhD in law from the Universidad Panamericana in Mexico City, a diploma in International Economic Policy from the London School of Economics, a master’s degree in Maritime Law from Southampton University in England and the Instituto Europeo de Estudios Marítimos in Gijón, Spain and a bachelors from the Universidad Panamericana in Guadalajara.

NGI: What do you expect and what is your outlook on the Mexican energy sector in 2022?

Enríquez: The outlook for this year is really one of pervasive uncertainty, practically across the board in the sector. One on hand, there is all of the noise and uncertainty around the regulatory changes and legal issues that could arise as a result of these changes. At the same time, there is uncertainty and concern about how the Supreme Court will rule in regards to the Electricity Industry Law (LIE) at a time when a minister, José Fernando Franco González-Salas, has just left the court. It was hoped that the plenary of the Court would vote on the constitutionality of the proposal in November before he left his posting, but for some reason — I would say a strange reason — that didn’t happen. It seemed like all the elements were there for a vote to happen and it didn’t, perhaps due to pressure of some type of outside factor. Now, the fate of the bill will fall to the new Minister of the Supreme Court, Loretta Ortiz, who was nominated by President López Obrador. So, across the board in the sector, and particularly in how the Supreme Court will proceed with the LIE, there is widespread uncertainty.

The fact is that the LIE, which has been subjected to various legal injunctions and blocked by courts and magistrates in some form during the past two years, will now all be decided by the ruling by the Supreme Court. The fate of the repeated efforts to block elements of the proposed law, the constitutional controversies it caused and concerns of the industry will be decided by a general Supreme Court ruling. So, it’s very important to see what Minister Ortiz proposes in the next few months. I would say this is the first pillar of uncertainty.

NGI: I’d imagine the electricity reform proposal is also a primary element of uncertainty in the sector?

Enríquez: The proposal to reform the constitution as part of the electricity reform is of course the second pillar of uncertainty in the industry. As is well known, the proposal has been opposed by various organizations, companies, NGOs and members of the sector, and is extremely controversial as it seeks to modify the constitution.

The uncertainty lies in how the proposal might be modified in order to gain approval. Members of the PRI, for example, haven’t shown uniformity in how they might vote. Some have said they’d never vote to approve the proposal, while others have said they’re open to debate. What I think is the most delicate, and where the uncertainty really lies, is that at the end of the day, politicians want to have something they can point to that they accomplished, as if it was an award or a way to toot their own horn. Even if it’s not really not an accomplishment, politicians want something to validate their time in office.

What I think is going to happen is that it isn’t going to be a black and white issue and I think modifications will be made to the constitutional reform proposal. But I think those modifications, instead of adding certainty to the proposal, will do the exact opposite. I think that what the government is looking to do is a strategy of divide and conquer, in that instead of having one large battle or debate, they will seek small victories and try to convince some senators to reconsider their position.

I think they will do this by modifying the text of the proposal to be more ambiguous so that it appears less polemic and controversial on paper. And, if they succeed in passing it, the secondary laws, which will be structured afterwards, will then allow Morena to implement whatever changes they’d like in the sector. Passing an ambiguous text that reforms the constitution in 2022 could be devastating for the sector for the rest of the administration. While this year would generate uncertainty in the sector, the following years and the implementation of the secondary laws could be potentially even more damaging for the industry.

NGI: Among your clients and energy companies that you work with, how are they feeling about the state of the Mexican energy sector currently?

Enríquez: They’re very worried and the widespread uncertainty impacts them on a daily basis. While you and I can identify the uncertainty in the sector, for some companies, they don’t even know if they will continue to exist in the next few months. They don’t know if they’re going to have a permit to continue to operate or if they’ll be able to pay employees’ salaries in six months or a year. Practically all of them have some form of credit obligations to pay, and they don’t know at this time if they’ll be able to make their payments. The uncertainty abounds.

Beyond the electricity market, some oil product transportation terminal, supply and storage terminal projects that are very advanced and have required significant investment are now facing radical changes in the rules of the game. And if you’ve made a carefully calculated investment based on a 20-year permit that was awarded, for example, the changes in regulation now put all of that in jeopardy. As a result, the financial backers of the project might reconsider their support given that the risk of a failure to pay is much higher. So, the uncertainty levels are enormous and there is anxiety across the sector.

NGI: There were blackouts and power outages throughout Mexico and obviously Texas in the winter months of 2021. Do you think Mexico, given a lack of transmission lines and the reliance on the U.S. for natural gas, is at risk of more power outages in the next few months?

Enríquez: I think this is an issue with multiple factors. One problem is the lack of transmission lines that is a severe issue that the government isn’t addressing. Electricity transmission is the obligation of the government and an inability to distribute power efficiently puts sectors, such as the export sectors, at risk if there is limited supply. The same applies for the industrial sectors of Mexico, such as automotive, which have a very high demand for electricity in their production processes. So, if supply is affected, this would obviously result in bottlenecks and impact the country’s overall economy.

If there’s not a way to attend to all of the electricity needs of Mexico’s productive sectors, then we’re looking at a sort of perfect storm of potential service and supply chain interruptions. This isn’t Mexico-specific, but the lack of transmission in the country could really make for a complicated situation in the next few months if ample power options aren’t available.