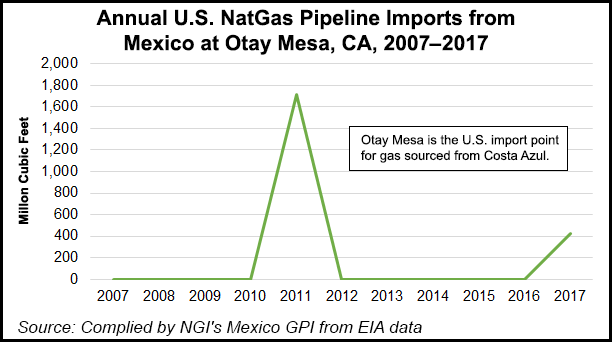 “We’re limiting the people we’re talking with to only very serious parties, so that’s the time frame for the smaller-scale project,” said Simoes, president of Sempra LNG & Midstream.

Sempra and partners have a liquefaction export facility under construction at an existing import terminal at Cameron, LA, and the company has proposed building another export facility on a site it owns at Port Arthur near Houston.

The smaller-scale option for Mexico was discussed by IEnova management earlier this year during the 4Q2017 conference call in February, but Simoes said the company is “not ready to announce anything definitive” at this time. He said both the small- and large-scale options are still on the table.

Sempra executives have been talking for at least four years about LNG exports from the Mexican LNG import facility site, which is on the Pacific Coast in Baja California near Ensenada.

Over the last three years IEnova has obtained permits for a large-scale facility from various Mexican authorities, said Simoes. He noted that now company officials are working to revise those permits to possibly accommodate a smaller-scale liquefaction project.

“There are different time tables for execution and different strategies, and we’re assessing both,” he said.

The lightly used 10-year-old regasification facility is capable of handling 1 Bcf of deliveries, but it has never operated at that peak level, although volumes and exact numbers of shipments are confidential.

Units of Royal Dutch Shell plc and Russia’s Gazprom own half of the capacity at the terminal. The last cargoes to the Shell/Gazprom portion were reportedly in mid-2016.

Sempra’s 50% capacity is contracted between its LNG unit and IEnova for supplies that Sempra’s LNG unit buys from Indonesia’s Tangguh PSC. Supply has averaged about three cargoes annually, according to Simoes.

Another advantage to a smaller-scale export project is that it would only require Sempra/IEnova altering their half of the facility, leaving untouched the Shell/Gazprom half that is tied to a 20-year supply contract that does not expire until 2028. A larger scale export project would have to include the Shell and Gazprom units, Simoes said.

Given the terminal’s location as the only West Coast LNG facility now built in North America, interest in the site among the LNG-importing countries in the Pacific Rim has been “significant,” Simoes said.

“We actually submitted applications to all of the proper agencies in Mexico and received the major permits for a large-scale project at the end of last year.”

Three years ago, IEnova signed a deal with Mexico’s state-owned Petroleos Mexicanos to pursue development of a LNG liquefaction project at the Costa Azul site.

Under the smaller scale option, the terminal’s ability to import gas for existing customers could be maintained along side the smaller export facility, Simoes said.

“That would bring LNG exports to market through the Mexican facility in the 2023 time frame,” he said. Unlike a larger-scale project, no new transmission pipeline would be required.