With weather systems drenching much of the United States early in the week, and scorching heat continuing in other areas of the country, weekly prices were a mixed bag for the June 24-27 period. (Deals transacted on Friday were for delivery July 1 and not included in NGI’s Weekly Average.) Individual gains and losses were mostly in the single digits, leaving the NGI Spot Gas Weekly Avg. just a half-cent higher $1.935. 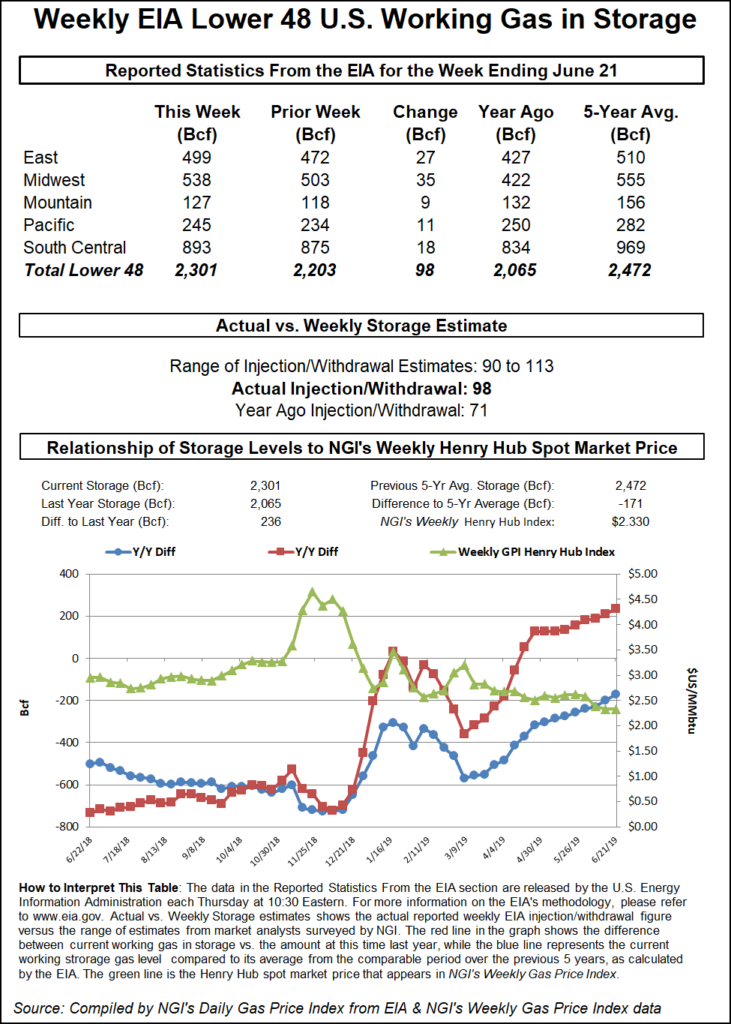 Despite the small overall changes week/week for most market hubs, a handful posted more notable swings as pipeline maintenance restricted gas flows and led to increased volatility. In the Rockies, points along the El Paso Natural Gas system jumped more than a dime on the week as unplanned repairs were needed at a San Juan area compressor station. El Paso San Juan prices averaged 17.5 cents higher on the week at $1.665.

The strength in the Rockies helped lift other El Paso points in West Texas, where El Paso Permian rose 18 cents to average 29 cents.

Despite a dip at the end of the week, Permian Basin prices could be in for further upside as pipeline exports may soon surge, according to Genscape Inc. After pipeline exports to Mexico averaged just shy of 5.0 Bcf/d in 1Q2019, a combination of pipeline maintenance and mild weather-driven demand cut exports south of the border to 4.7 Bcf/d in 2Q2019.

However, seasonal uptick in summer cooling demand in Mexico and the recent completion of the 2.6 Bcf/d Sur de Texas-Tuxpan pipeline could lead to additional exports for the rest of the summer, according to Genscape.

When those additional flows may begin in any sustained fashion is unclear, however, after word spread that flows had been halted on Sur de Texas over a spat between Mexico’s Comision Federal de Electricidad (CFE) and Infraestructura Energética Nova (IEnova). The pipeline had been in the commissioning phase, flowing as high as 0.4 Bcf/d this week.

IEnova indicated earlier in the week that it had received an arbitration request from the CFE over issues related to force majeure clauses in the pipeline’s contract. The arbitration request, however, in “no way impedes the CFE from filing the certification of acceptance” which would allow for the delivery of gas to CFE, IEnova stated.

The $2 billion pipeline was developed by IEnova in conjunction with TC Energy Corp.

IEnova said it is working with the CFE to resolve the issue. CFE General Director Manuel Bartlett has said the company seeks to renegotiate the take-or-pay natural gas transport contracts with TC, IEnova and other developers of pipeline projects, as the contracts are onerous and unfair to the state-controlled company.

The marine pipeline’s recently activated electronic bulletin board showed that it had received injections of 138 MMcf on June 18 and 351 MMcf on June 19, but it had not received gas since.

Market analysts are keeping a close on developments, as the increased flows are a needed outlet for an oversupplied U.S. market. Tudor, Pickering, Holt & Associates was modeling 0.7 Bcf/d of incremental Mexican exports by the end of June, meaning every week this drags on, another 5 Bcf is added to storage versus its base-case assumptions.

“Without any clarity on the issue, it’s too early to make a call but for illustrative purposes, if flows remain idle over the next two months, another roughly 50 Bcf would be added to storage” and the firm’s projected end-of-August inventories would move to 2% below the five-year average versus 4% below.

Meanwhile, temperatures were starting to rise across the eastern half of the country this week, with Genscape meteorologists forecasting total Lower 48 population-weighted cooling degree days (CDD) to climb daily through Saturday, reaching a peak of 128 CDDs, about 17 CDDs above seasonal norms. Accordingly, Genscape’s Daily Macro Supply & Demand report showed demand rising to a high of 73.8 Bcf/d by Friday.

On the pipeline front, Texas Eastern Transmission (Tetco) indicated that pipeline integrity investigations on its Line 15 between the Egypt to Barton compressor stations in Texas is now expected to last until next Wednesday (July 3). During these investigations, Tetco will be required to lower north-to-south capacity through Barton to about 1.253 million Dth/d.

Midcontinent prices also were boosted by pipeline work in the region. NGPL Midcontinent rose 32 cents on the week to average $1.79, although several other market hubs notched double-digit gains as well.

Over in the Midwest, prices were lower week/week, even as conditions got progressing warmer throughout the week. Forecasts had called for highs to reach the lower 90s in Chicago by Friday. Chicago Citygate slipped 3.5 cents to $2.08.

After an incredibly mild summer to date led to a string of triple-digit storage injections that improved a once dismal storage picture, the market on Thursday finally saw signs of tighter supply/demand balances. The Energy Information Administration (EIA) reported a 98 Bcf injection into inventories for the week ending June 21.

The build was well within the range of expectations but fell a couple Bcf shy of consensus. However, it was far above both last year’s 71 Bcf injection and the five-year 70 Bcf average.

“The market does appear to be tightening as June gas production was down slightly, power burn has the potential to come in well above expectations given spot prices, and Mexico and liquefied natural gas (LNG) exports continue to ramp as new projects enter service, all of which could help push injections to more normalized levels as we progress through the summer,” Jefferies Equity Research said.

There were no major surprises in the EIA data. A 35 Bcf injection was reported in the Midwest, and 27 Bcf was added in the East. The Pacific injected 11 Bcf, while stocks in the Mountain region rose by 9 Bcf. The South Central region reported an 18 Bcf injection, including a 1 Bcf withdrawal in salt facilities and an 18 Bcf build into nonsalts.

Including this most recent report, the last three weeks have averaged about 1.0 Bcf/d loose versus the five-year average, accounting for both weather and seasonality, according to Genscape. Compared to the first three weeks of summer (ending the week of April 18), this recent 1.0 Bcf/d of looseness is almost 4 Bcf/d tighter than early season prints. During that time, production growth has been minimal while net exports have increased.

“If prices stay in the $2.30 range or lower, and if liquefied natural gas exports do not back off soon, we have the potential to see some stats in July that actually appear a bit tighter than the five-year average,” Genscape senior natural gas analyst Eric Fell said.

Of course, in this weather-dominated market, all eyes are also focused on an impending heat wave moving across the country. A small cooler adjustment was made to the 11- to 15-day forecast, a trend supported by the overnight runs.

This was something Bespoke Weather Services noted was a risk once beyond the first week of July, at least cooling the pattern back toward normal. The firm still sees some rather impressive heat to go through in the near term across the Midwest and East, and down into the Southeast, with the upcoming week easily the hottest it has seen so far.

Widespread daytime highs in the 90s were expected, although the actual hottest days Bespoke sees currently lie around the July Fourth holiday period, “mitigating some of the impact we might otherwise see if the best heat was on a typical day. The El Niño state has definitely weakened, and it is no coincidence that has occurred as the pattern shifts hotter, just as we saw in May.”

Bespoke does not believe the El Niño completely dies off, however, and therefore expects the near-term above-normal heat should not “lock in.”

The clouds cleared and the sun was set to continue blazing over most of the United States for the early part of the week, with the hottest weather still a couple of days out, according to forecasts.

Highs in the 90s were expected to stretch over a significant portion of the country, including from Chicago to New York City. Although there was expected to some minor cooling across the Northeast on Monday, temperatures were expected to hold near 90 over the southern Great Lakes and Ohio Valley, according to NatGasWeather.

Texas and the South could also see some minor cooling on Monday thanks to some thunderstorms set to stall over the area. “Where conditions will be most uncomfortable is across the Southeast and up the Mid-Atlantic Coast, where highs into the mid-90s are expected to drive regionally strong demand,” NatGasWeather said.

The generally hot weather pattern lifted cash prices across most of the county. Interestingly, the most pronounced gains occurred in the far milder West, which was the only region expected to see below-average temperatures.

The typically volatile SoCal Citygate jumped 56.5 cents to $2.335, although most other market hubs in California rose less than a dime.

Points along El Paso Natural Gas in the Rockies shot up more than 20 cents as maintenance continued on a portion of the system in San Juan. El Paso Bondad rocketed 30.5 cents higher to $1.725.

With gas flows unable to move out of San Juan, backing up flows in the West Texas portion of the Permian Basin, pricing continued to soften there. Waha fell 15.5 cents to average minus 16 cents, although some deals were seen as low as minus 42 cents.

The shifting gas flows were reflected in pricing in parts of the Midcontinent as well. OGT spot gas plunged 18.0 cents to $1.65.

Dramatic price shifts were harder to come by in most other areas of the United States. Midwest cash rose less than a nickel across the region, while only slightly stronger gains were seen at a handful of points in Louisiana and across the Southeast.

Prices also hardly budged in Appalachia and the Northeast, as an expected storm was set to offer a brief reprieve from the heat. Algonquin Citygate rose only 2.0 cents to $2.120.

“Since then, it has nominated a new max of 153 MMcf/d on June 25, roughly 50 MMcf/d higher than its previous max,” Genscape analyst Josh Garcia said.

The new unit is expected to help alleviate some of the lost generation from the 680 MW Pilgrim Nuclear Station in Plymouth, MA, which retired on June 1.