A unit of Bismarck-based MDU Resources Group Inc. said Monday it plans to build a $50 million natural gas transmission pipeline to bring gas supplies to areas of eastern North Dakota and western Minnesota. An open season for the project will run through July 15. 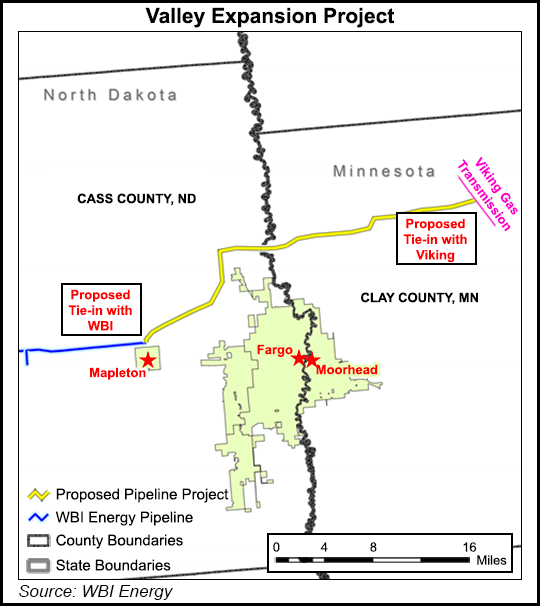 MDU’s WBI Energy Inc. is seeking binding commitments for its 38-mile, 16-inch diameter Valley Expansion Project. The company has received “significant interest” from its customers in the region and that has driven plans for the project, a spokesperson said. There are limitations on current pipeline infrastructure in the region, according to North Dakota officials.

The pipeline would connect the existing WBI transmission pipeline system at Mapleton, ND, in Cass County to Viking Gas Transmission’s gas pipeline system at Felton, MN, in Clay County, following an east-west route running north of Fargo, on the Minnesota-North Dakota border. A new 2,000-hp compressor station would be built near Mapleton, and a new measurement station would be erected near Felton, MN, along Viking’s system.

Under the new link, WBI would receive natural gas coming from the east through the Viking system, which is part of Tulsa-based Oneok Partners, serving customers in Minnesota, North Dakota and Wisconsin. The new line will address what has been an underserved natural gas area in the region.

State and utility officials have long promoted the need for more natural gas for the Red River Valley, particularly for industrial and commercial growth in the region. A preliminary route has been selected for the new pipeline, and MDU officials said survey work is expected to start this summer. Eventually there will be a Federal Energy Regulatory Commission pre-filing.

Assuming all needed regulatory and other approvals come in a timely manner, WBI projects a Nov. 1, 2018 start date for the Valley Expansion project. “The pipeline, from permitting through construction/operation, will be under FERC’s jurisdiction, similar to the existing WBI pipeline system,” said a company spokesperson.

Along with boosting opportunities for industrial/commercial growth in the Red River Valley, the expansion project promises “to greatly enhance supply security for existing end-users in eastern North Dakota and western Minnesota,” said MDU Resources CEO David Goodin. WBI CEO Martin Fritz added that the project is part of his unit’s push for more growth and reliability for natural gas in the region (see Shale Daily, May 14, 2015).

“From the Valley Expansion Project in the east to our multiple system expansions this year in northwestern North Dakota, our team is committed to meeting the needs of our customers through increased natural gas transportation capacity,” Fritz said. Last year, WBI dropped plans for a major new gas pipeline in North Dakota when a long-standing proposal for a major new fertilizer plant was dropped by its Minnesota-based backers (see Shale Daily, Oct. 30, 2015).

A past backer of bringing more gas to the Red River Valley area, North Dakota Gov. Jack Dalrymple called the project “frankly a long time in coming,” while lauding WBI. “Whether it’s industrial and commercial facilities, new gas-fired electric generation plants or even taps to local farmers for drying grain, I expect we will see numerous benefits from this expansion in this important area of our state.”