While continuing to cash in on the robust oil and natural growth in its home-based Bakken Shale play, Bismarck, ND-based MDU Resources Group’s exploration/production (E&P) unit looks to expand elsewhere with its increased activity in Utah’s Paradox Basin and an as-yet-unspecified third major oil play. 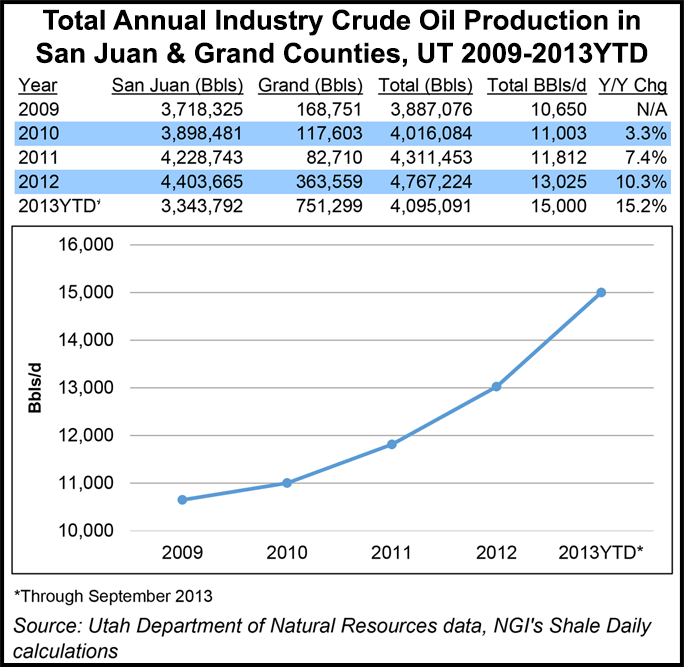 CEO David Goodin and other senior executives Tuesday reported sharply increased profits for the past calendar year, during an earnings conference call.

They touted the Paradox as a new potential high-growth area this year and the prospect for announcing a third play as the energy utility holding company continues to focus more on oil and decrease its natural gas investments.

MDU’s E&P unit, Fidelity Exploration & Production Co., had a 30% increase in oil production in 2013, with its production over the past two years in up 77%, according to Kent Wells, Fidelity CEO. Fidelity has a $130 million investment in the Bakken planned for this year, continuing its two rigs operating with plans for drilling 12 to 15 new wells this year.

“The Bakken continues to drive our E&P group,” said Goodin, but he added that with each new quarter last year, “the Paradox [in Utah] took on increasing significance for us, and we see that continuing.” MDU has been encouraged since early results in 2012 in the Paradox, he said.

“That was largely based on the success of one of two wells, and that accounted for only 7% of our well production for the year, but last year production from the play represented 17% of overall oil production. And in the fourth quarter, the Paradox moved up to 21%.” MDU added 35,000 net acres in the Paradox last year, bringing its total now to 130,000 acres, and it added a second drilling rig in December.

In the context of emphasizing MDU’s strategy to focus on oil and de-emphasize natural gas plays, Goodin said the company “continues to focus on adding a third oil play, and we’ll announce any progress if and when agreements have been signed.” The company expects to invest $440 million on overall E&P activity in 2014.

During the conference call question-and-answer session, several analysts sought more specifics on the potential new oil play, but both Goodin and Wells refused to add any detail, including whether the deal would be made this year.