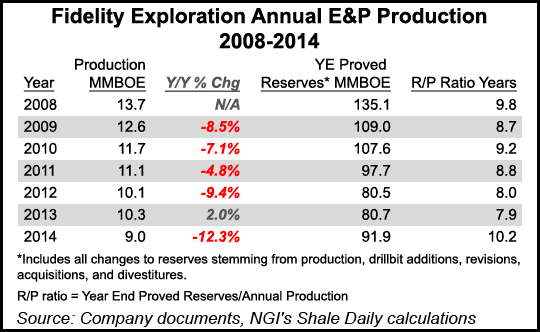 “Until such time as we sell Fidelity, we are maximizing its value,” Goodin told analysts during a quarterly earnings conference call. He said the company is focused on lowering its capital cost structure in the E&P space, following 25% reductions in its administrative and general expenses. “We have laid down our rigs and look to further reduce our cost structure before we begin to drill again later this year.”

The CEO told analysts that “plans at present do not include a sale of Fidelity in 2015 and basically beyond that period. We’ll continue to monitor market conditions until we feel the timing is right for selling the business.

“That is why we’re providing greater clarity of our plans for this year, but beyond that, we’ll continue to provide updates as to the timing for marketing the business.”

Fidelity CEO Kent Wells, who is retiring at the end of this month, said that once the E&P’s cost structure is where MDU wants it to be and the business environment is considered favorable based on criteria that includes oil prices, the E&P would be marketed.

There’s no intent to sell Fidelity in a piecemeal fashion, Goodin added.

Fidelity President Pat O’Bryan is to become CEO on March 1.

Fidelity’s capital expenditure budget is set at $111 million this year, with investments minimized in the first half of the year to become “better aligned” with the low commodity price environment, Goodin said. “We anticipate resuming drilling in the second half of the year as long as our return goals are met.”

MDU plans to invest about $3.9 billion in capital projects over the next five years, Goodin noted, “and our strategic decision to market our exploration and production business at the appropriate time in the future, I am confident we are well positioned to produce significant long-term value for shareholders with a lower overall business risk profile.”

“This year our E&P expects to be generally self-funding, operating at or below the cash flows it generates,” said Goodin.

A slight increase in oil production last year was led by a 25% jump in Paradox Basin production. Natural gas and natural gas liquids production were both down last year as a result of the Bakken Shale asset sales, he said.