Bismarck, ND-based MDU Resources Group is considering a sale of its interest in a new Bakken Shale-based diesel refinery in North Dakota that began operations last year only to hit the wall in the first quarter due to depressed drilling activity. 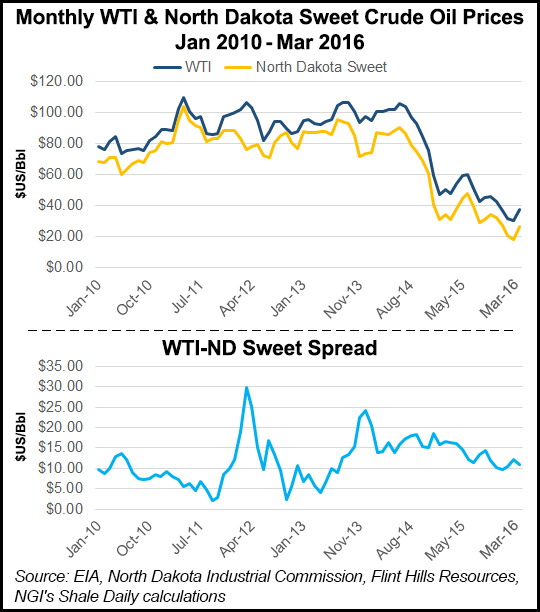 Goodin said since opening in early May 2015, market conditions have “considerably deteriorated,” including a narrowing of the Bakken-WTI spread, which increases the refinery’s costs for oil feedstock at a time when the low-price commodity environment has beaten down demand for diesel and naphtha.

With these headwinds, Goodin said the company has lowered its operations to an average of about 75% capacity, and the 20,000 b/d facility is currently producing 15,000-16,000 b/d. That is a reduction from previous plans of operating the refinery at about 90% this year, he said.

“In light of these market conditions, we are assessing various options regarding our ownership interest,” Goodin told analysts on a conference call in which MDU Resources reported earnings of $24.7 million (13 cents/share), compared to a loss of $306.1 million (minus $1.57) for the same period last year before it sold its oil/natural gas exploration and production unit that experienced a large non-cash writedown due to the commodity price collapse impact on reserve values.

Martin Fritz, CEO at MDU’s pipeline and refinery unit, WBI Energy, said the market for both naphtha and diesel is “very depressed,” so it makes more economic sense to run at a lower volume, “but the lowest we can run without causing problems is about 14,000-15,000 b/d.” While the 1Q2016 results were in line with expectations, he said the demand kept plummeting during the quarter as producers continued to lay down rigs.

“By last night’s count, we were downs to 26 rigs [in the Bakken], and the diesel side of the refinery is very Bakken-dependent,” Fritz said, adding in response to another analyst’s question that the other side of his business — midstream pipelines and processing — has picked up considerably, particularly for moving product to storage.

In response to a question specifically asking if MDU is looking to sell its part of the refinery, Fritz said “at this point we are not in a position to give you any clear direction.” He said the operations are smooth and costs are being reduced, “but we’re in the process of working with all of our vendors to see if we can get cash flow-even.”

MDU’s facility, the first new refinery opened in the United States in several decades, was touted as a chance for the Bakken to begin producing badly needed diesel for the state’s oil/natural gas and agricultural operations, along with several feedstocks.

Elected and industry officials who attended the refinery opening last year cited the $350 million facility for its economic and energy advantages to the state as it continued to keep up with its record-setting oil/gas production despite lower rig counts due to low crude prices (see Shale Daily, July 13, 2015).

Originally slated to start operations late in 2014, Dakota Prairie Refinery was built by MDU’s pipeline construction unit, WBI Energy, and a unit of Calumet, in response to demand for diesel in North Dakota (59,000 b/d average), where in the past only about one-third of that demand (22,000 b/d) had been refined in the state.

At one time,Goodin said the company considered pursuing a second new refinery in the Bakken, given “a decidedly under-supplied North Dakota market.” Goodin said MDU had identified a potential site and had begun permitting work (see Shale Daily, Nov. 5, 2014).