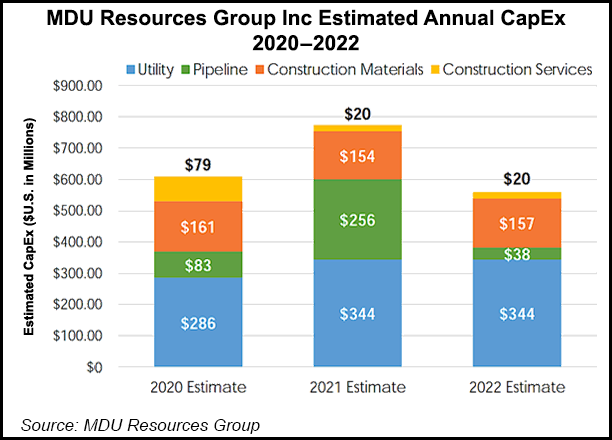 MDU Resources Group Inc.’s utility operations, spread across eight states, as well as a pipeline business serving the the Rockies and Bakken Shale, reported increased profits during the second quarter from a year ago, beating back Covid-19’s negative impacts by using geographic diversity and a mid-size market focus.

CEO David Goodin said the Bismarck, ND-based utility holding company performed well in the quarter, posting record revenues and earnings in the construction businesses and strong results in its regulated energy delivery businesses. The construction materials and services units also built up a near-record level of almost $2.2 billion in backlog.

As a sign it is on solid footing, MDU at the end of June reached record employment levels, with 15,247 employees, nearly 1,000 more than at the same time last year, Goodin noted.

Over the next three years, MDU is planning to add more than 500 MMcf/d of natural gas pipeline capacity, with four projects to serve Bakken producers in North Dakota.

“For the expansion project in western North Dakota, we now expect construction to begin early in 2021,” Goodin said. “The revised forecast for Bakken natural gas production showed slower growth, so we have decided to decrease the initial design capacity of this project to now 250 MMcf/d simply by reducing compression, which in turn reduces the anticipated capital expenditures for the project.

“The size of the pipe used for this project will remain the same, allowing us to scale up capacity by increasing compression as Bakken production rebounds. We expect this project to be in service in late 2021.”

WBI President Trevor Hastings drilled down on the changes in the North Bakken expansion, noting “the primary challenge that we ran into was the Montana U.S. District Court ruling on the Keystone XL project,” which removed the Nationwide Permit 12 (NWP 12) for new gas and oil pipelines.

In early July, the U.S. Supreme Court overturned the ruling. The Montana court’s ruling resulted in a stay on Keystone, but it opened up the use of NWP 12’s streamlined permitting to new oil and gas pipelines.

“So from that standpoint, it put back in play that as an option, which is the permit we typically use on our projects,” Hastings said. “Our timeline calls for making our permit filing in the next one to two months probably. And then really, from that point, our FERC approval is the next main approval or certificate to proceed, and that should be in early 2021 allowing construction to begin sometime in the spring.”