Monday, April 10, is the final day of the Maryland General Assembly session, the latter part of which has been dominated by debate over electric rate hikes at Constellation’s Baltimore Gas & Electric (BG&E) utility. Last week Constellation CEO Mayo A. Shattuck III wrote a letter to employees in which he suggested the merger might be called off should the legislation go forward.

“In addition to the rate issue, the legislature has passed a number of bills that would unfairly — and, we believe, illegally — attempt to extract hundreds of millions of dollars from Constellation Energy and BGE, and require legislative approval of the merger,” Shattuck wrote. “These proposals would put unreasonable strains on our balance sheet and threaten the merger, but there is an even more important issue at stake.

“This means we may be forced, if certain legislation stands, to undertake a legal challenge. From our perspective, any legislative ‘taking’ of our property would be unconstitutional.”

One of the bills would have given lawmakers a say over the proposed merger through creation of an office of special counsel to investigate the deal. Another piece of legislation would have prevented the merger from moving forward unless/until Constellation returned $528 million in transition costs to customers of is utility, BG&E. A third piece of legislation would have given lawmakers the ability to fire existing members of the state’s PSC and appoint four of the five members themselves.

An FPL spokesman said the company had no response to news of the vetoes. 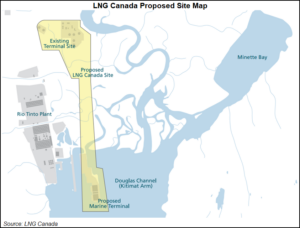 Enbridge Inc. has won a contest with TC Energy Corp. to collect high-volume natural gas pipeline flows for the Royal Dutch Shell plc-led LNG Canada export terminal under construction in northeastern British Columbia (BC). Disclosure of the commercial coup surfaced in a procedural dispute before the Canada Energy Regulator (CER) between Enbridge’s Westcoast network in…