Republican Maryland Gov. Larry Hogan this week signed the state’s proposed hydraulic fracturing (fracking) ban into law, a move that was expected after he reversed his position to come out against the practice in a pronouncement last month. 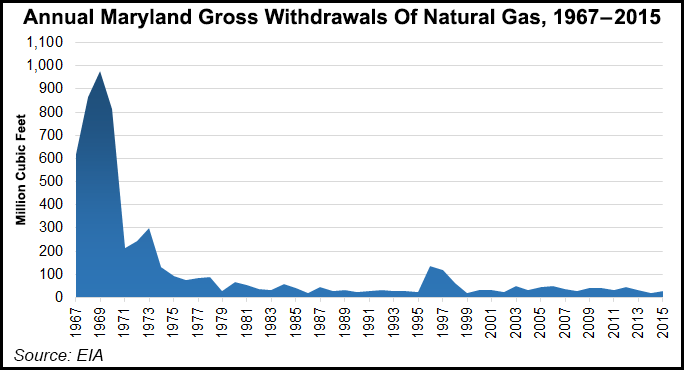 As part of a bill signing ceremony Tuesday, Hogan put pen to paper on HB 1325, a bill that passed by a 97-40 margin in Maryland’s House of Delegates last month.

The ban indefinitely extends a previously passed statewide moratorium on fracking. While the moratorium was in place, Maryland’s Department of the Environment developed and submitted a set of proposed fracking regulations, but state lawmakers sought to delay implementing them.

“Because of Maryland’s unique position in the country and because of our wealth of natural resources, our administration has concluded that the potential environmental risks of fracking simply outweigh any potential benefits,” Hogan said last month, days after the House vote on HB 1325.

Only two western panhandle counties in Maryland — Allegany and Garrett — overlie the Marcellus Shale. They are not heavily populated and don’t have many votes in the state legislature. In an interview with The Baltimore Sunas a then-candidate for governor, Hogan had cited economic struggles in Western Maryland as a reason for supporting fracking in the state.

Industry advocacy group Energy In Depth Marcellus (EID) this week criticized Hogan for changing his position, suggesting the governor played politics at the expense of his Western Maryland constituents.

“Hogan’s decision actually appears driven by a desire to score political points with the considerable environmental contingent in the state,” EID’s Nicole Jacobs wrote in a blog post shortly after the bill was signed. “In doing so, Hogan has silenced the voices of the people that should matter the most — residents of Garrett and Allegheny counties, where fracking would have occurred in Maryland, and where the strongest support for the practice exists.”

She added, “The Maryland legislature and Governor Hogan chose anti-fracking rhetoric and ‘alternative facts’ over science, and politics over facts, cutting off the opportunity for Western Marylanders to see thousands of jobs and millions of dollars in output and wages.

“It’s been more than two years since Governor [Andrew] Cuomo banned fracking in New York, and he has yet to provide a sustainable solution for the loss of jobs, taxes, and other revenue the development of the Marcellus Shale could have brought to Upstate New York. As Gov. Hogan follows in Gov. Cuomo’s footsteps, one has to wonder if Western Maryland will find itself in the same waiting game.”

“Let the news go forth to Congress and the White House: fracking can never be done safely,” said Chesapeake Climate Action Network Director Mike Tidwell. “The Republican governor closest to DC…has joined scientists and health leaders in agreeing that fracking must be banned. This is a win for Marylanders and for citizens nationwide as we move away from violent fossil fuels and toward sustainable wind and solar power.”